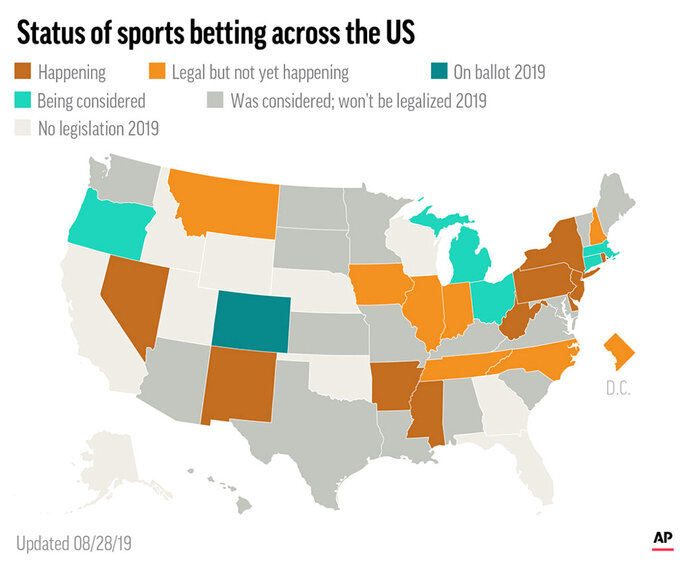 The status of sports betting in each state.; 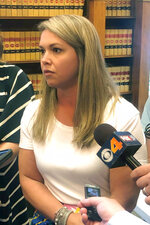 INDIANAPOLIS (AP) — Sports betting is days away from becoming legal in Indiana and the state's casinos are lining up to start collecting wagers.

Indiana will become the 12th state — and the first in the midst of major Midwest markets — with sports betting when a new state law takes effect Sunday.

At least three casinos — ones near Indianapolis, Chicago and Cincinnati — plan to open on-site sports wagering areas that day. Some others plan similar openings before the NFL season kicks off on Sept. 5.

The Indiana Gaming Commission voted Wednesday to approve sports wagering regulations. Eleven of the 13 state-regulated casinos and all three of its off-track betting parlors have received temporary sports betting licenses. The casinos are still working to launch mobile betting apps in the state.

WHEN WILL SPORTS BETTING START?

A flurry of sports books are set to open in early September as they gain approval from state regulators.

Caesars Entertainment is Indiana's biggest casino operator and is targeting a Sunday start for sports wagering at its Indiana Grand casino in Shelbyville, near Indianapolis. It plans to offer it at its OTB in downtown Indianapolis on Tuesday and at its Horseshoe Hammond casino just across the state line from Chicago the following day.

Rival Penn National is also jumping quickly with Sunday starts planned for its casinos that also tap big nearby metro areas: Ameristar East Chicago and Hollywood in Lawrenceburg, which is a short drive from Cincinnati and its northern Kentucky suburbs.

Plenty of hoopla will accompany the openings. Boyd Gaming says former Chicago Bears star Brian Urlacher will place the first bet at its Blue Chip casino in Michigan City on Sept. 5, while the Lawrenceburg casino plans a ceremony Sept. 7 with retired Cincinnati sports stars Anthony Munoz of the Bengals and Tony Perez of the Reds.

A WINDFALL FOR INDIANA?

Sports wagering generally provides only slim profit margins for casinos, though operators say it is a way to help draw in gamblers. Indiana's jump on neighboring states comes amid a $482 million — or nearly 18% — drop in gambling revenues at its casinos since 2012 amid competition from new casinos in Cincinnati and southern Michigan.

An Indiana legislative report projects that the state will collect only about $13 million a year in revenue from its 9.5% tax on the casinos' sports bets winnings.

Sports wagering revenue has fallen short of expectations in many states that quickly legalized it after the U.S. Supreme Court cleared the way with a ruling last year. The tax rates range widely among states: Pennsylvania set its rate at 36% — four times that of neighboring New Jersey — and Iowa's is near the bottom, at 6.75%.

Regulators are working on sports wagering rules in Illinois, which legalized it in June but hasn't set a date for it to begin.

WHAT ARE INDIANA'S RULES?

Gamblers must be 21 or older in order to place a bet. Indiana will allow the casinos to take wagers on dozens of professional, collegiate and international events, including football, basketball, baseball, auto racing, hockey, soccer, boxing, golf and Olympic competitions. No betting is allowed on high school or youth sporting events, or e-sports.

Gamblers will have to register and prove their age with a casino before being able to use a mobile wagering app. Those online apps, however, must use geofencing technology so that the bets are placed within the state borders, meaning any Chicago residents would have to cross into Indiana each time they wanted to place a bet using their cellphone.