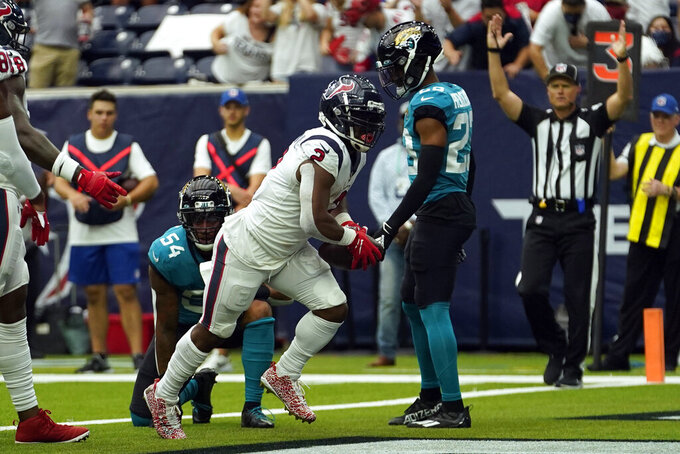 Houston Texans running back Mark Ingram II (2) runs for a touchdown as Jacksonville Jaguars' Damien Wilson (54) and CJ Henderson (23) defend during the first half of an NFL football game Sunday, Sept. 12, 2021, in Houston. (AP Photo/Sam Craft)

HOUSTON (AP) — As Houston was wrapping up its win over Jacksonville Sunday, coach David Culley found Mark Ingram on the bench to congratulate him on a successful debut with the Texans before delivering another message.

“Your presence on this football team and what you mean is very important,” Culley told him. “It ain’t just about yards, it’s about having you here.”

Teammates and coaches alike raved this week about Ingram’s leadership and approach to the game. They say the veteran running back added an ingredient the team desperately needed as it tries to rebound from last year’s 4-12 finish.

“Mark’s a fiery dude,” offensive coordinator Tim Kelly said this week as the Texans prepared for a trip to Cleveland. “He’s brought an edge here in the offensive room that I’m not sure we’ve had for a while.”

Culley and Ingram spent the last two seasons together with Baltimore, where Culley was an assistant coach. Ingram said this wasn’t the first time the coach had shared a similar sentiment with him.

“He’s always just encouraged me and emphasized that it was more than just the stats and stuff, just who I was and what I bring to the table,” Ingram said. “And I appreciate that. He’s always encouraged me that way.”

Just the mention of Ingram’s name brings a smile to the face of Culley, who spent decades as a college and NFL assistant before getting the Houston job.

“He’s one of those guys that you will never see down, he will never let anybody else get down,” Culley said. “When we first got him, I felt like he was a reflection of what I was all about as a coach and what I want out of our players.”

While Ingram’s experience and attitude are certainly a bonus for the Texans, his signing was just one piece of a larger plan to improve a running game that was among the worst in the NFL last season. Along with Ingram, the Texans added Phillip Lindsay and Rex Burkhead this offseason to join David Johnson in the backfield.

Ingram led the way in the first game, running 26 times for 85 yards and a touchdown as the Texans piled up 160 yards rushing. It was an encouraging performance from a team that managed 91.6 yards rushing a game last season.

Like the Texans, Ingram is trying to bounce back from a tough 2020. Ingram, who won the Heisman Trophy in 2009 with Alabama, had 1,018 yards rushing for the Ravens in 2019, but managed just 299 yards last season when he missed five games with an ankle injury and slipped to third string.

Ingram is thankful to have had Culley's support through the ups and downs of his last two seasons.

A three-time Pro Bowler, Ingram has 7,409 yards rushing with 63 TDs in his career.

Quarterback Tyrod Taylor said Ingram’s “energy is unmatched” and some of his younger teammates are surprised to see the boundless enthusiasm he has as he begins his 11th year in the NFL.

Ingram certainly takes his job seriously, but also tries to remember that it is a game and should be fun.

“When you don’t have fun with it, if you lose the love of it, I think you get exposed,” he said. “I just love playing ball, I love being with my guys, I love seeing them make plays, I love making plays, I love putting up points, I love watching the defense have turnovers, love hearing the crowd, love silencing the crowd on the road. It’s just fun.”