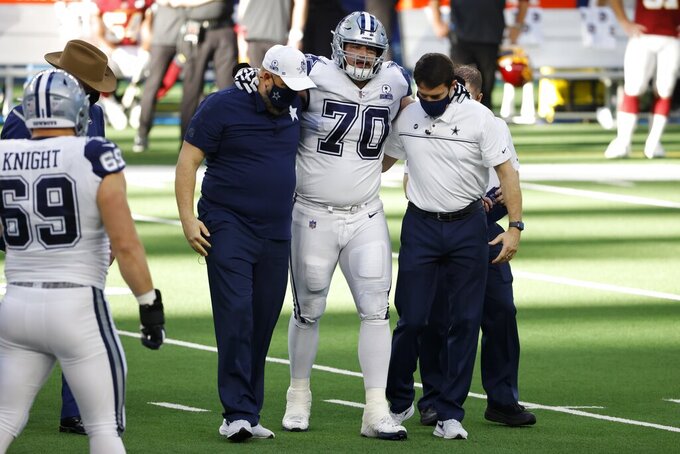 Dallas Cowboys guard Zack Martin (70) is assisted off the field by team medical staff after suffering an unknown injury in the first half of an NFL football game against the Washington Football Team in Arlington, Texas, Thursday, Nov. 26, 2020. (AP Photo/Ron Jenkins)

ARLINGTON, Texas (AP) — Dallas Cowboys offensive linemen Zack Martin and Cam Erving will be out several weeks if not longer after getting injured in the Thanksgiving loss to Washington.

Martin and Erving went out on the opening drive Thursday. Erving exited first with a sprained knee, and Martin injured his left calf on the final play before a field goal. Washington won 41-16.

A four-time All-Pro right guard playing right tackle for a line that has been in flux all season because of injuries, Martin is likely to miss consecutive games for the first time in his seven-year career. Martin missed a game earlier this season because of a concussion.

It's the second knee injury of the year for Erving. Signed as the backup tackle in the offseason, Erving was injured blocking on a field goal in the opener against the Los Angeles Rams and missed five games. He was making his fifth straight start at left tackle.

The Cowboys (3-8) haven’t had the same starting five in the offensive line for more than two consecutive games this season. Left guard Connor Williams is the only lineman to start every game in the same spot.

Dallas was supposed to play back-to-back Thursday games, but next week's visit to Baltimore was moved to Monday, Dec. 7. The Ravens are having COVID-19 issues that forced two postponements of a game against Pittsburgh that was supposed to be played Thanksgiving night.

The original starting tackles for Dallas are out for the season with injuries. Seven-time Pro Bowl left tackle Tyron Smith was limited to two games by a neck injury that required surgery. Right tackle La'el Collins didn't play at all before hip surgery.

With Martin and Erving sidelined, Dallas probably will go back to the two young undrafted tackles that have seen extensive action this season and were the replacements Thursday.

Brandon Knight, a second-year player, started four games at left tackle while Erving was out the first time. Rookie Terence Steele started the first nine games at right tackle before his struggles forced the Cowboys to move Martin into his spot.