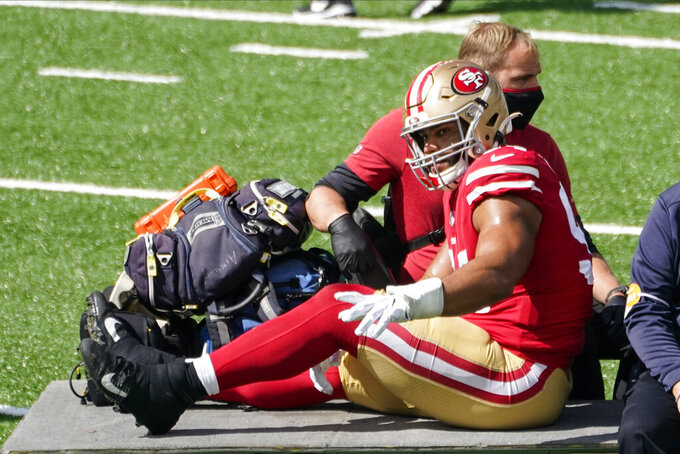 San Francisco 49ers' Solomon Thomas (94) is carted off the field during the first half of an NFL football game against the New York Jets, Sunday, Sept. 20, 2020, in East Rutherford, N.J. (AP Photo/Corey Sipkin)

The injury bug that has thrown a wrench into the San Francisco 49ers' season seems to have no bounds.

The 49ers were waiting for MRI results Monday on potential season-ending injuries to defensive linemen Nick Bosa and Solomon Thomas because the MRI truck expected to meet them at their hotel in West Virginia broke down.

The broken down truck, however, is the least of the concerns for coach Kyle Shanahan.

Along with the injuries to two starting defensive linemen, the Niners are also dealing with a high ankle sprain to quarterback Jimmy Garoppolo that likely will sideline him this week, a sprained MCL that has shut down Raheem Mostert and injuries to running back Tevin Coleman (knee), defensive tackle D.J. Jones (ankle) and linebacker Dre Greenlaw (thigh) that all came during a 31-13 win against the New York Jets on Sunday.

Shanahan said there was a lot of frustration when the team arrived for its stay at The Greenbrier resort before visiting the Giants next week.

“You do that pretty much every Sunday night,” he said. “Usually you do it after losses, but this was one that felt really good about the win but we had some time to (complain) a little bit about some of our unluckiness with injuries, especially taking the plane ride together and being here last night at the hotel together. It’s also a good challenge, too.”

The rough day at the Meadowlands followed a bad start to the 10-day East Coast trip when the team had to switch airports because its charter plane had been hit on the runway, leading to a six-hour delay.

The Niners hope this wave of injuries doesn’t impact their season the way it did two years ago when a season-ending knee injury to Garoppolo led to a 4-12 campaign.

“We’re a lot more equipped for this than we were a few years ago,” Shanahan said. “We have a lot of other good guys, too. You can’t replace some of those guys we lost, of course. But collectively, I know we’ve got a good team and it’s not just me that feels that. I know our players know that. And I know a lot of guys are excited for opportunities.”

The Niners were upset after the game because they felt the new turf at MetLife Stadium was especially sticky and might have contributed to the injuries.

They have to return to the same field next week to face the Giants and talked to the league about the situation. Shanahan said he hopes his players can get assurances of the safety of the field before returning.

“We have to come back here and play again on the same surface,” defensive lineman Arik Armstead said. “That’s anxiety provoking to see that happen and know that you have to deal with it again.”

Pass defense. After allowing the fewest yards passing in 10 years last season, the Niners shut down Sam Darnold and the Jets despite missing many key pieces on defense. San Francisco allowed only 173 net yards passing, with 74 coming on a late garbage-time drive that gave the Jets their only TD of the game.

The new turf at MetLife Stadium. The 49ers players complained before the game even started of the sticky surface on turf that had been played on only once before. The problems only got worse as the game went on, with several players leaving with injuries.

TE Jordan Reed. With Kittle sidelined, Reed delivered in just his second game since 2018. He played 10 snaps last week after missing all of 2019 with a concussion but was used much more against the Jets. He had six of his seven catches and both of his touchdowns in the first half, joining Vernon Davis and Terrell Owens as the only 49ers players since 2000 with at least six catches and two TD receptions in the first half of a game.

Coleman. About the only thing outside of injuries that didn’t go well for the Niners was handing the ball to Coleman. He had 14 carries for 12 yards for an average of just 0.86. That’s the lowest for a Niners player with at least 12 carries since Delvin Williams gained 9 yards on 13 carries (0.69 ypc) vs. the Rams on Nov. 21, 1976.

Ford missed the game with what initially was described as neck spasms but is now being called a back injury. His status this week remains unknown. The team agreed to a deal with free agent Ezekiel Ansah, who will officially sign when he passes the COVID-19 protocol. ... Kittle will rejoin the team this week and possibly could return Sunday.

23.09 mph. That’s the speed Mostert reached on the first play from scrimmage in the game when he raced 80 yards for a TD run. That’s the fastest speed in the past three seasons, according to NFL NextGen stats. Mostert is the first player since Chicago’s Cecil Turner in 1970 to score a TD of at least 75 yards in each of the first two weeks of a season.

The Niners visit the Giants on Sunday. The 49ers spent a week on the road between games back East twice last season, topping 40 points and 500 yards in wins at Cincinnati and New Orleans.