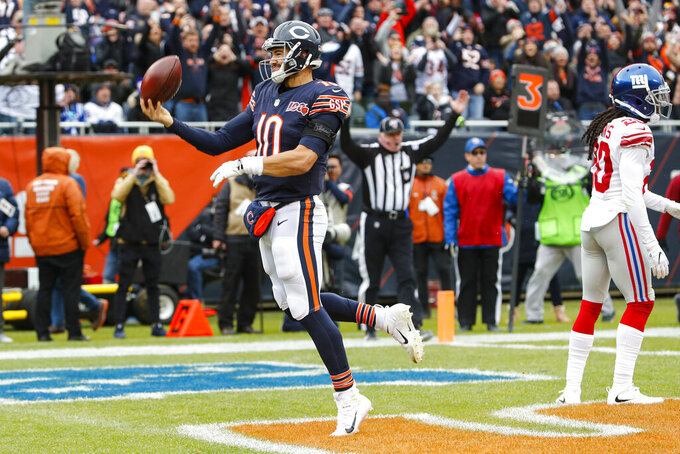 LAKE FOREST, Ill. (AP) — It's been difficult for Chicago Bears quarterback Mitchell Trubisky to get the offense moving this season, even under normal circumstances.

This week's challenge looks all the greater and only part of it has to do with a shorter work week while playing a Thursday game against the Detroit Lions on Thanksgiving.

Trubisky will be trying to deal with an attack further diminished by injuries at tight end and wide receiver.

Starting wide receiver Taylor Gabriel and tight end Ben Braunecker are likely to miss the game because of concussions. Coach Matt Nagy on Tuesday said it's unlikely either could be ready for the game.

"Injuries are one of those things, you've just got to deal with it," Trubisky said.

Tight end Trey Burton is on injured reserve (calf) and tight end Adam Shaheen is out with a foot injury. Braunecker and Gabriel made TD catches in the Bears’ 20-13 win on Nov. 10 over the Lions.

So the Bears will be relying heavily on their fourth and fifth tight ends in J.P. Holtz and recent practice squad callup Jesper Horsted. They could also have wide receiver Riley Ridley active for the first time, as well.

"I mean, they've been around in training camp and stuff so we've got a good chemistry with those guys," Trubisky said. "But it's got to be an exciting opportunity for those guys to step up and see their first action.”

Horsted played wide receiver at Princeton and was an undrafted free agent this year, before converting to tight end. In a brief debut last week, he made a 4-yard reception.

"It's like different body positions, so starting in that three-point stance is different for running routes and for blocking," Horsted said of his switch. "I would say also it's all just kind of new.

"So it takes time both to get adjusted to it and to learn what's good and what's bad in the position."

Ridley was drafted in the fourth round and has been on the active roster all season without suiting up on game day, but Nagy said the former Georgia standout has been patient.

"It's hard, these kids come from these big programs that are successful, the big fish in the small pond and it kind of flips on them, but he's been a true pro," Nagy said. "He's trying to learn every day after practice. He takes advice, very patient.

"I know it's killing him, because he wants to be out there. With Taylor here up in the air, we'll see what kind of chance this gives Riley."

Even when the Bears were at full strength, their offense struggled.

They're ranked 29th on offense and haven't been higher than that since after the season opener, when they were 28th. The passing attack is 30th and hasn't been better than 28th since Week 1.

Now they've fallen into a rut of scoring little or nothing in the first half of games.

Then in each of the past five games, they've come out of the locker room at halftime with touchdown drives.

"What I take from that is when things aren't going well our guys aren't just folding up shop," Nagy said. "They're understanding, let's make some corrections and let's get better.

"But that's probably our No. 1 objective right now. Let's come into these games with a faster start and let's see what happens when we do that."

It's possible playing only four days after their most recent game helps solve the problem.

"Obviously playing a team in our division that we are familiar with, hopefully that helps us get off to the faster start," Trubisky said.

By David Brandt 57 minutes ago
By Teresa M. Walker an hour ago
By Josh Dubow 5 hrs ago
By Tom Withers 12 hrs ago
By Dennis Waszak Jr. 12 hrs ago