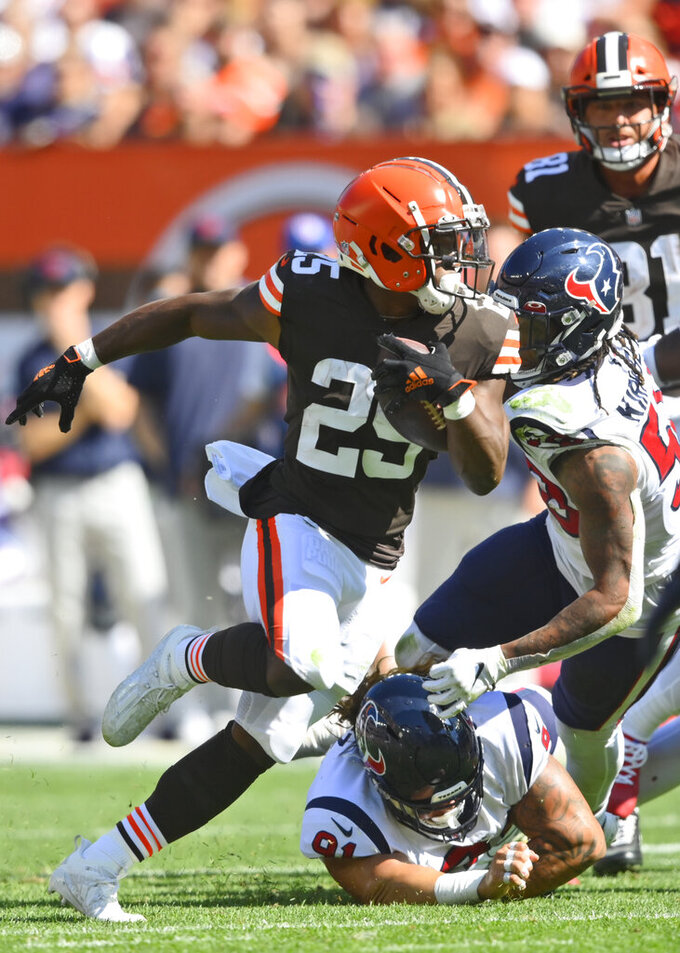 Cleveland Browns running back Demetric Felton (25) runs for a 33-yard touchdown after a pass during the second half of an NFL football game against the Houston Texans, Sunday, Sept. 19, 2021, in Cleveland. (AP Photo/David Richard) 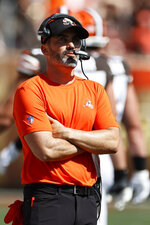 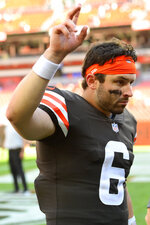 It was a no-brainer: Run the ball.

Stefanski turned to Nick Chubb and Kareem Hunt — Cleveland's dynamic and devastating backfield duo — to carry the Browns through much of a 31-21 win over the Houston Texans on Sunday.

It's a proven formula he may have to turn to again.

Mayfield's injury, which happened when he tried to make a tackle after throwing an interception, and Landry being ruled out with a sprained medial collateral ligament that could sideline him several more games, prompted Stefanski to alter his game plan.

He shortened the pass routes, helping Mayfield make quicker reads and throws to Cleveland's tight ends before giving the Texans healthy doses of Chubb and Hunt with the game still in question in the fourth quarter.

“A big-boy drive,” Stefanski called it.

Hunt said he and Chubb relish the responsibility of delivering the knockout punch.

“We know what we’re capable of doing running the football and we’ve just got to come out there and make it happen when the team needs us,” he said. “Definitely we needed a touchdown and a good drive. Coach Kevin does a great job of calling plays.”

Stefanski knew Mayfield was a target after hurting his shoulder, and didn't want to expose him with deep drops. The Browns only threw toward their wide receivers five times as tight ends Austin Hooper (five catches, 40 yards) and Harrison Bryant (four for 49) became the primary targets.

While it appears Landry, a five-time Pro Bowler and team leader, could miss multiple games, the Browns may get a lift with Odell Beckham Jr. potentially ready to make his return from major knee surgery last November.

Stefanski said Beckham’s comeback is independent of anyone else’s status, and no decision has been made on whether he'll play Sunday against Chicago.

“We’ll continue to bring him along and see when he’s ready to go,” Stefanski said.

Until then, he can always lean on Chubb and Hunt.

Mayfield's growth as a game manager was on full display. He didn't force anything, took what Houston's defense gave him and finished 19 of 21 for 213 yards. He completed his last 10 passes following the pick on a ball rookie Anthony Schwartz gave up on.

Sure, many of Mayfield's throws were short, but he made them all and showed toughness by not missing a snap after his shoulder popped out.

The new defense still looks like the old one. For the second straight week, Cleveland's front didn't create enough pressure, and the Browns struggled getting off the field on third down as the Texans converted 7 of 13.

The expected headache star ends Myles Garrett and Jadeveon Clowney were supposed to create has yet to materialize.

A sixth-round pick from UCLA, Felton caught a short pass from Mayfield, darted up field, pulled off a startling spin move to evade two defenders, broke a tackle and outran the Texans for a 33-yard score.

Also, Browns second-year safety Grant Delpit finally made his pro debut after missing 2020 with a torn Achilles tendon and the opener in Kansas City due to a hamstring injury.

Schwartz was a bright spot in the opener, but not so much Sunday. The speedster broke off his deep middle route and didn't contest a ball that was snared by Texans safety Justin Reid, who then ran over Mayfield.

When he returned to the sideline, Schwartz, praised for his mental awareness in Week 1, got an earful from Stefanski.

"That is a mistake that a young player makes and he will not make it again,” Stefanski said.

Stefanski said Mayfield was sore but otherwise fine after his shoulder scare. ... The coach had high praise for starting left tackle Jedrick Wills Jr., who started despite not practicing all week and played into the third quarter before being replaced.

A potential Beckham return could provide a big jolt for the Browns, who will host the Bears on Sunday. Chicago's quarterback situation is a bit cloudy after starter Andy Dalton, someone the Browns know well from his days in Cincinnati, injured his knee Sunday. If Dalton can't go, rookie and former Ohio State star Justin Fields will start.