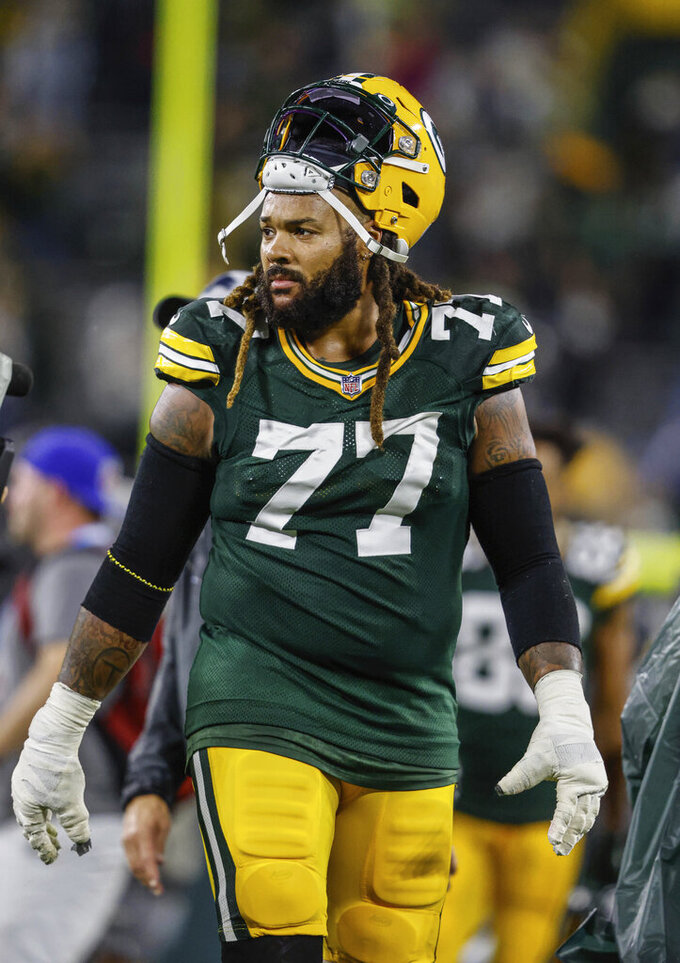 2020 All-Pro left tackle David Bakhtiari hasn’t played all season as he recovers from a torn anterior cruciate ligament. Elgton Jenkins switched positions to fill in for Bakhtiari before getting injured himself. 2020 All-Pro center Corey Linsley left for the Los Angeles Chargers.

“Honestly that’s just the standard,” right tackle Billy Turner said. “That’s the standard here in Green Bay and it’s been that way for a long time.”

Green Bay probably will have to play without Jenkins again Sunday when the Packers host the Pittsburgh Steelers. Jenkins is listed as doubtful as he continues to deal with an ankle injury.

Although Pittsburgh had its NFL-record streak of 75 consecutive games with a sack end last week in a 24-10 loss to the Cincinnati Bengals, the Steelers were playing without 2020 All-Pro outside linebacker T.J. Watt due to a groin injury. Watt is expected to play at Green Bay.

“I watched all their sacks from the last two years, and I think I got nightmares from it,” Packers coach Matt LaFleur said of the Steelers. “They do a great job of getting push in the pocket, they’re really sound in their rush lanes and they’ve got game wreckers up front.”

The Packers got accustomed to relying on a variety of line combinations last season when they scored a season-high 31.8 points per game even as injuries forced Jenkins and Turner to play multiple positions. But many of the Packers’ starting linemen this season didn’t play major roles a year ago, if they were even on the team. Although these changes help explain why Green Bay averages just 3.4 yards per carry - down from 4.8 last season - the line has done a solid job in pass protection.

“Things have started meshing,” left guard and 2020 sixth-round pick Jon Runyan Jr. said. “We’ve got a lot of young guys there, but we all feel really good.”

Turner is the only veteran lineman who has started at the same position for each of the Packers’ first three games.

“They just keep getting a little bit better every game with their fundamentals and putting themselves in a position to block really good players,” offensive line coach Adam Stenavich said of the rookies. “They still have a really long way to go. So they’re doing fine. But I think they can be a lot, lot better.”

Yosh Nijman (pronounced NY-man), a 2019 undrafted free agent from Virginia Tech, made his first career start at San Francisco. He had a rough first series that included a face-mask penalty, but performed well the rest of the night.

“I’m just really proud of the way he battled,” Rodgers said after the 49ers game. “I mean, he’s going up against one of the top three premier pass rushers in the game for most of the game, And we gave him some help, because you’ve got to. Bosa’s such a stud. But there were times where he had no help, and I thought he held up real well.”

Stenavich said Bakhtiari often sat next to Nijman on the bench in San Francisco talking things over with him and making sure he kept his poise.

“I just want my teammates to know they can count on me,” Nijman said.

Green Bay likely will continue counting on Nijman as long as Jenkins and Bakhtiari remain unavailable.

NOTES: WR Marquez Valdes-Scantling (hamstring) won't play Sunday. CB Kevin King (concussion) is doubtful. LB Krys Barnes (concussion), DL Jack Heflin (ankle) and S Vernon Scott (hamstring) are questionable. ... RB Aaron Jones says he's continuing to play with the necklace that honors his late father and includes some of his dad's ashes. The necklace came off during the Packers' Sept. 20 victory over Detroit, but Jones was able to get it back. Jones said the equipment staff designed a pocket inside his jersey, so he can put the item there without worrying about it falling out.

By Joe Reedy 3 minutes ago
By Dennis Waszak Jr. an hour ago
an hour ago
3 hrs ago
4 hrs ago