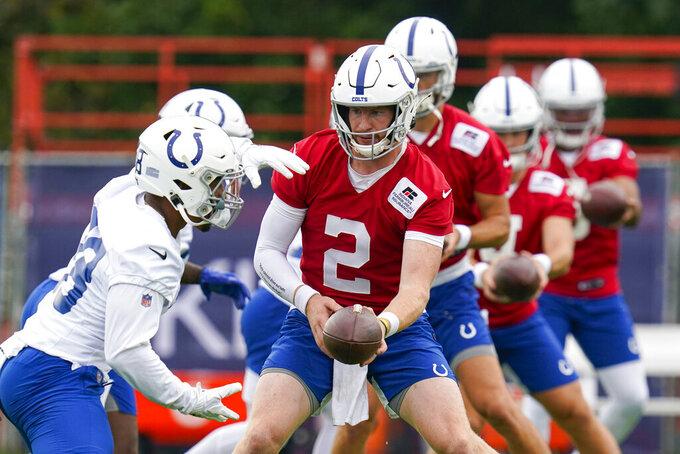 Offensive coordinator Marcus Brady said Wentz was injured during Thursday's workout and missed the final practice period. Doctors were still evaluating the injury Friday and Brady said it was unclear when Wentz may return.

Kelly was diagnosed with a hyperextended elbow and is expected to miss a couple weeks.

The biggest concern was Wentz, who has an extensive injury history.

“He got hurt during a team period, he just felt a little twinge in the foot," Brady said. “We should know something shortly."

The Colts acquired Wentz in a March trade with Philadelphia, hoping the second overall pick in the 2016 NFL draft could regain his form and become their longtime franchise quarterback.

Wentz had the Eagles in Super Bowl contention in 2017 when he was one of the MVP front-runners. A torn anterior cruciate ligament in his left knee ended his season with three regular-season games remaining. He hasn't been the same since and last season was the worst of his five-year career.

The injury list also includes a broken bone at the base of his right thumb in 2015; a hairline rib fracture in August 2016; a fractured vertebrae in his back during the 2018 season; and a concussion in January 2020.

Kelly, who has played at a Pro Bowl level as the offensive line's signal-caller the past several seasons, also was injured Thursday in an inadvertent collision with running back Marlon Mack.

Wentz and Kelly were replaced in the lineup with two second-year players: quarterback Jacob Eason and center Danny Pinter, who will likely continue to plug those holes.

“We just want to continue to get him reps," Brady said when asked about Eason. “He made some good plays, he made some bad plays, and we need to make sure that he's learning from those mistakes."

It's been a challenging first week of practice for Indianapolis.

In addition to Friday's absences, two-time All-Pro linebacker Darius Leonard has not practiced since having ankle surgery in June. Two-time Pro Bowl tackle Eric Fisher remains on the physically unable to perform list. Defensive end Dayo Odeyingbo is on the non-football injury list. Fisher and Odeyinbgo, Indy's second-round draft pick, are both recovering from torn Achilles tendons they suffered in January.

Indy also has been without coach Frank Reich since he tested positive for COVID-19 late last week. Four players — cornerbacks T.J. Carrie and Xavier Rhodes, defensive end Al-Quadin Muhammad and offensive tackle Julien Davenport — are on the reserve/COVID-19 list. Davenport, vying with Sam Tevi and Will Holden, for left tackle as the Colts await Fisher's return, was added Thursday night.

While general manager Chris Ballard has said Reich was fully vaccinated, the Colts have one of the league's lowest vaccination rates among players. Ballard said Monday more than 60% of the roster have had at least one vaccination shot.