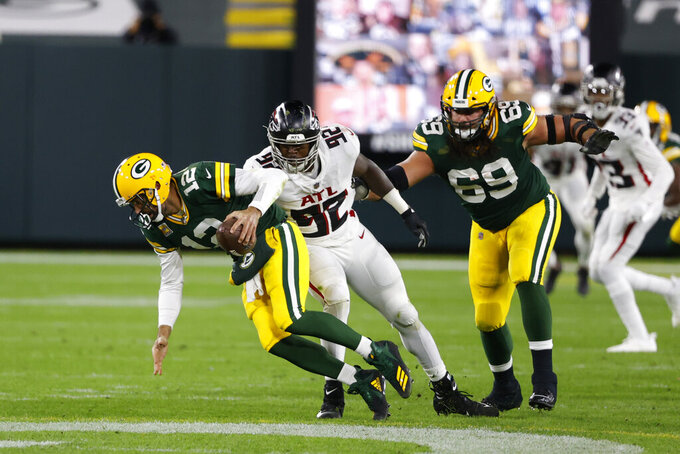 Atlanta already was entering its Monday night game without safeties Ricardo Allen (elbow) and Keanu Neal (hamstring), as well as cornerback A.J. Terrell (COVID-19 reserve). That beleaguered secondary took more hits when safety Damontae Kazee got carted off the field and safety Jaylinn Hawkins left with a concussion in the second quarter.

The Falcons’ decimated defense was no match for Aaron Rodgers in a 30-16 loss to the unbeaten Green Bay Packers (4-0). Rodgers threw for 327 yards and connected with tight end Robert Tonyan on three of his four touchdown passes.

“I think when you get to that spot, it’s all hands on deck,” Falcons coach Dan Quinn said of the hits his secondary took. “Whether it’s putting a linebacker at safety, corners jumping into the space, by any means necessary you go through them.”

“We’ve got to turn it up a notch,” said Todd Gurley, who scored both Falcons touchdowns. “We’ve got to make something happen. Something’s going to have to give.”

Slow starts are nothing new for the Falcons.

Atlanta started 1-7 in 2019 and 1-5 in 2018 before rallying late each year to finish 7-9. The Falcons remain confident it’s early enough in the season for them to turn things around.

“It’s certainly not the start any of us envisioned or wanted,” Quinn said. “It’s confusing. It’s frustrating for everybody. But I also told them it’s the people inside the locker room that get to fix that and get to change that. Nothing’s been decided.”

The Falcons will have a tough time changing much unless they get healthier. Their injuries aren’t limited to defense.

Julio Jones came back after missing a 30-26 loss to Chicago last week, but his hamstring issues cropped up again and prevented him from playing the second half. Jones still had four catches to increase his career total to 812, enabling him to surpass Roddy White as the franchise’s all-time leader.

With Jones sidelined for half the game, the Falcons’ leading receiver was Olamide Zacchaeus, whose eight catches matched his career total heading into the night.

The Falcons even were missing kicker Younghoe Koo due to a groin injury. Elliott Fry replaced him and made a 23-yard field goal while going 1 of 2 on extra-point attempts.

The Falcons have enough talent on offense to stay afloat without their biggest stars. They don’t have that luxury on defense, as they’ve now given up 34.5 points per game.

The Falcons never led this one at all because Green Bay scored touchdowns on three of its four first-half possessions to grab a 20-3 lead. Green Bay’s only first-half series that didn’t result in a touchdown ended less than a yard shy of the goal line as Deion Jones stuffed Jamaal Williams on fourth-and-goal.

Atlanta started to run out of healthy bodies in the secondary. Safety Jamal Carter, who had just been activated from the practice squad earlier in the day, was on the field for much of the second half.

“He was one that was able to go play after Hawkins was injured,” Quinn said. “And (Sharrod) Neasman was one that jumped in after Kazee was injured. So those are moments when guys are called upon, we expect them to deliver. As you go through those injuries, that’s part of it. They’ve gotten their reps at practice.”

The Falcons did earn some praise from Packers coach Matt LaFleur after holding Green Bay to its lowest point total of the season. That was due in part to the Falcons holding the ball for over 10 ½ minutes on a 20-play, 94-yard drive in the second quarter that resulted in a field goal.

“That was one of the hardest-hitting defenses I feel like I’ve seen in my time in the NFL,” said LaFleur, who was a quarterbacks coach on Quinn’s Atlanta staff from 2015-16. “And they were battling to the end. There was zero quit in that football team.”

The Falcons will need that kind of tenacity in abundance as they try to salvage their season with so many players hurt.

“I think we just hit our wall, you know what I mean,” Falcons defensive end Dante Fowler Jr. said. “I feel like it can’t get no worse than this.”