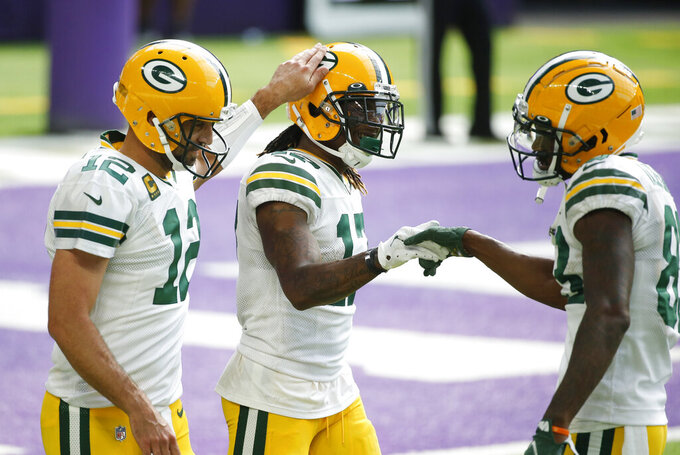 Green Bay showcased the resourcefulness of its offensive line Sunday as the Packers didn’t allow a sack despite playing parts of the game without multiple projected starters.

That trait will get tested again and again the rest of the season.

Packers coach Matt LaFleur said Monday that right guard Lane Taylor is expected to miss the rest of the season. Taylor, who played only the first two games last year before a season-ending biceps injury, was carted off the field after hurting his right knee in the second half of a 43-34 victory over the Minnesota Vikings.

“It’s significant, obviously,” LaFleur said Monday. “My heart goes out to him. Just battling back from the significant injury that he had last year and to get to a position where he was in our starting lineup, certainly he will be missed. I feel bad for him as an athlete, as a man. It takes a lot to come back from a significant injury, and he put the time in and put himself in a great position to have a great year.”

The offensive line already has taken plenty of hits.

Billy Turner was the projected starter at right tackle, but a knee injury prevented him from playing against Minnesota. LaFleur said Monday that “hopefully we get him back in the fold here sooner than later.”

The Packers responded by shifting Elgton Jenkins from left guard to right tackle and having Lucas Patrick fill in at left guard. Then Patrick left in the first half with a shoulder injury and Taylor got hurt late in the game. That caused Rick Wagner to take over at right tackle, Jenkins to move back to left guard. Jon Runyan Jr., a rookie sixth-round draft pick from Michigan, made his NFL debut at right guard.

Through it all, Green Bay continued controlling the line of scrimmage as the Packers gained 522 yards.

Now they need to keep it up as the coaching staff tries to figure out the right combination for Sunday’s home opener against the Detroit Lions.

Perhaps that means a second chance for Wagner, who signed a two-year, $11 million deal with the Packers after getting released by Detroit in March. Wagner failed to win the starting right tackle spot in training camp, but LaFleur said Monday that the former Lion “did an outstanding job” after getting pressed into duty against the Vikings.

Jenkins has shown he’s able to play just about anywhere on the line if the Packers decide to move him around. Runyan got his feet wet Sunday and showed he’s ready if called upon.

That offensive line played a major role in helping the Packers show Minnesota they remain the team to beat in the NFC North. Whether Green Bay repeats as the division champion will depend in part on whether that line continues playing well now that its depth has taken a major hit.

“It’s only one game,” LaFleur said. “So our guys are going to have to put consistent performances like that together on a weekly basis.”

Aaron Rodgers looks in midseason form, as he threw for 364 yards and four touchdowns without an interception. The Packers took plenty of heat in the offseason for not adding to their receiving corps, but Davante Adams, Allen Lazard and Marquez Valdes-Scantling all had touchdown catches Sunday. Adams had 14 receptions for 156 yards and two scores.

The defense must improve its fourth-quarter execution after allowing the Vikings to score touchdowns on each of their final three possessions.

Pretty much the entire offense has its stock on the rise after that performance. ... Cornerback Jaire Alexander had an interception and produced a safety by sacking Kirk Cousins in the end zone. The only other players in the last 20 years to collect an interception, sack and safety in the same game are Rocky Boiman (2003), Adalius Thomas (2006), James Harrison (2008) and Calais Campbell (2016). ... Linebacker Krys Barnes, an undrafted free agent from UCLA activated from the practice squad Saturday, ranked second on the team in tackles and made two stops behind the line of scrimmage.

Wide receiver Equanimeous St. Brown was inactive for Sunday’s game after missing the entire 2019 season with an ankle injury.

The injuries weren’t limited to the offensive line. Defensive tackle Kenny Clark left in the first half with a groin injury and didn’t return. LaFleur had no update on Clark’s status Monday.

The first order of business will be figuring out the right combination on the offensive line as the Packers prepare for a home game against Detroit.