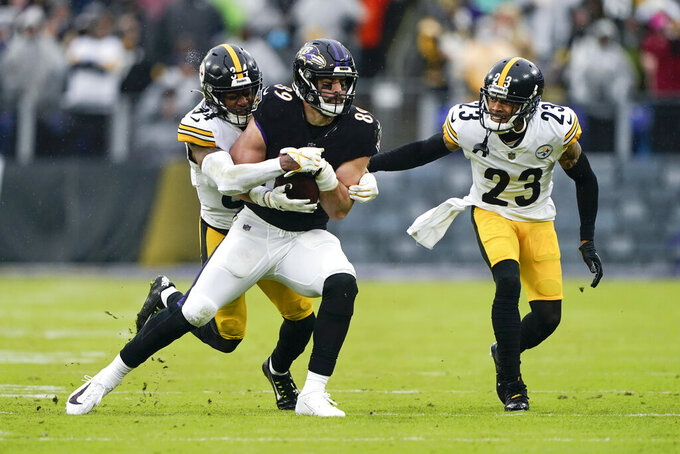 BALTIMORE (AP) — Lamar Jackson described his ankle problem as day to day, even though there are no more games for the Baltimore Ravens to prepare for.

At least the weekly injury reports can stop now.

From start to finish this season, the Ravens practiced and played under a cloud of uncertainty. The constant injuries made each week an adventure as the team looked down its depth chart and tried to get by. For over half the season, Baltimore overcame almost everything, although the victories were rarely easy. Then the Ravens endured one of the most excruciating six-game losing streaks imaginable, dropping five of those games by three points or fewer as a playoff spot slipped away.

“I feel like my team never blinked,” Jackson said. “Guys going down right before the first game of the season, then guys started going down during the season. ... We still managed to have hope, to have fight at the end of the season.”

By then, Jackson wasn't able to contribute. He missed the final four games with an ankle injury he described as a bone bruise. Backup Tyler Huntley performed admirably at first but struggled to avoid turnovers in the final two games. The Ravens even had to turn to Josh Johnson once because Huntley ended up on the COVID-19 list.

The secondary became so decimated Baltimore allowed 525 yards passing to Joe Burrow in a huge game at Cincinnati. The backfield wasn't as dynamic as expected, because running backs J.K. Dobbins and Gus Edwards went out with major knee injuries before the season even started.

“It's been quite a season. We could probably write a book about it,” offensive coordinator Greg Roman said in the week leading up to the final game. “It's like a Larry David episode.”

It was no laughing matter at times, but one thing the Ravens can learn from this season is that luck does sometimes even out. They played nine games decided by three points or fewer — winning the first four and then losing the last five.

Baltimore can only hope its injury luck evens out in the same way in 2022.

The big question coming into the season was whether Jackson and the Ravens could become more balanced on offense. They ranked first in the NFL in rushing in 2020 and dead last in passing.

For a while, Baltimore really seemed to be making strides. Three of the top four performances of Jackson's career — in terms of yards passing — occurred in a three-game stretch early this season, culminating in a spectacular 442-yard effort in an overtime win over Indianapolis.

However, even before his injury, Jackson was beginning to struggle. He ended the season with a career-high 13 interceptions, even though he played in only 12 games.

The possibility of a long-term contract for Jackson will remain a big story for the Ravens this offseason.

Now it's the defense that is coming off a huge split: The Ravens were No. 1 in the NFL against the run and No. 32 against the pass. That's not an easy way to navigate the current NFL, and Baltimore desperately needs its secondary to be healthier and more effective next season.

Don't expect any unnecessary drama, even after such a disappointing season. Even as it became apparent that this wasn't Baltimore's year, there were few signs of dissension. The Ravens seemed to understand what they were up against and didn't become too down on themselves, but they also didn't lose belief.

“If you're going to talk about, it's not what happens, it's how you respond, then you better be ready to live it, I guess," coach John Harbaugh said after the team's finale, a 16-13 overtime loss to Pittsburgh on Sunday. “They lived it.”

Justin Tucker had another tremendous season for the Ravens, setting an NFL record with a 66-yard field goal to beat Detroit in September. Tight end Mark Andrews set franchise records with 107 catches for 1,361 yards.

Baltimore is slotted into the 14th pick in the draft, which would be the team's highest selection since it took tackle Ronnie Stanley at No. 6 in 2016.