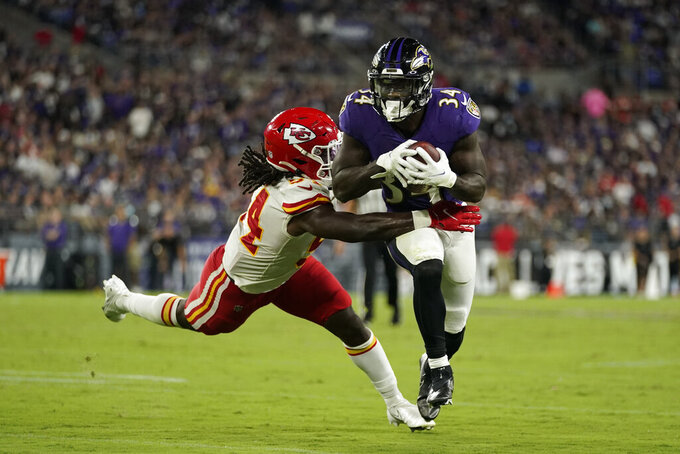 By that point, they had every reason to feel confident.

“We have to have an array of things throughout the season to have ready for those situations,” offensive coordinator Greg Roman said. “It’s interesting. Whatever plays we run in the game, there’s also a lot, lot, lot, lot more that we didn’t run. Things for that type of situation, the players are working on that stuff every week.”

Lamar Jackson picked up the first down on that final fourth-and-1, and the Ravens finished with 251 yards rushing in their 36-35 victory over the Chiefs last weekend.

A couple of weeks ago, Baltimore's running back group was decimated by injuries, and the team was quickly collecting available veterans in an effort to fill its many holes.

Now, the Ravens are right where they've been at the end of each of the past two seasons — ranked No. 1 in the NFL in rushing.

“We made a lot of progress last week with all the new guys that are here. We were able to clean up some things," Roman said Thursday. “Credit to our offensive staff (and) all the position coaches.”

The Ravens lost J.K. Dobbins and Gus Edwards for the season before it even started. Although running backs sometimes seem interchangeable these days, Baltimore needed a significant overhaul at the position without much time to pull it off.

Ty'Son Williams had no NFL carries to his credit, and newcomers Latavius Murray, Devonta Freeman and Le'Veon Bell were just arriving.

“I think if you look back maybe even a few years ago, and to think if we were all in the same room, it would be a cap problem or something like that, right?” Murray said.

Through two games, the Ravens have averaged 220 yards on the ground. They've extended their streak of 100-yard rushing games to 41, two shy of the league record.

Baltimore's top rusher is its quarterback, and it helps that Jackson has been healthy — although he did miss practice Thursday because of an illness. Jackson rushed for more than 1,000 yards each of the past two seasons, and he's at 193 so far in 2021.

“He's a dynamic player who has rare ability, rare talent, and he touches the ball 67 times a game, 70 times a game,” said Detroit coach Dan Campbell, whose team hosts Baltimore this weekend.

“Look, you play the odds, you do everything you can to limit their explosives, but inevitably, even as good as you can play, you look, they rush for 100 yards, what is it, 41 consecutive times? That’s what they do.”

Williams is Baltimore's leading rusher aside from Jackson. He's run for 142 yards on 22 attempts — 6.5 yards per carry. Murray has 64 yards on 19 carries with a couple of touchdowns.

“There's a lot of ways that we can hurt you, and again, it starts with Lamar just being beside you," Murray said. “Not knowing if he's going to keep it or give it, that right there is just difficult in itself. Then with all the different things that we’re doing, coming at you north and south and then getting the ball outside, it’s just tough on the defense.”

Freeman has only two carries this season, but one of them went for 31 yards. Bell has been on the practice squad. So the Ravens still have other options they can turn to — and more wrinkles they can add.

“There’s a lot that goes into this, and you try to choose wisely on game day,” Roman said. "I think we ran 36 different runs in that game, completely different runs, and I promise you, we had a lot more on the shelf.”