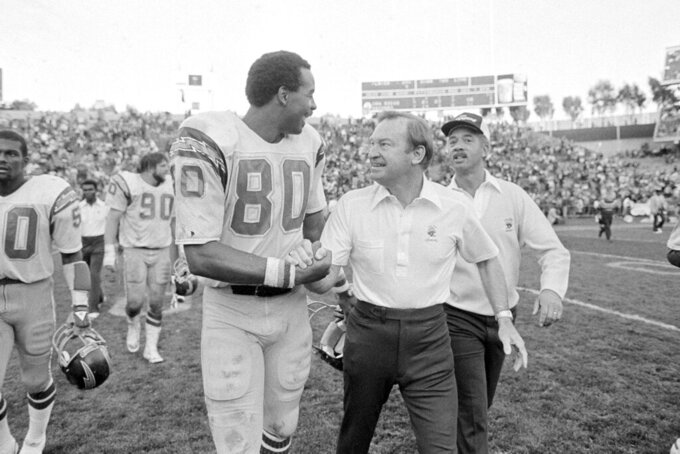 FILE - San Diego Chargers head coach Don Coryell congratulates Chargers tight end Kellen Winslow (80) after having a great day against the Oakland Raiders at the Oakland Coliseum, Nov. 23, 1981. The Chargers beat the Raiders 55-21. Innovative offensive coach Don Coryell, who helped usher in the modern passing game to the NFL, was picked as a finalist for the Pro Football Hall of Fame’s class of 2023. The former Chargers and Cardinals coach was announced Wednesday, Aug. 24, 2022, as the candidate from a group of 12 coaches and contributors.(AP Photo/Paul Sakuma, File)

Innovative offensive coach Don Coryell, who helped usher in the modern passing game to the NFL, was picked as a finalist for the Pro Football Hall of Fame’s class of 2023.

The former Chargers and Cardinals coach was announced Wednesday as the candidate from a group of 12 coaches and contributors. Coryell will get into the Hall if he is supported by at least 80% of the full Hall of Fame panel of voters next January.

But his impact on the game with his famous “Air Coryell” offense in San Diego was transcendent as he took advantage of rule changes that opened up the passing game in the late 1970s and put together an offense that still influences the game today.

After a successful collegiate stint at San Diego State where he helped groom future Hall of Fame coaches John Madden and Joe Gibbs, Coryell took over the St. Louis Cardinals in 1973.

He led a franchise that won at least 10 games only twice in 53 seasons before he arrived to three straight double-digit win seasons and the team's only two division titles in St. Louis with Jim Hart as his quarterback. Coryell won Coach of the Year in 1974.

But his greatest success came when he took over the Chargers early in the 1978 season and teamed with Hall of Fame quarterback Dan Fouts to form one of the NFL's most dynamic passing games.

With an offense that featured pre-snap motion, only one running back and thrived on throwing the ball downfield, the Chargers changed how offenses played the game.

The success was immediate with the Chargers making the playoffs in Coryell's first four full seasons with back-to-back trips to the AFC title game in 1980 and '81.

A poor defense prevented San Diego from reaching the Super Bowl and the team then failed to post a winning record in his final four seasons.

But during his tenure, the Chargers led the NFL by scoring 26.2 points per game, averaging 390.8 yards per game with 279.5 yards passing per game.

The gap in yards passing between the Chargers and second-place San Francisco (223 per game) was bigger than the gap between the 49ers and the third-worst passing team of that era, the Rams (170.5 yards per game).

Coryell, who was the first coach to win at least 100 games in college and the pros, died in 2010.

Last week, a separate panel picked Super Bowl V MVP Chuck Howley and All-Pro defenders Joe Klecko and Ken Riley as finalists in the seniors category. They also will get in if they get support from at least 80% of voters in January.

The selection committee could also vote in up to five modern era candidates from a pool still to be determined.

The Class of 2023 will be formally enshrined next summer in Canton, Ohio.