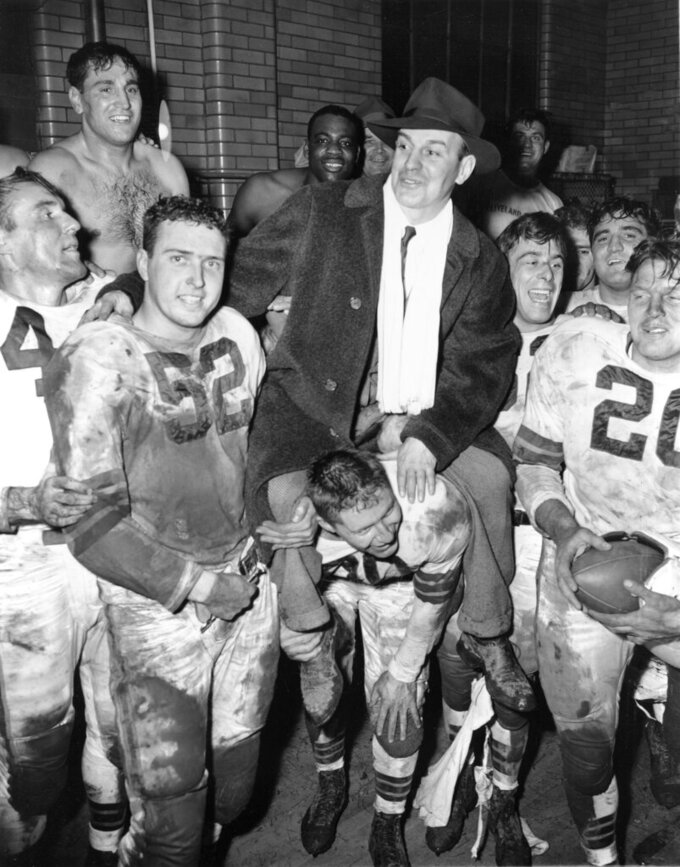 FILE - In this Dec. 11, 1949, file photo, The Cleveland Browns, All-America Football Conference champs, lift their coach, Paul Brown, onto their shoulders after defeating the San Francisco 49ers, 21-7, in Cleveland. Brown, the innovative coach and powerful team owner who brought dozens of improvements to the sport, has been voted pro football’s greatest game changer. (AP Photo/File)

Paul Brown's influence on professional football has been felt for decades. He is as responsible as anyone for making it America's most popular sport.

The innovative coach and powerful team owner has been voted the NFL's greatest game changer.

A nationwide panel of 57 media members selected the founder of the Cleveland Browns and Cincinnati Bengals, giving him eight first-place votes and 2,359 points. Brown beat out Pete Rozelle, widely considered the best commissioner in pro sports history, who earned 2,227 points despite having the most first-place votes (14).

Brown, inducted into the Pro Football Hall of Fame in 1967 — a year before the Bengals were born — is credited with bringing many now-common elements to the sport like game plans and playbooks; the use of game film in scouting; coaches or coordinators calling plays; a radio transmitter inside the quarterback's helmet for play-calling; and the helmet facemask.

With a successful background in high school, college and military service coaching, Brown was the first to hire a full-time coaching staff. He instituted a college scouting system that soon was copied by every other pro franchise. And ever the disciplinarian, Brown had his players stay in a hotel the night before a home game as well as before a road game.

"When you saw a Paul Brown team, it would be Paul Brown the creator," said running back Jim Brown, Paul Brown's greatest player. "There'd be something always new."

One thing that never got old with Brown was winning. His Browns — they were named for him by original team owner Mickey McBride — were champions of the All-American Football Conference in each of its four seasons. In 1950, the NFL accepted the Browns, Colts and 49ers into its ranks — the Los Angeles Dons merged with the LA Rams — in great part to get Brown into the more-established league.

After compiling a 47-4-3 record in the AAFC, where he also oversaw the breaking of the color barrier in 1946 with such African-American stars as Marion Motley and Bill Willis, Brown's team was considered an interloper in the NFL.

Brown was so far ahead of other NFL coaches, including the likes of George Halas and Curly Lambeau, that Cleveland went 10-2. The Browns even beat the defending NFL champion Eagles 35-10 in a "show us what you've got" season opener in Philadelphia. They won the league title in a 30-28 classic over the Rams.

Cleveland lost the next three league championships games before routing Detroit in 1954 and the Rams in 1955. In all, Brown went 111-44-5 as Browns boss before being fired by new team owner Art Modell after a 7-6-1 record in 1962. Brown had only one losing season in Cleveland.

Things were different in Cincinnati, where Brown had four winning records in eight seasons in charge of his expansion franchise in a city across Ohio from Cleveland. In head-to-head play with the Browns in those years, 1968-75, the Bengals went only 5-7, with each defeat deeply hurting Brown.

He stepped down as coach in '76 but continued contributing to the league on many important committees as the NFL grew and grew.

"I was a rookie, I got a chance to sit next to him on the bus on the way to a game," Bengals quarterback Boomer Esiason said: "He said to me, 'Boomer, don't ever forget the people who came before you and made football the game it is today.'"

"Whether they know it or not, nearly everyone in the game of football has been affected by Paul Brown," Rozelle said. "His wealth of ideas changed the game."

So did Rozelle's, and the NFL flourished under his leadership. Commissioner from 1960-89, Rozelle oversaw the league's popularity explosion that lifted it from behind baseball, college football and boxing to America's most profitable sport and followed sport. The NFL's availability on free television through national network contracts was established by Rozelle and remains intact. His marketing and public relations touch helped lead to such mega-brands as the Cowboys, Packers and Raiders.

"He had the unique ability to get people all on the same page in a business where you could depend on 28 different people all going in different directions," Chiefs owner and AFL founder Lamar Hunt once said.

Added Giants owner Wellington Mara: "I think Pete Rozelle will forever be the standard by which all sports commissioners will be judged."