Inspector in Kraft case says she saw evidence of trafficking 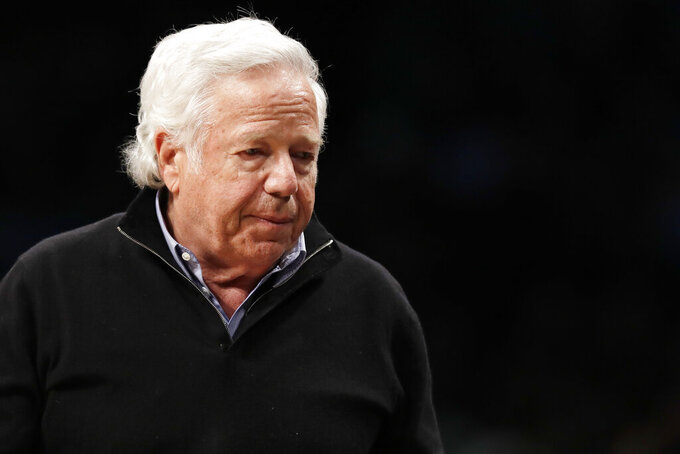 FILE - In this April 10, 2019, file photo, New England Patriots owner Robert Kraft leaves his seat during an NBA basketball game between the Brooklyn Nets and the Miami Heat, in New York. Attorneys for Kraft will be in court asking a judge to throw out a video that police say shows him paying for sex at a Florida massage parlor. (AP Photo/Kathy Willens, File)

WEST PALM BEACH, Fla. (AP) — A Florida health inspector testified Tuesday that she saw possible evidence of human trafficking at the massage parlor where police say New England Patriots owner Robert Kraft later was accused of paying for sex, leading her to fear for her safety.

Inspector Karen Herzog told a judge she saw clothing, beds, toiletries, large quantities of food and other items that led her to believe women were living in the Orchids of Asia Day Spa when she visited in November, which she said is a "red flag" that employees are being held against their will. Prosecutors have said they ultimately found no evidence of trafficking at the spa.

Herzog testified the manager appeared anxious and tried to hide evidence, and she feared she might be attacked. She said that is why she marked "not applicable" on the computerized inspection form where it asks if there is evidence of people living in the business.

Herzog said spa managers sign the report and know that a "yes" in the box indicating people are living there can result in a misdemeanor charge and their business being closed. That can cause them to lash out, she said.

"I was concerned for my safety," Herzog testified. "I just wanted to complete the inspection and get out."

Kraft's attorneys say Herzog was acting as a police agent and should have obtained a warrant before conducting the search. The lawyers want January video of Kraft allegedly paying for sex twice at the spa thrown out and they cite Herzog's inspection as one reason. Herzog said all massage parlors receive unannounced inspections annually and Orchids of Asia's was due. She said she inspects massage parlors several times a year at the request of police who suspect prostitution.

The defense is trying to convince Judge Leonard Hanser that Jupiter Detective Andrew Sharp illegally obtained a warrant to install video cameras and Kraft's constitutional right to privacy was violated. Kraft's attorneys have argued in court documents that statements by Palm Beach County State Attorney Dave Aronberg tying massage parlor prostitution to human trafficking were an effort to "spin a yarn about how their investigation had supposedly targeted high-level human trafficking rather than low-level prostitution."

Sharp resumed testifying Tuesday. Extrapolating on what he said Friday, the hearing's first day, he testified that his goal was to charge the spa's owners, manager and employees with deriving proceeds from prostitution, a felony.

He said he first needed to prove they were engaging in prostitution and didn't believe the testimony of customers after they left the spa would be enough. He also didn't want to send in an undercover officer because the detective would have to strip, putting him in danger, and then allow the woman to perform an illegal act. He said secretly installing cameras was the only realistic option.

"I needed to determine that the proceeds these women were getting was dirty money," he said.

The 77-year-old Kraft, who is worth $6 billion, and 24 other men were charged in February with misdemeanor solicitation for allegedly paying for sex there over a January weekend. The female owner and three employees are charged with felonies and misdemeanors. Kraft, who has not been in court, has pleaded not guilty but also publicly apologized for his behavior.

According to police records, Kraft was chauffeured to Orchids of Asia on Jan. 19, where officers secretly recorded him engaging in a sex act and handing over an undetermined amount of cash.

Investigators said Kraft returned 17 hours later and was again videotaped engaging in sex acts before paying with a $100 bill and another bill.

Hours later, Kraft was in Kansas City for the AFC Championship game, where his Patriots defeated the Chiefs. His team then won the Super Bowl in Atlanta, the Patriots' sixth NFL championship under his ownership.

Prosecutors offered to drop the charges if Kraft entered a diversion program for first-time offenders, as some others have. That would have included an admission he would be found guilty if the case went to trial, a $5,000 fine, 100 hours of community service and attendance in a class on the dangers of prostitution and its connection to human trafficking. It also would mean that, under Florida law, the video would be a public record.

That admission also would likely result in Kraft being punished by the National Football League.

The Orchids of Asia operation was part of a multicounty investigation of massage parlor prostitution and possible human trafficking that resulted with the arrests of about 300 men and the closure of 10 spas. No one in any county has been charged with human trafficking.