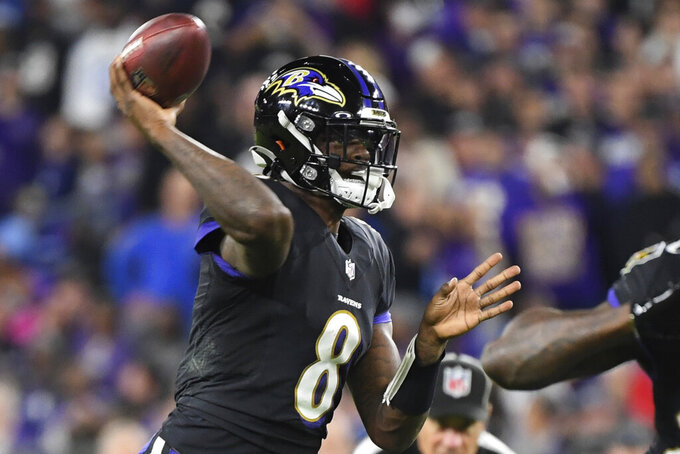 FILE - Baltimore Ravens quarterback Lamar Jackson (8) passes the ball during the second quarter of an NFL football game against the Indianapolis Colts, in Baltimore, Md., in this Monday, Oct. 11, 2021, file photo. The criticism of Lamar Jackson's passing ability should be awfully quiet right now after the Baltimore quarterback led the Ravens to another dramatic victory -- and threw for over 400 yards for the first time in his career. (AP Photo/Terrance Williams, File)

OWINGS MILLS, Md. (AP) — Colts owner Jim Irsay was so impressed with Lamar Jackson that he took to Twitter the next day — and said the Baltimore quarterback's performance against Indianapolis might have been the best in NFL history.

And Irsay, as he explained in his tweet, was at Wrigley Field the day Gale Sayers scored six touchdowns.

The superlatives keep rolling in for Jackson, who threw for 442 yards and four touchdowns in a 31-25 overtime win over Indianapolis on Monday night. It wasn't quite a perfect night for Jackson, who fumbled near the goal line, but after that turnover the Ravens scored touchdowns on their final four possessions.

The quarterback who has faced questions about his passing ability finished 37 of 43 in that department, leading Baltimore to a victory on a night when its running game wasn't up to its usual standard.

“Man, it’s special. He’s just scratching the surface on how good he can be," Ravens defensive lineman Calais Campbell said. “I think he’s still 24 years old. I mean, this is crazy — what he’s capable of doing. I know he’s notorious for what he can do with his legs, and I feel like he got a lot of disrespect on his arm talent, and I think a lot of people are eating their words right now.”

Jackson won MVP honors two seasons ago, and it's been clear for a while that his blend of passing and running can be really difficult to defend.

In truth, he's been pretty efficient throwing the ball throughout his career, completing 64.5% of his passes with 76 touchdowns and 21 interceptions.

Still, it was fair to point out that Jackson hasn't attempted more than 401 passes in a season — in a league where top quarterbacks routinely surpass 500. If you added Jackson's passing and rushing yardage, he accounted for 4,333 yards in his MVP season but just 3,762 last season.

The Ravens finished first in the NFL in rushing and last in passing in 2020 — and that added up to a No. 19 ranking in total offense.

“I don’t know if they’re going to stop talking about it. I don’t really know," Jackson said. "All I know is my focus is on winning.”

Whether by design or necessity — Baltimore's top two running backs went down with season-ending injuries — Jackson is throwing more, and he's handling it impressively. He's averaging 33 pass attempts per game, up from 25 last season.

“Look at the last couple of games, he’s just calm, composed, and he’s a leader, man," tight end Mark Andrews said. “That’s what we all look to. There were mistakes. There were a couple mistakes that were made, but he just keeps on coming.”

Jackson is also doing this without all the targets he was expecting to play with. Rookie receiver Rashod Bateman hasn't played yet because of groin problems, and newcomer Sammy Watkins left Monday's game with a hamstring injury.

Jackson ended up targeting Andrews and Marquise Brown a combined 23 times against the Colts. They caught 20 passes for 272 yards and all four Baltimore touchdowns.

Jackson's big game came on a night when the Ravens had their streak of 43 consecutive 100-yard rushing games snapped. After sputtering through the first half, Baltimore unleashed Jackson in the second. He threw for 335 yards after halftime.

“He definitely went to another level in that game. That level was pretty impressive I would say, and it was awesome to watch,” coach John Harbaugh said. “But I'm not surprised.”

This coming week, Jackson faces Justin Herbert and the Los Angeles Chargers in a matchup of division leaders. It's now clear that the Chargers — and the rest of Baltimore's opponents — need to respect the Ravens' previously maligned passing game.