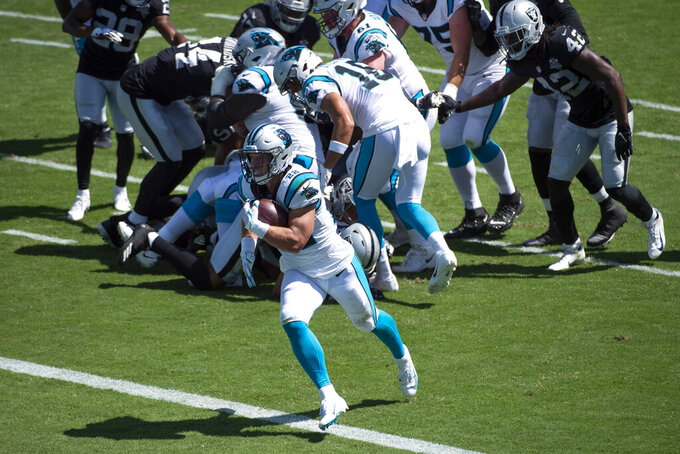 Carolina Panthers running back Christian McCaffrey scores against the Las Vegas Raiders during the first half of an NFL football game Sunday, Sept. 13, 2020, in Charlotte, N.C. (AP Photo/Mike McCarn)

Josh Jacobs followed his strong rookie season by running for 93 yards and three touchdowns, Derek Carr threw for 239 yards and a score, and the Las Vegas Raiders hung on to beat the Carolina Panthers 34-30 on Sunday to spoil Matt Rhule’s coaching debut.

It was the Raiders' first game since moving from Oakland to Las Vegas.

“That was a little bit like Walter Payton used to play,” Gruden said. “It was hot as hell. He got beat up early. He insisted on coming back and he insisted on getting the ball as a runner and receiver. He is special. He deserves some national attention — and I hope you give it to him.”

Jacobs’ 6-yard run around the right end with 4:14 left put the Raiders ahead for good after they’d surrendered a 12-point fourth quarter lead.

Jacobs laughed at being labeled special, and was more concerned about the yards he left on the field.

The Raiders scored on six of their first eight possessions against a young Carolina defense that started three rookies. But they needed a defensive stop to seal the victory.

Trailing 34-30, Panthers new offensive coordinator Joe Brady called a handoff to fullback Alex Armah — instead of All-Pro Christian McCaffrey — on fourth-and-inches at midfield, He was stopped at the line with 1:11 left. McCaffrey racked up 134 yards from scrimmage and scored two touchdowns.

Rhule took blame for the call the game,.

“It's a play we were all on board with,” McCaffrey said, referring to Armah picking up a first down on a similar play earlier.

After going three-and-out on their first drive, the Raiders scored on five straight possessions to take a 27-15 lead.

Carolina battled back, turning heavily to their star McCaffrey late in the third quarter. He got 11 touches and picked up 64 yards on one drive that culminated in his 3-yard TD run. Later, Teddy Bridgewater found Robby Anderson for a 75-yard strike on a blown coverage. Bridgewater went back to Anderson for the 2-point conversion to take a 30-27 lead. The free agent pickup from the Jets finished with six catches for 115 yards.

It didn't help that Carolina's No. 1 cornerback Donte Jackson (ankle) went down early in the first quarter.

Of course, the Raiders started two rookies of their own at wide receiver: Ruggs and Bryan Edwards combined for six catches and 64 yards.

“My mindset isn't that we have two rookie receivers," Carr said. "My mindset is we are equipped to accomplish what we want to accomplish. I am proud of our guys for coming back and winning that game.”

The only onlookers allowed into the stadium due to the coronavirus pandemic were about 40 staff and partners of the Panthers, who took in the game from some end-zone seats.

Birdgewater replaced Cam Newton as the franchise's starting QB and finished 22 of 34 for 270 yards and one touchdown in his Carolina debut. He said he was brought to tears during the playing of the Black national anthem “Lift Every Voice and Sing” in pregame warmups, thinking about his own journey back to being a full-time starting QB following a horrific knee injury in 2016.

“I was thinking about the process and the journey,” Bridgewater said. “I shed so many tears I had to run off the field early."

Among the other Carolina players who knelt for the anthem were Kawann Short, Anderson, Stephen Weatherly, Yetur Gross-Matos, Pride Jr., Bravvion Roy and Brian Burns. Linebacker Shaq Thompson was among those who raised his first.

Both teams stood earlier for the playing of “Lift Every Voice and Sing.”

Raiders: Lost both right tackles to injuries: Trent Brown (calf) in the first quarter and Sam Young (groin) in the third quarter. That forced the Raiders to move guard Denzelle Good to right tackle. Gruden called it a “championship effort” by a lot of guys, including Good.

Panthers: Jackson was replaced by Rasul Douglas, who was signed off waivers by Carolina last week. Cornerback remains a position of concern for Carolina.