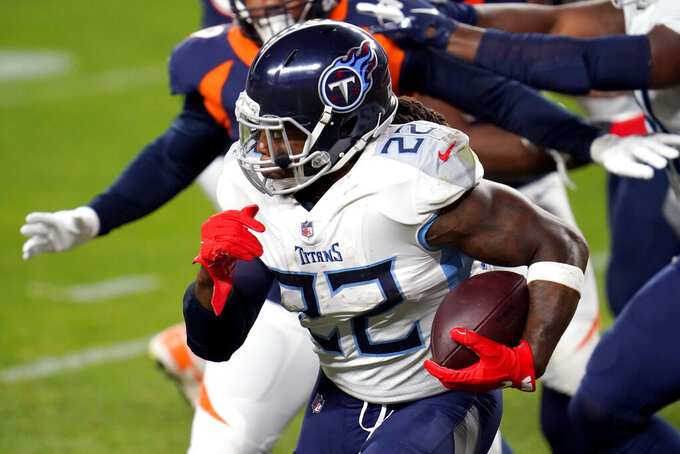 Tennessee Titans running back Derrick Henry (22) runs during the first half of an NFL football game against the Denver Broncos, Monday, Sept. 14, 2020, in Denver. (AP Photo/David Zalubowski)

JACKSONVILLE, Fla. (AP) — Jacksonville Jaguars coach Doug Marrone has a farm outside Nashville and dozens of friends and family members living in the area.

Many of them are Tennessee Titans fans, and they probably get excited when Marrone comes to town. After all, it usually means a victory is on the horizon for the hometown team.

The Jaguars have lost six straight in Tennessee, including all three since Marrone took over in 2017. The last two in the Music City skid have been lopsided affairs, essentially over before the fourth quarter began, with the Titans winning 30-9 in 2018 and 42-20 last season.

Marrone and his young team will try to end the trend Sunday.

“I just know at least we’re going up there and it’s not going to be cold,” Marrone quipped Wednesday.

After a promising opener in which the Jaguars rallied to beat Indianapolis, Marrone reminded his guys not to look back. Not to last week. Not to last season. And certainly not to the last time Jacksonville won at Nissan Stadium (2013) — only one of them would even know what he was talking about.

While Nashville might not be a “house of horrors” for Marrone and the Jags, it’s also not a place any of them can feel comfortable. Only three players on Jacksonville’s current roster have experienced NFL victories in Tennessee.

Cornerback D.J. Hayden won twice there with Oakland, in 2015 and 2016. Fullback Bruce Miller won there in 2013 with San Francisco. And defensive tackle Abry Jones was a rookie in 2013 when the 0-8 Jaguars shocked the Titans 29-27; Jones was inactive and on the sideline for Gus Bradley’s first victory as a head coach.

The Jaguars haven’t won in Nashville since — and haven’t been really close lately.

They couldn’t stop DeMarco Murray or Derrick Henry in prime time in 2016 and trailed 27-0 at halftime. Henry gashed them the last three years as well. He had a 66-yard touchdown reception in 2017, a four-touchdown performance that included a record-tying, 99-yard run in 2018, and a 74-yard scoring run last year.

The result? Jacksonville's second-longest road losing streak in franchise history; the Jags are 0-8 at New England.

“You always kind of get these streaks and things that people try to correlate things year after year. But I think in reality, every year’s a new year, every week’s a new week,” Jaguars quarterback Gardner Minshew said. “I think a lot of times these trends are more superficial than anything actually tangible.

“I think it’s a challenge that we’re looking forward to. We obviously don’t want any streaks like that.”

Tennessee insists it won't overlook Jacksonville, which has more losses in Nashville (16) than any other road venue.

“I don’t’ think one guy in this locker room is going to take anything for granted," Titans quarterback Ryan Tannehill said. "Obviously, their team has changed a lot since last year, and you look at the game tape how they played this past Sunday, that’s all we can really evaluate on this team.

“You can’t depend on last year. So I saw a team that plays extremely hard, plays disciplined and had no quit in them. They fought hard the whole game and that’s what we expect.”

The Jaguars are counting on it, too.

“I think you learn from the past and use the things that have happened to you," Minshew said. “But in reality, we have a ton of guys this year on this 53-man (roster) that have never played up there, have never been with us when we’ve gone to play. So, it’s a new experience, it’s a new team bringing up.”