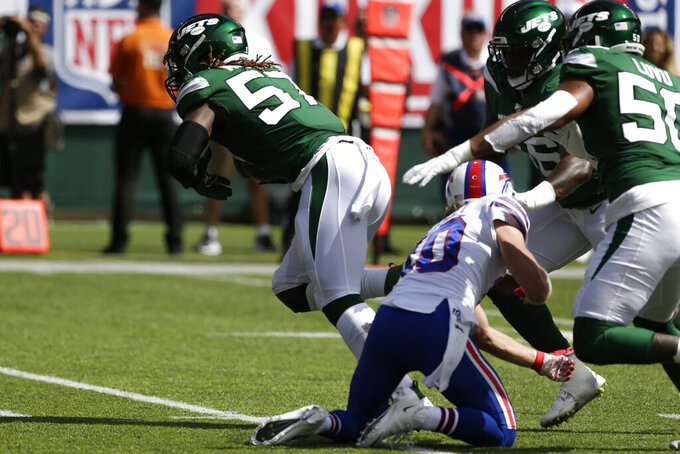 The Jacksonville Jaguars' hopes for stability at quarterback didn't even last one quarter.

Nick Foles broke his left collarbone when Chris Jones hit him hard and landed on top of him as Foles threw a 35-yard touchdown pass to DJ Chark in the Jaguars' 40-26 loss to the Kansas City Chiefs on Sunday. Foles will have surgery Monday. He is expected to be put on injured reserve, which would make him ineligible to play again until Week 11 at the earliest.

It was one of two significant shoulder injuries in Jacksonville. The Chiefs lost star receiver Tyreek Hill after he landed on his shoulder in the first half, and Hill was taken to a hospital after the game for treatment.

Foles' injury leaves rookie Gardner Minshew in line to start a big portion of Jacksonville's season. Minshew played well after relieving Foles, but he won't be the steady veteran presence the Jaguars were counting on.

Rookie linebacker Quincy Williams suffered a knee injury in the second half for Jacksonville.

Another big free agent signing, Jets linebacker C.J. Mosley, departed with a groin injury against the Bills, a key moment in Buffalo's rally to a 17-16 victory. The Jets also lost rookie defensive lineman Quinnen Williams, the No. 3 overall pick in the draft, with an ankle injury. Williams was in a walking boot after the game.

Browns quarterback Baker Mayfield had his right wrist X-rayed after Cleveland's season-opening 43-13 flop against Tennessee. The X-rays were negative and Mayfield, who left with his wrist heavily taped, said he would be "all right."

Browns backup left tackle Kendall Lamm, pressed into duty after starter Greg Robinson was ejected, was knocked out of the game with a knee injury. The Browns also lost running back Dontrell Hilliard to a concussion.

The only major concern for the Baltimore Ravens in a 59-10 laugher over the Dolphins was a knee injury to veteran cornerback Jimmy Smith in the first half. Smith will have an MRI. Miami receiver Albert Wilson suffered a calf injury.

The Washington Redskins lost two defensive linemen, Jonathan Allen (left knee) and Caleb Brantley (right ankle), in their loss to the Eagles. Philadelphia defensive tackle Malik Jackson limped off the field in the fourth quarter and wore a walking boot after the game.

Falcons wide receiver Russell Gage sustained a concussion on the final drive of Atlanta's loss to the Vikings. He was leveled by Minnesota's Harrison Smith and twice tried to get up and jog off the field, only to fall back to the turf. For the Vikings, nickel cornerback Mackensie Alexander injured an elbow.

Rams safety Eric Weddle suffered a head laceration in the second quarter of a victory over Carolina when he was kneed in the head by the Panthers' Christian McCaffrey.

In the Bengals' loss at Seattle, running back Joe Mixon left with an ankle injury in the third quarter. He had six carries for 10 yards. The Seahawks lost tight end Will Dissly to a right knee injury in the fourth quarter and special teams standout Neiko Thorpe in the first half with a hamstring injury.

Colts wide receiver Devin Funchess suffered a shoulder injury trying to catch a fade in the corner of the end zone late in regulation of Indianapolis' overtime loss to the Los Angeles Chargers. L.A. lost wide receiver Mike Williams to a knee injury.