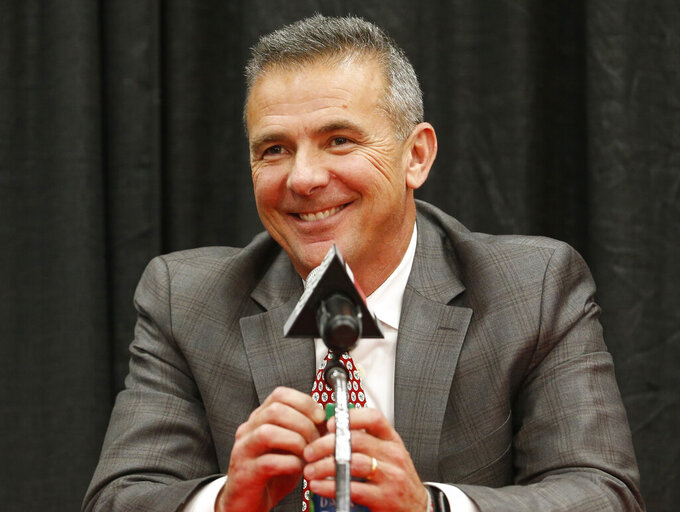 FILE - Then-Ohio State head coach Urban Meyer answers questions during a news conference in Columbus, Ohio, Tuesday, Dec. 4, 2018. Free agency feels a lot like recruiting to new Jaguars coach Urban Meyer. Watching film. Wooing players. Finding the right fits. Given Meyerâ€™s penchant for landing five-star prospects at Florida and Ohio State, Jacksonville could be a popular landing spot for some of the NFLâ€™s top free agents next week. It certainly should help that the Jaguars have more salary cap space (nearly $73 million) than any other team.(AP Photo/Jay LaPrete, File)

Urban Meyer never got a chance to recruit any free agents to Jacksonville, and he’s not happy about it.

Because of NFL rules, Meyer had to agree to sign players without meeting them in person — a process he found troubling and far different from how things work in college.

“That was awful,” Meyer said Friday. “I don’t believe it should be that way, not when you’re making organization decisions. I don’t know how that rule came about, but to me, that’s not good business.”

Meyer could have waited and tried to schedule interviews with free agents after the league’s “legal tampering” period, but by then many of the top guys would have been long gone.

So he had to step out of his comfort zone and woo guys with money instead his plan-to-win pitch that worked so well during college stops at Ohio State, Florida, Utah and Bowling Green.

Meyer ended up with a dozen new players, including four defensive linemen and two veteran receivers. He didn’t get any of the biggest names on the market even though Jacksonville had more money to spend (about $73 million) than any other team. The reason? The Jaguars had too many holes and too little talent to cherry pick a few high-priced players.

“In recruiting, we’d identify the best players and say, ‘Go get them,’” Meyer said. “And then all off a sudden I start finding out this guy cost $28 million dollars and this guy costs … Of course, I knew it.

“But just the way you put that puzzle together: Here’s your cap space, here’s your choices. ‘Can we take him or get three of these guys to help?’ I imagine once you build your roster exactly the way you want it, then you can take one guy and go get the $25 million athlete. We’re not in a position to do that right now. We’re just not.”

So Meyer and general manager Trent Baalke settled on being value shoppers, believing quantity was the most important approach given the team’s lack of talent and depth after finishing 1-15 last season.

Robertson-Harris had his 9-month-old son, Jax, in tow.

“Once Jacksonville called me, it’s like, well, shoot, it’s destined,” said Robertson-Harris, who chose the Jaguars over offers from Minnesota and Denver. “It ended up working out.”

Robertson-Harris and his wife, Krystal, had no idea they would end up in Jacksonville when they chose the name for their second son.

Griffin and Jenkins, meanwhile, needed no introduction. They grew up together in St. Petersburg and played on the same peewee football team, the Lakewood Junior Spartans. With two future NFL players, the team dominated and won three championships in six years.

“They couldn’t deal with us, man,” Jenkins said. “We had a few more athletes as well, but we were like the featured guys.”

They reunited in Jacksonville to help spearhead a defensive rebuild under new coordinator Joe Cullen.