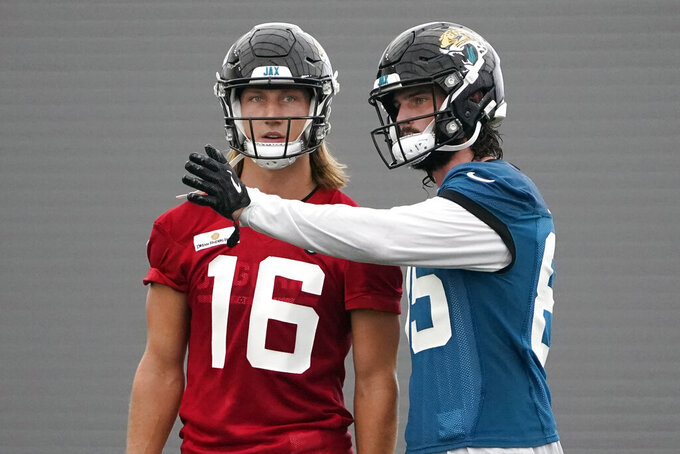 JACKSONVILLE, Fla. (AP) — Doug Pederson spent his first four months in Jacksonville trying to build trust with players. He was open and honest, working to help the Jaguars “heal” from one of the most toxic coaching tenures in NFL history.

Pederson’s latest move should help him curry even more favor.

The head coach canceled next week’s three-day, mandatory minicamp — at least for most of the team. No practices. No meetings. Not even a weightlifting session. Pederson essentially gave veterans an extra week of vacation before training camp next month.

He also nixed the last of 10 organized team activities, instead loading players and assistants onto buses and taking them to a nearby Topgolf facility for a few hours of frivolity. The Jags traded running in the sweltering summer sun for chilling in the shade and building bonds that could pay dividends down the road.

“They were thrilled,” Pederson said. “Listen, they worked extremely hard. We’ve had great attendance all spring. ... The guys are in good spots, so I felt that it was the right time to give them a little extra rest before we get ready to get cranked up in July.”

It’s become more common for NFL teams to scrap practices late in the offseason, but it's less prevalent among first-year coaches trying to install new schemes and figure out their personnel. Pederson had no such qualms, insisting veterans “earned” an early exit.

Jacksonville will still hold three abbreviated workouts next week for rookies, select vets and anyone recovering from an injury. Pederson estimated the sessions will have fewer than 30 players in attendance.

Everyone else hit the road Thursday, six days earlier than anticipated.

“That’s a bone as a player that you love,” said cornerbacks coach Deshea Townsend, who played 13 NFL seasons and won two Super Bowls with Pittsburgh. “That lets you know that the coach is looking out for you. When you have a coach that understands that you put in the work and gives you an opportunity like this, it makes you want to fight for him even more.”

Pederson took over Jacksonville in early February, tasked with trying to turn around a franchise that has lost 29 of its last 33 games. Repairing player-coach relationships was a priority, especially after Urban Meyer’s tenure lasted 11 months and 13 games and included way more breaches and failures than breakthroughs and fixes.

Meyer was seemingly in over his head, unable to connect with players and unwilling to adjust from his college ways. He insisted he spent a year studying the NFL, but he often didn’t know rules or key players on other teams.

Meyer’s mistakes are well documented. He was fired with cause in December, three days after a 20-0 loss at Tennessee and amid allegations he kicked a player months earlier. Kicker Josh Lambo has since sued the Jaguars, saying Meyer created a hostile work environment.

Pederson stepped into a messy situation and did what he could to repair relationships. Players welcomed Pederson’s approach, evidenced by not a single guy skipping voluntary workouts.

“I think it was a breath of fresh air, with the prior guy being a great college guy,” said defensive line coach Brentson Buckner, who played a dozen years in the league. “A lot of guys leave college wanting the NFL experience, but they get here and it’s a college experience again.

“In college, it’s pretty much the players play for the coach. In the NFL, the players and coaches work together.”

Jacksonville’s practices have a much different tone under Pederson than Meyer, who used loud music to set the tempo and an emcee to help shuttle players from one drill to the next. Pederson’s approach is more traditional and far less gimmicky.

“The one thing we’re here to do is to make sure we become a team,” Townsend said. “How do we become one and then play for each other on the field? The guys have done everything we asked.

“That’s what happens in the league. When you do what you’re supposed to do, good things happen. Hopefully it carries over for us during the season.”