Jags pick 1st again, but is this another slam dunk choice? 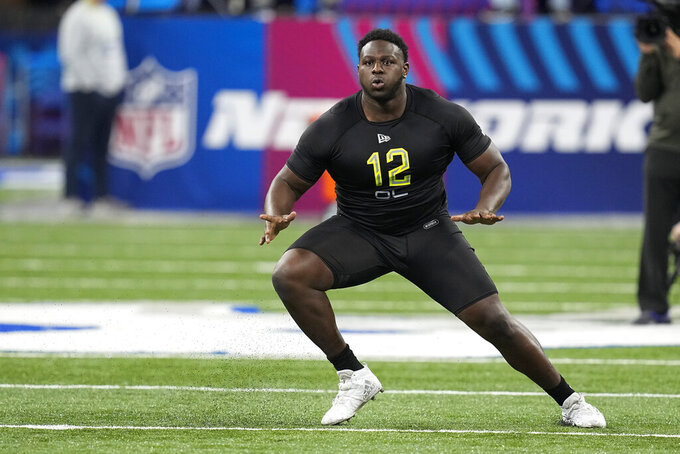 LAST SEASON: Urban Meyer’s much-ballyhooed leap to the NFL was a debacle, landing the Jaguars the No. 1 pick for the second straight year. The three-time national championship-winning coach at Florida and Ohio State didn’t know league rules, stars on other teams or seemingly how to effectively communicate with or properly lead his own players. He was fired with cause after 13 games in November, ending one of the worst coaching tenures in NFL history. He did leave behind quarterback Trevor Lawrence, the consensus No. 1 pick in last year’s draft, as well as plans (and now construction) for a stand-alone football facility that will get the Jaguars out of their stadium for the first time since the team's inception in 1994. Lawrence’s rookie year was far from impressive, however. The former Clemson star finished with 12 touchdown passes, 17 interceptions and plenty of room for improvement. Lawrence did look sharp in the regular-season finale, a 26-11 victory that kept AFC South rival Indianapolis out of the playoffs. Jacksonville hired former Philadelphia head coach Doug Pederson to replace Meyer, counting on his even-keeled approach and history of getting results from quarterbacks like Alex Smith, Donovan McNabb, Carson Wentz and Nick Foles to make the Jaguars more competitive immediately and ultimately a perennial playoff contender.

OUTLOOK: GM Trent Baalke gets a year without Meyer in the mix to continue shaping the roster. Baalke puts a premium on size – “I still believe it’s a big-man’s game, and I think that’s proven over time to hold true” – so choosing between Hutchinson, Walker and two massive blockers at No. 1 has to be an enticing spot for him. Hutchinson appears to be the safest option, which makes sense for a team short on talent, but Baalke could take a chance on Walker’s potential. The Jaguars have 12 picks in total, including four in the first three rounds. Getting immediate and productive starters with those top four selections could be key to getting Jacksonville out of the AFC South cellar and away from the top draft spot next year.