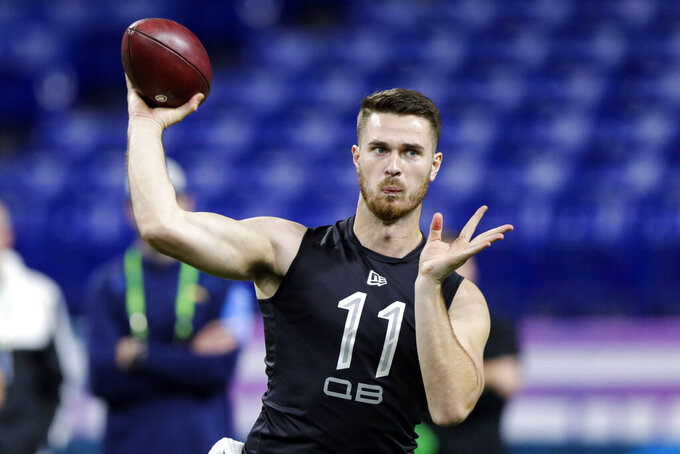 FILE - In this Feb. 27, 2020, file photo, Oregon State quarterback Jake Luton throws a pass at the NFL football scouting combine in Indianapolis. The Jaguars (1-6) believe Luton will make a smooth transition into the starting lineup despite not playing in nearly a year. He missed out on preseason games and was the team’s third-string quarterback for the first seven games, inactive behind starter Gardner Minshew and backup Mike Glennon. (AP Photo/Michael Conroy, File)

JACKSONVILLE, Fla. (AP) — Sitting at home with the Jacksonville Jaguars' playbook in hand and virtual meetings lined up regularly, rookie quarterback Jake Luton was looking for another way to practice.

The former Oregon State standout turned to those closest to him for help. He had two of his younger brothers and his girlfriend call plays for him to repeat in a simulated huddle. It didn’t exactly go as planned.

“They didn’t know how to spit it out the right way,” Luton recalled Wednesday.

So Luton grabbed his phone and tried something different. He recorded himself barking out every play in every imaginable scenario again and again until he felt like he had the playbook — along with his cadence and his delivery — down pat.

Now, after countless repetitions over the past six months, Luton expects to have an NFL voice to go along with prototypical size and arm strength when he makes his professional debut against Houston (1-6) on Sunday.

“If you can’t say the play call, there’s not going to be a lot of confidence flowing around,” Luton said. “So that’s kind of the first step and something that’s worked for me.”

The Jaguars (1-6) believe Luton will make a smooth transition into the starting lineup despite not playing in nearly a year. He missed out on preseason games and was the team’s third-string quarterback for the first seven games, inactive behind starter Gardner Minshew and backup Mike Glennon.

When tests revealed Minshew had a strained ligament and broken bones in the thumb on his throwing hand, coach Doug Marrone decided to give Luton a chance to end Jacksonville’s six-game losing streak against the Texans.

“He doesn’t act like a rookie, meaning he’s not a starry-eyed guy,” Marrone said. “The hardest thing I think for all of us, especially that position, is how is that player going to be when really the bullets are flying. ...

“Some guys are calm. You’ve seen them in the league. They’ve been successful. They’re calm. They step up. They can deliver the football. They keep their eyes down the field. Some guys get hit and they get rattled. We’ve all seen that. So that’s really what the unknown is.”

Luton is somewhat of an unknown. He was the 189th player and the ninth quarterback selected in the NFL Draft, mostly an afterthought, even for the QB-starved Jaguars.

But he caught offensive coordinator Jay Gruden’s eye in training camp, mostly because of his 6-foot-6 frame and his ability to make every throw in tight spaces.

“There’s a lot to like,” Gruden said. “He’s got a great arm. He’s got the ability to put touch on the ball. He can stroke it now, that’s for sure, so we’re excited to see him throw the ball down the field. I think he has great vision, too.

“He’ll be able to get off his first progression, be able to work his eyes and find the next, second, hopefully third guy, if we have protection. But from arm talent, he’s impressive.”

Still, the Jags plan to keep it simple for Luton while relying more on rookie running back James Robinson, who is averaging 4.5 yards per carry. Facing Houston star J.J. Watt and fellow pass rusher Whitney Mercilus provides more incentive to try to take some pressure off the slow-footed quarterback.

The opponents didn't matter to Luton, who is eager to take the next step in a winding path that started at Idaho in 2014. He spent two years with the Vandals before transferring to Ventura Community College, where he threw for 3,551 yards and 40 touchdowns.

He transferred to Oregon State in 2017 and started the first four games before a thoracic spine injury ended his season. He returned the following year, but he missed time because of a concussion and an ankle injury.

His breakout performance came as a sixth-year senior in 2019, when he finished with 28 touchdowns and just three interceptions in 11 starts. Even then, he missed his collegiate finale because of a forearm injury.

“Battled through some things and I’ve had my journey just like everyone else has, so it’s something I take pride in, the journey that I’ve had and the road it took to get here,” Luton said. “I’m just excited. I’m proud to be here and ready to get out there and play for the Jags.”

And he expects all that extra voice practice to pay off when he steps into the huddle.

“Playing the quarterback position, I think you have to be pretty even-keeled," Luton said. "I pride myself in just being composed at all times. That’s something the team really looks to and guys really respect. I just try to approach it day-in and day-out as a first-year guy coming in and preparing like I’m going to play ... so when my time comes, I’ll be ready.”