Jags trying to move on from 'negative stuff' against Titans 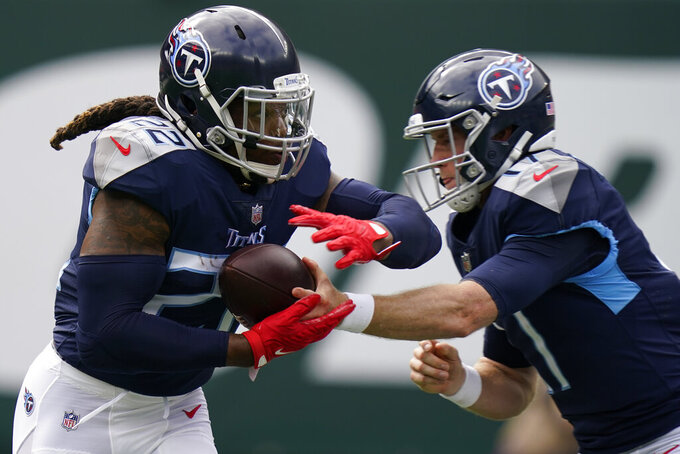 Tennessee Titans running back Derrick Henry (22) receives the ball from quarterback Ryan Tannehill, right, during the first half of an NFL football game against the New York Jets, Sunday, Oct. 3, 2021, in East Rutherford. (AP Photo/Seth Wenig)

JACKSONVILLE, Fla. (AP) — Urban Meyer got a slap on the wrist and then a pat on the back. He received support from players, coaches, family members and his boss during a tumultuous week that was as humbling as it was humiliating for the Jacksonville Jaguars coach.

His team’s performance against AFC South rival Tennessee might determine how smoothly – or possibly how far — that goes.

The winless Jaguars (0-4) return to action for the first time since Meyer’s “inexcusable” behavior in an Ohio bar when they host the Titans (2-2) on Sunday. Jacksonville has dropped a franchise-record 19 consecutive games, seven shy of tying the longest skid in NFL history.

One of the youngest teams in the league looked like it was making progress in recent weeks, culminating with a 24-21 loss at Cincinnati last Thursday. But the week since has been far from normal, even for a seemingly dysfunctional franchise that has been mostly a league laughingstock the past two decades.

The 57-year-old Meyer skipped the flight home and remained in Ohio to spend time with his family. He was captured on camera the following night with a young woman dancing between his legs while he sat on a barstool. The video went viral Saturday. A more damning one released Monday showed Meyer apparently touching her bottom.

Reactions ranged from no big deal to Meyer should be fired. Team owner Shad Khan publicly reprimanded Meyer for “inexcusable” conduct, saying the coach “must regain our trust and respect,” but he also expressed confidence Meyer “will deliver.”

A win against the Titans would be the best way for Meyer and the Jags to turn the page.

“This is not a distraction,” Jacksonville defensive end Jihad Ward said. “This is a bunch of negative stuff that we got going on. … I promise you we are 100% not worried about this. This is not making us feel bad. This is not we got our heads down. We are moving up. We’re aiming for the top. That’s all I care about and that’s all what the team cares about. This stuff ... if people laugh about it, we laugh about it. But we’re moving on.”

Facing the Titans might not be the easiest way to move on.

Tennessee has won three straight and seven of the last 10 in the series. Derrick Henry ran for 215 yards and two touchdowns in Jacksonville last December.

The defending division champs had a chance to be 3-1 after the first four weeks, but they lost in overtime last week at the New York Jets. They already provided one winless team its first victory of the season and surely don’t want to do it again.

Better protection for quarterback Ryan Tannehill would help. Tannehill has been sacked 17 times in four games, including 13 in Tennessee’s two losses.

“Obviously, it is going to be tough to win a football game when we are taking that kind of loss in the pass game,” Tannehill said. “As a group, we just have to do our jobs a little bit better and be able to create those plays.”

Ward welcomed a chance to explain what was going on in Jacksonville's locker room and made it clear that, as far as he was concerned, Meyer’s mishap would have no bearing on the game or the season.

“People laughing about it, people joking about it, that’s fine,” Ward said. “But at the end of the day, we got to move forward. We can’t worry about this stuff. Because if we lose this game, he is not to be the blame of this mess that we got going on. He’s not going to be the blame of it. And I won’t allow that to happen. So this is not a defend-my-head-coach situation. This is we’re not worried about this (stuff).”

Henry has a track record of running well against the Jaguars, the team closest to his hometown in Yulee, Florida. He has 1,013 yards rushing and 11 touchdowns against Jacksonville. He's currently the NFL’s leading rusher — he has 510 yards already — and he’s run for at least 150 yards in three straight road games. No one in NFL history has done that in four straight.