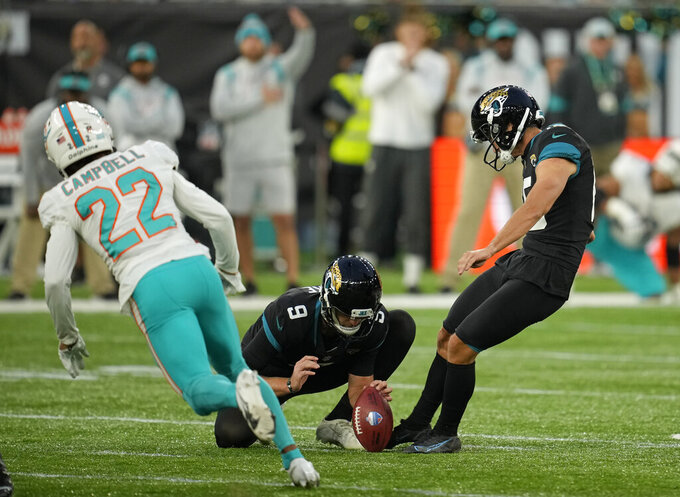 Jacksonville Jaguars kicker Matthew Wright (15), right, kicks a field goal to win the match during the second half of an NFL football game between the Miami Dolphins and the Jacksonville Jaguars at the Tottenham Hotspur stadium in London, England, Sunday, Oct. 17, 2021. (AP Photo/Matt Dunham)

JACKSONVILLE, Fla. (AP) — The Jacksonville Jaguars call it “Slider,” a somewhat fitting name for the play that helped end the NFL’s longest skid in more than four decades.

Coach Urban Meyer and offensive coordinator Darrell Bevell switched to the quick-hitting route after Miami called a timeout with 5 seconds remaining in a tie game Sunday in London.

The Jaguars had planned to have Trevor Lawrence throw a “Hail Mary” into the end zone on fourth-and-8 from the Miami 44 and hope for the best. But they realized the Dolphins were playing deep and decided to take a chance at picking up 8 yards quickly enough that they could call a timeout and still have a second remaining to attempt a winning field goal.

It worked to perfection.

Lawrence connected with Laviska Shenault on a sliding slant for 9 yards and quickly called the timeout. Unheralded kicker Matt Wright did the rest, drilling a 53-yard field goal on the final play for a 23-20 victory that ended Jacksonville’s 20-game losing streak 4,250 miles from home.

“Slider” is now part of Jaguars lore. That other slide, well, it won’t be forgotten anytime soon. But it’s over, which is what Jacksonville desperately wanted.

“Honestly, 5 seconds was really less than what we’ve needed,” Lawrence said. “It was a situation that really it’s hard to prepare for. But having all those reps in practice of that situation of getting the first, getting down, calling the timeout really paid off, and the guys were just ready and answered when we needed to.”

Lawrence and Meyer, two of college football’s most accomplished winners, notched their first NFL victories. Jacksonville (1-5) last won on Sept. 13, 2020, a span of 399 days. It was the longest losing streak since Tampa Bay dropped 26 in a row as an expansion team during the 1976-77 seasons.

“It’s a great feeling,” pass rusher Josh Allen said. “It’s been a long time for myself, for this organization, and we really needed this one.”

Added Meyer: “I really enjoyed that locker room after the game. I think I enjoyed that more than the actual game.”

The Jaguars finally found a kicker. Wright, who was working as a software engineer two months ago, made all three attempts at Tottenham Hotspur Stadium. He was at his best late, bending in a 54-yarder to tie the game with 3:40 remaining and then hitting the 53-yarder to win it.

“Obviously, Matt's earned the right to be the starting kicker,” Meyer said Monday.

Josh Lambo has been inactive the last three games while dealing with confidence issues, but he remains on the roster.

Jacksonville’s beleaguered defense came up big when Allen and fellow linebacker Chappelle Russell stopped running back Malcolm Brown for no gain on a fourth-and-1 play with 1:42 remaining, giving the ball back to Lawrence near midfield and setting up the winning drive.

Still, the defense gave up 431 yards and allowed the Dolphins to convert 9-of-17 chances on third downs. Jacksonville’s lack of pass rush and inability to cover opposing tight ends continue to pose problems.

Marvin Jones enjoyed his first 100-yard game with the Jaguars and showed great hands on a 28-yard touchdown pass from Lawrence late in the second quarter. It was Jones’ third TD grab of the season and the 54th of his 10-year NFL career. He finished with seven receptions for 100 yards.

Defensive tackle Taven Bryan, the 29th overall pick in the 2018 NFL draft, was inactive for the first time in his four-year career. It was another sign the Jaguars are ready to move on from the former Florida standout.

Jacksonville drafted Jay Tufele in the fourth round this past spring and were poised to give the rookie Bryan’s snaps in London. But Tufele broke his left hand during pregame warmups, did not play and might need surgery.

4 — number of NFL players to make multiple 50-yard field goals in the fourth quarter, including a winning kick on the final play. Minnesota's Greg Joseph and Jacksonville's Wright accomplished the feat in consecutive weeks.

Get healthy and end another skid. Jacksonville is 0-3 in Seattle, where it plays on Halloween. It’s part of the franchise’s West Coast woes. The Jags are 3-13 on the opposite coast, with all three wins coming in Oakland.