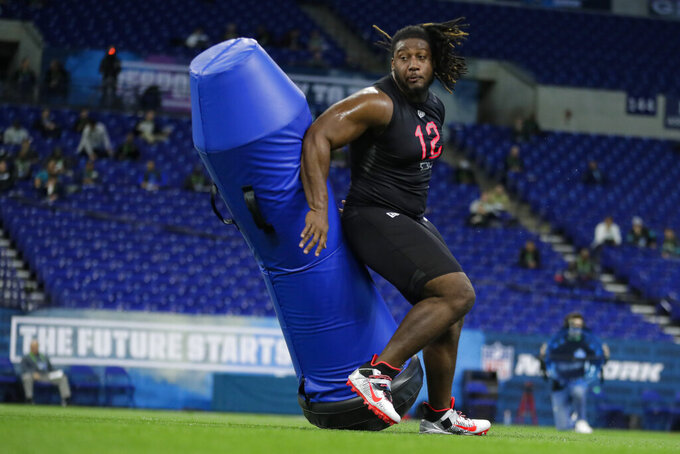 He believes he has Fitzgerald's business-like approach, Jones' do-everything ability and Landry’s on-field attitude. The Jacksonville Jaguars love his confidence and feel like it could serve him well at the next level.

Jacksonville gave quarterback Gardner Minshew another target by selecting Shenault in the second round of the NFL draft Friday. The Jaguars took Shenault with the 42nd overall choice in hopes that he will emerge as a passing threat opposite Pro Bowl receiver DJ Chark.

“If this kid would have been draft-eligible last year and come out, he probably would have been a top-10, top-15 pick," said Mark Ellenz, the team's director of college scouting. “In person, he looks like a linebacker. He’s really good with his RAC, his run after catch, not only with burst and explosive speed, but he’s a strong kid and can break tackles.

"He blends a lot of things together.”

Jacksonville added its third defender of the draft by selecting Ohio State nose tackle DaVon Hamilton in the third round, pick No. 73.

The 6-foot-4, 320-pound Hamilton waited for his chance to start as a senior and notched 28 tackles, including 10 1/2 for loss and six sacks in 14 starts in 2019. He will replace Marcell Dareus, whose contract option was not picked up last month. Jacksonville also signed journeyman Al Woods to a one-year deal in free agency.

Shenault also will face some competition for playing time.

The 6-foot-1, 227-pound Shenault had core muscle surgery following a lackluster performance in the NFL combine. But he could fit nicely in Jacksonville, which is moving to a west coast offense under new coordinator Jay Gruden and wants quicker passes intended to allow receivers to make plays after the catch.

Shenault led the Football Bowl Subdivision with 9.6 catches a game as a sophomore in 2018 and ranked fourth in the nation with 112.3 receiving yards a game. He caught 86 passes for 1,011 yards and six touchdowns that season for Colorado. He also scored on five of 17 carries, making him the only player in the country to have five rushing and receiving touchdowns.

He was slowed a bit last season, first playing through a shoulder injury and then the core injury.

“I can move around everywhere and do anything and dominate in different places and do what everyone loves," Shenault said.

Shenault wears dreadlocks to honor his late father. Laviska Shenault Sr. died in July 2009 from injuries suffered after being hit by a car on the side of a highway after he had exited his vehicle to switch from the passenger seat to the driver’s seat. His mother, Annie, survived West Nile Virus.

Shenault Jr. wrote a letter to NFL general managers that was published in The Players Tribune in which he promised to “represent your organization with the same pride and respect that represent the values taught to me by my late father.”

Character is becoming a trend in Jacksonville, which has struggled the last two years while dealing with a fractured locker room. First-round picks CJ Henderson and K’Lavon Chaisson are considered clean character guys.

“It's just another door opened," Shenault said. "It's another level, and there's more levels, too. I'm not stopping right now. I'm going to keep on leveling up.”

The Jaguars have three picks in the fourth round Saturday and eight more total.

General manager Dave Caldwell took a big swing in the opening round at rebuilding a defense that was considered one of the best in the league just a few years ago. He chose speedy Florida cornerback Henderson ninth overall and added versatile pass-rusher Chaisson at No. 20.