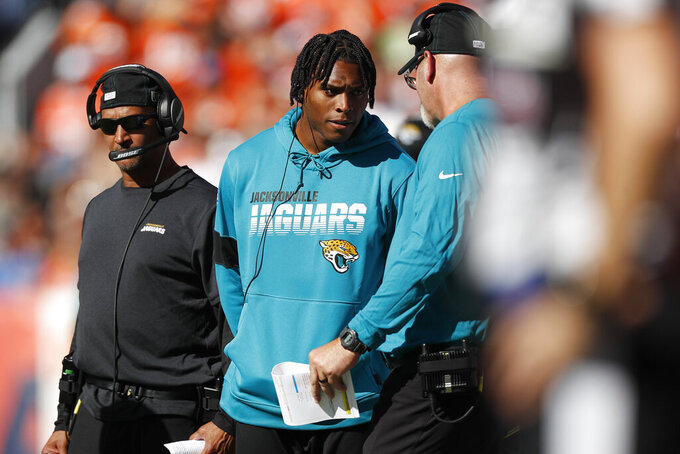 Jacksonville Jaguars cornerback Jalen Ramsey, center, talks with defensive coordinator Todd Wash as he stands on the sidelines during the first half of an NFL football game against the Denver Broncos, Sunday, Sept. 29, 2019, in Denver. (AP Photo/David Zalubowski)

JACKSONVILLE, Fla. (AP) — The Jacksonville Jaguars want to be a physical, smash-mouth team that has enough versatility to play other styles when needed.

Coach Doug Marrone has seen snippets of it on both sides of the ball.

He's still waiting to see it on a consistent basis.

The Jaguars (2-2) would no doubt like to repeat their offensive performance from Sunday's 26-24 victory at winless Denver. Leonard Fournette ran 29 times for a career-high 225 yards, and rookie Gardner Minshew II directed a game-winning drive in the final minutes.

But the defense got burned repeatedly by Joe Flacco and failed to get a much-needed stop in crunch time.

So it wasn't the identity Marrone wants from his team, but it was a step in the right direction.

"It's hard to come out and say we're a running team or we can stop the run and defend the pass, or we can get after the quarterback," Marrone said Monday. "You see a lot of glimpses of things in the past couple of games. In order to have an identity, you have to be consistent.

"Really, the one thing we've been consistent with is being resilient and being able to work and play together. Right now, that's the identity of this team and we'll keep working on the other factors at the end of the day."

The Jaguars have dealt with issue after issue this season, beginning with linebacker Telvin Smith abandoning the team in May. Since then, there was defensive end Yannick Ngakoue's holdout, quarterback Nick Foles' shoulder injury and cornerback Jalen Ramsey's trade request.

"It's a team that's been through a lot," Marrone said. "A team that showed some resiliency, that's really blocked a lot of things out and really focused on what we asked them to do, a team that's playing together. There's a confidence about the phases being able to contribute to help each other out. If one's down, the other one can step up. I think that's important."

It's also given Jacksonville consecutive wins for the first time in more than a year.

Minshew has given the Jags chances to win each of their last three games.

He struggled at times against Denver, but his 7-yard touchdown pass to Ryquell Armstead in the third quarter was close to magnificent. Minshew sidestepped three defenders before finding Armstead in the back of the end zone.

Minshew completed 19 of 33 passes for 213 yards and two TDs. He was sacked five times, but got to meet Peyton Manning afterward.

Jacksonville's defense has been hit and miss. The unit was stout against Houston and Tennessee, but was dismal in the opener against Kansas City and way too porous versus the Broncos.

Ramsey's return would help. But there's no guarantee the disgruntled defender, who's now dealing with apparent back tightness, will be healthy enough to practice this week or play at Carolina (2-2). Second-year pro Tre Herndon started in place of Ramsey and was picked on by Flacco.

Jacksonville's offensive line played its best game in two years. Marrone ripped the unit last week, and it responded with a dominant ground game in Denver. The group still has to cut down its penalties after getting flagged seven times against the Broncos.

Left tackle Cam Robinson was penalized three times — twice for false starts — and could have cost Jacksonville the game in the closing seconds for trying to fight with Denver defenders. CBS cameras later caught coaches separating Robinson and Fournette on the sideline after the game.

Safety Ronnie Harrison left the game with a leg injury but later returned and should be good to go this week.

51 — the number of consecutive games Ramsey started before being inactive for the first time in four seasons.