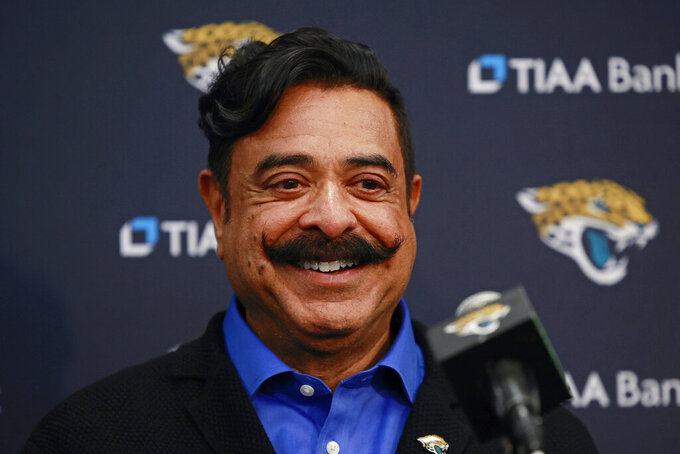 Jacksonville Jaguars owner Shad Khan smiles as he answers questions from the media during a press conference for Travon Walker, the Jacksonville Jaguars first round pick and No. 1 overall in the NFL football draft, Friday, April 29, 2022 at TIAA Bank Field in Jacksonville, Fla. (Corey Perrine/The Florida Times-Union via AP)

JACKSONVILLE, Fla. (AP) — Given Jacksonville's history at center, Luke Fortner should be prepared for a lengthy career with the Jaguars.

The Jags selected the three-year Kentucky starter with the first pick in the third round (No. 65 overall) of the NFL draft Friday night. He's expected to be a plug-and-play starter for a franchise that's essentially had just two players man the position for the better part of the last two decades.

Brad Meester was the team's starting center beginning in 2003, and Brandon Linder replaced him in 2014. Linder retired earlier this month after eight seasons.

“I do believe I have my own special abilities that I'll be able to bring,” Fortner said.

Fortner was the first and only offensive player Jacksonville drafted through the first three rounds. His selection came one night after the Jags filled two glaring defensive holes. They opened the draft Thursday by taking Georgia pass rusher Travon Walker with the No. 1 pick and later traded three selections — Nos. 33 (second round), 106 (fourth) and 180 (sixth) — to move back into the first round and grab Utah linebacker Devin Lloyd at No. 27.

Walker and Lloyd are considered immediate starters for a defense that allowed 353 yards and 27 points a game in 2021.

The Jaguars added another defender five spots after selecting Fortner when they chose Wyoming linebacker Chad Muma at No. 70. Muma was a tackling machine for the Cowboys, averaging 11.8 stops a game as a junior in 2020 and then 10.9 a game as a senior.

Muma is likely to start his pro career as a backup considering Jacksonville drafted Lloyd and signed Atlanta linebacker Foyesade Oluokun to a three-year $45 million contract in free agency that included $28 million guaranteed.

More offensive additions could be in store on the third and final day of the draft. Jacksonville has six picks remaining but none in the fourth round. General manager Trent Baalke and new coach Doug Pederson have a fifth-round pick, three sixths and two sevenths to continue their rebuild.

For now, Fortner is the lone draft help for quarterback Trevor Lawrence.

The 6-foot-4, 307-pound Fortner, who will turn 24 next month, started all 13 games at center last year for the Wildcats. He previously started 23 games at guard. He has masters degrees in mechanical engineering and business.

“Obviously we took him as a center and he'll play that position. But we'll move him around, too, and allow him to play some guard and let him get comfortable with the offensive line,” Pederson said.

They entered the draft with several holes, but have one less with Fortner's addition.