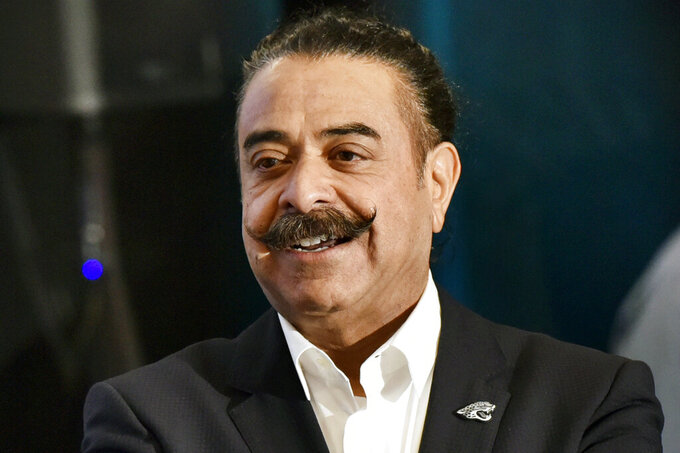 FILE - Jacksonville Jaguars owner Shad Khan speaks at EverBank Field in Jacksonville, Fla., in this March 8, 2017, file photo. It’s easy to see owner Shad Khan’s excitement and enthusiasm for the Jacksonville Jaguars these days. He’s laughing, cracking jokes, taking subtle shots at the previous coach/general manager regime. “It’s unbelievable,” Khan said Tuesday, April 27, 2021, two days before Jacksonville is set to select Clemson quarterback Trevor Lawrence with the first pick in the NFL draft. “If this isn’t a moment to enjoy for me and for all the Jags fans, you need more coffee or you need something else. This is a great-to-be-alive kind of moment, frankly.” (Will Dickey/The Florida Times-Union via AP, File)

It’s undoubtedly one of the best weeks of his 10-year tenure, right up there with playing in the AFC championship game in January 2018.

“It’s unbelievable,” Khan said Tuesday, two days before Jacksonville is set to select Clemson quarterback Trevor Lawrence with the first pick in the NFL draft. “If this isn’t a moment to enjoy for me and for all the Jags fans, you need more coffee or you need something else. This is a great-to-be-alive kind of moment, frankly.”

Khan is downright giddy knowing the Jaguars will land Lawrence, widely considered the best quarterback prospect since Andrew Luck in 2012. Khan was a wide-eyed NFL owner back then, with little more than a notion about how the league worked.

He’s since learned enough that he kept coach Doug Marrone and general manager Dave Caldwell in place an extra year in 2020 to have them clean up their mess. That decision, which came shortly after Khan fired top executive Tom Coughlin, was the moment he felt he was “ready to take the training wheels off.”

He hired Urban Meyer to replace them, bringing in one of the most decorated coaches in college football history and giving him full reign to change anything and everything he wants within the organization.

“Nine years ago, buying the team, it was like the great journey, the first step on a 1,000-mile journey and looking to the horizon,” Khan said. “And what it is now? We’ve been through ups and downs, mostly downs, and now you’re looking at a great upside.”

Although Khan declined to tip the obvious top pick, he didn’t balk at or even try to deflect any questions that mentioned Lawrence by name or alluded to him as the choice.

The Jaguars are counting on Lawrence solving a decades-old problem for the small-market franchise. Lawrence comes off a stellar college career at Clemson, going 34-2 as the starter and leading the Tigers to three Atlantic Coast Conference titles and the 2018 national championship.

He’s expected to be the face of Jacksonville’s franchise, along with Meyer, for the foreseeable future.

Khan sat in on several video calls involving prospective quarterbacks in recent weeks, including at least one with Lawrence. The owner, who plans to be more involved with decision making than during previous regimes, also has been on hand for a few mock drafts.

He insists this draft will be different from previous ones in Jacksonville that “still had surprises in the draft room.”

No one will be shocked when Jacksonville takes Lawrence, who will step into an immediate leadership role on a team still trying to make sense of all Meyer’s methodologies. Even Khan is learning more and more about them every day.

“The coaches have to have accountability if the players aren’t developing,” Khan said. “I think that sense of accountability is really kind of refreshing. You do that in normal walks of life. … We’ve always said, ‘Well, everything is about talent.’

“Well, if they don’t have the psyche to blend into the team, it’s not a good thing. And then if the coaches aren’t developing them, then we’re going to have what we have had.”