Jaguars opener will go down as worst in franchise history 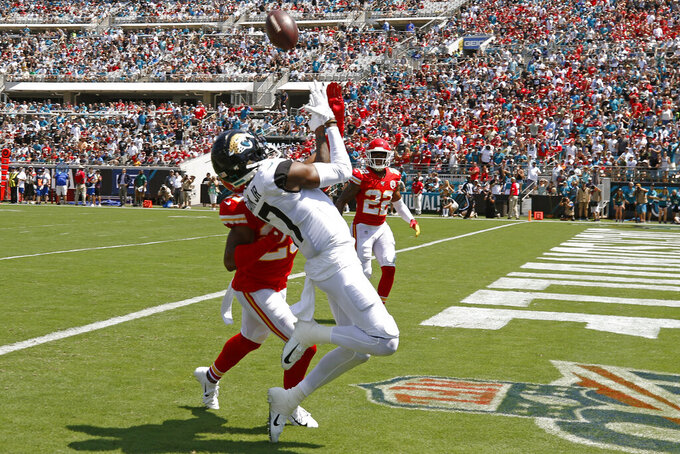 JACKSONVILLE, Fla. (AP) — Jacksonville's season opener will go down as the worst in franchise history.

The Jaguars lost quarterback Nick Foles for at least two months because of a broken left collarbone. Their vaunted defense deviated from what it does best — man-to-man coverage — and got gashed for 491 yards as well as eight scores in the first nine possessions. Linebacker and team captain Myles Jack, who recently signed a four-year, $57 million extension, was ejected for throwing a punch and then had to be restrained before he was escorted off the field.

Adding to the embarrassment of the 40-26 home loss to Kansas City : a small fire in a stadium fuse box caused a CBS production truck to lose power and forced the network to shift viewing audiences to different games for the final seven minutes.

Many of those inside TIAA Bank Field had already tuned out — for the day and maybe for the entirety of Jacksonville's now-seemingly ruined season.

"That's the game of football," Jaguars receiver Chris Conley said. "It's ebb and flow and unexpected. We've got to roll with the punches. We've got to get better and we've got to learn from some of the mistakes that we've made."

Foles tossed a 35-yard touchdown pass to DJ Chark before defensive lineman Chris Jones drove the quarterback to the ground, landed on him and broke his clavicle. And rookie Gardner Minshew threw for 275 yards and two scores off the bench. But both came in the fourth quarter, with the game out of reach, so it's hard to really gauge the performance of the former Washington State starter.

The defense was a debacle. Sure, the unit might deserve a pass considering it was facing the most potent offense in the league. But there's no excuse for tweaking the scheme and allowing Sammy Watkins to run mostly untouched for touchdowns of 68 and 49 yards.

Kansas City did anything it wanted, whenever it wanted.

"They are pretty damn good now," coach Doug Marrone said. "They've done that to a lot of football teams."

Chark caught four passes for a career-high 146 yards and a touchdown, showing the kind of big-play ability the Jaguars expected when they selected the LSU receiver in the second round of the 2018 draft.

"I feel like it's just the beginning," Chark said.

Right guard A.J. Cann, a fifth-year starter, had one of his worst games against the Chiefs. He was flagged for holding on the team's second drive and then beaten six snaps later, resulting in the hit that injured Foles. Cann signed a three-year, $15 million contract to stay in Jacksonville in March and now could end up on the bench once left tackle Cam Robinson (knee) returns, allowing Richardson to take Cann's starting spot.

"All I saw was two red jerseys in my face and I remember hitting the ground on the left side and feeling a crack," Foles said.

Foles and rookie linebacker Quincy Williams, who reinjured his surgically repaired right knee and felt swelling after the game. Williams had arthroscopic surgery in August to repair torn meniscus.

178 — the draft spot for Minshew, a sixth-rounder who takes over the starting job for the foreseeable future.

Foles had surgery Monday and was placed on injured reserve/designated for return. Jacksonville also acquired third-year quarterback Josh Dobbs from Pittsburgh to serve as Minshew's backup. Minshew will get all the first-team reps in practice as they prepare to play at Houston on Sunday.