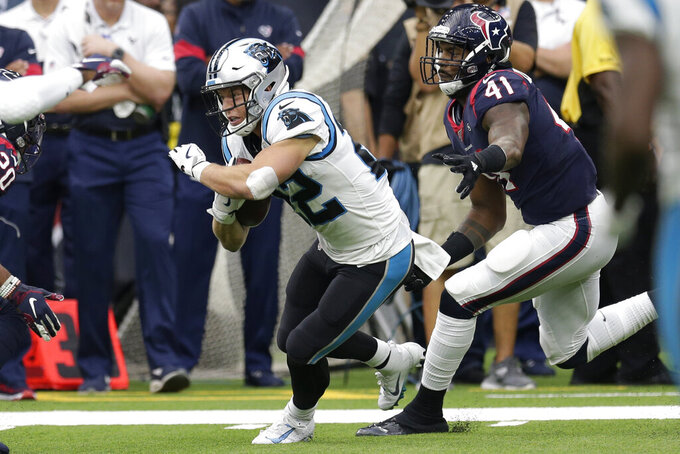 Carolina Panthers running back Christian McCaffrey (22) runs past Houston Texans inside linebacker Zach Cunningham (41) during the first half of an NFL football game Sunday, Sept. 29, 2019, in Houston. (AP Photo/Michael Wyke) 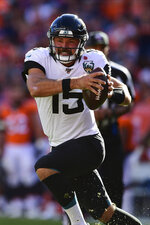 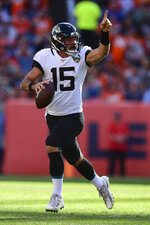 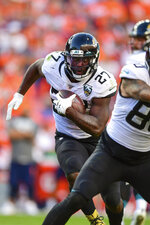 Two young backup quarterbacks with different looks but similar styles have taken over in Jacksonville and Carolina, energizing their teams with back-to-back victories after 0-2 starts.

On Sunday, Jacksonville’s Gardner Minshew and Carolina’s Kyle Allen will square off looking to extend those streaks.

Minshew, a sixth-round pick out of Washington State, has developed quite a following in Jacksonville since taking over in the season opener when Super Bowl 52 MVP Nick Foles went down with a broken left clavicle.

He has the highest QB rating (106.9) of any rookie in his first four games in the Super Bowl era while leading the Jaguars (2-2) into a tie for first place in the AFC South. He’s the NFL’s highest-rated QB in the red zone this season, too, completing 8 of 11 passes for 57 yards with five TD passes and no interceptions. Minshew is dealing with a sprained knee , but is expected to start Sunday.

Allen, who went undrafted in 2018, has rescued Carolina from two losses at home to start the season by beating Arizona and Houston on the road after Cam Newton decided to rest his injured foot. Allen is looking to become the first QB to win his first four career NFL starts _ he also won in Week 17 of last year _ since Kurt Warner, although he’ll need to do a better job with ball security moving forward.

The only major differences between the two young QBs may be appearance and popularity.

Minshew’s face is everywhere these days _ on billboards and T-shirts _ depicting his handlebar mustache. Teammates have even started wearing fake mustaches in the locker room.

“You can’t help but notice it,” Minshew said of the attention.

On the other side, the average-looking Allen is still gaining the trust of Carolina fans. He threw four TDs in the win over Arizona, but three fumbles last week against the Texans were some cause for concern.

Unlike Minshew, Allen said he can pretty much go anywhere without being recognized.

"I'm pretty unnoticeable,” Allen said with a smile. “I look like a lot like the rest of the people in this (media interview) room.”

But both are producing on the field.

Both QBs are getting plenty of support from their backs, with Carolina’s Christian McCaffrey leading the NFC in rushing and Jacksonville’s Leonard Fournette leading the AFC.

The Jaguars chose Fournette over McCaffrey in the 2017 draft, taking him fourth overall. The Panthers also liked Fournette but happily settled on McCaffrey at No. 8.

McCaffrey has thrust himself into the league MVP talk early on, leading the NFL in total yards from scrimmage with three games already of 175 yards or more. Fournette had a career-high 225 yards rushing last week against winless Denver.

Fournette, McCaffrey and Le'Veon Bell of the New York Jets are the only running backs in the league to play more than 90 percent of their team's offensive snaps this season. McCaffrey hasn’t missed a snap in three of Carolina’s four games. In fact, the only time he has taken plays off came in the latter stages of Carolina’s 38-20 win over Arizona in Week 3 with the Panthers up three scores.

On the flipside, Jaguars defensive end Yannick Ngakoue, who piled up 29 1/2 sacks during the first three years of his NFL career, doesn't have one this season. It's the longest stretch Ngakoue has gone without a sack since a four-game stretch in 2016. Ngakoue has been dealing with a hamstring injury, but insists that's not an issue. The former Maryland standout is entering the final year of his rookie contract.

He could have some success Sunday if the Panthers are forced to start sixth-round pick Dennis Daley at left tackle. Greg Little is out with his second concussion of the season, meaning the Panthers must decide between Daley and struggling veteran Daryl Williams at left tackle.

Both teams are getting great production from their kickers. Josh Lambo was AFC special teams player of the week, while Carolina’s Joey Slye won the award for the NFC. Lambo is a perfect 10 of 10 on field goal attempts, while Slye is 10 of 11 with an NFL-best four made field goals from 50 yards and beyond.