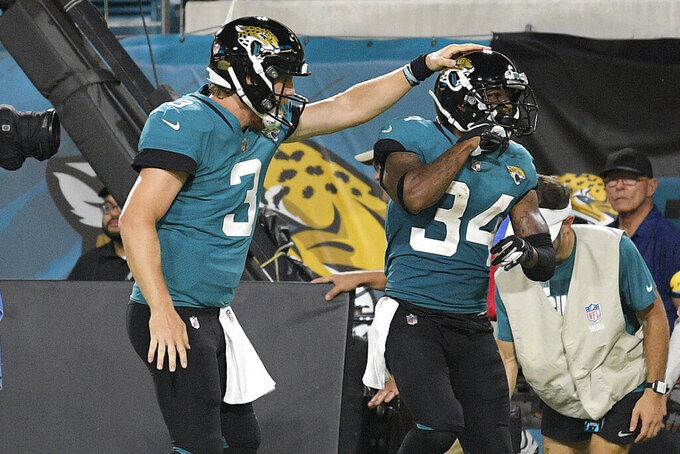 Jacksonville Jaguars quarterback C.J. Beathard (3) congratulates wide receiver Tavon Austin (34) after a reception for a touchdown against the Cleveland Browns during the second half of an NFL preseason football game Saturday, Aug. 14, 2021, in Jacksonville, Fla. (AP Photo/Phelan M. Ebenhack)

Austin injured his left quadriceps in practice last Friday and missed the team's preseason finale at Dallas. Since the 31-year-old journeyman made the 53-man roster before going on IR, he is eligible to return to practice after the first three weeks of the regular season.

Austin was one of Jacksonville's roster surprises. Despite signing in early August, he made the team over fellow former first-round picks Phillip Dorsett and Laquon Treadwell. Dorsett or Treadwell both landed on Jacksonville's practice squad, and one likely will replace Austin for the Sept. 12 season opener at Houston.

Austin was a potential replacement for rookie running back Travis Etienne, who had surgery Thursday for a Lisfranc injury to his left foot and is out for the season. Austin spent time with the St. Louis/Los Angeles Rams, Dallas, San Francisco and Green Bay prior to joining Jacksonville.