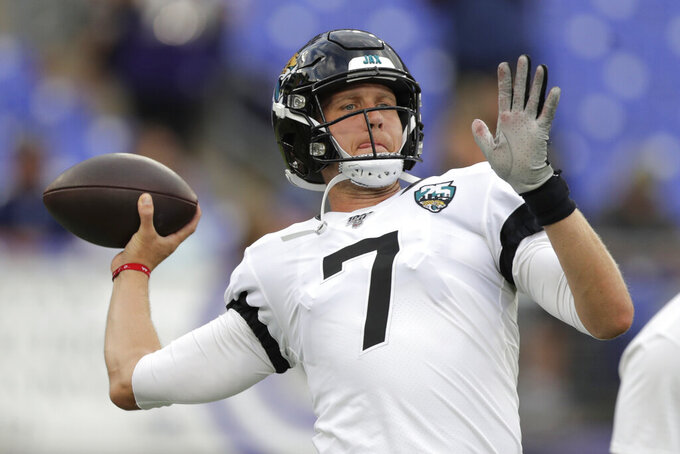 FILE - In this Thursday, Aug. 8, 2019 file photo, Jacksonville Jaguars quarterback Nick Foles works out prior to an NFL football preseason game against the Baltimore Ravens in Baltimore. The Jaguars believe signing the quarterback who was MVP of the 2018 Super Bowl is the key to fixing a team that finished last in the AFC South for the second time in three years, the last just months after playing in the AFC championship. (AP Photo/Julio Cortez, File)

Strengths: Defense is among best in league, with loads of talent up front and arguably NFL's top cornerback tandem. Calais Campbell, Yannick Ngakoue and rookie Josh Allen should provide plenty of pressure on opposing quarterbacks, while Marcell Dareus, Abry Jones and Taven Bryan clog up middle. Jalen Ramsey and A.J. Bouye are elite in coverage, but how good defense can be likely rests with rookie linebacker Quincy Williams and young safeties Ronnie Harrison and Jarrod Wilson.

Weaknesses: Offensive line was mess in 2018, with left tackle Cam Robinson, left guard Andrew Norwell and center Brandon Linder ending up on injured reserve and missing combined 26 games. All three are healthy now, but it remains to be seen whether they can stay on field, protect Foles and create enough space for bruising running back Leonard Fournette.

Fantasy Players To Watch: Fournette. It's make-or-break year for former LSU star. He ran for 1,040 yards and nine touchdowns as rookie in 2017 despite missing three games. But he slumped badly last year, finishing with 439 yards on ground and five scores. He was suspended for fighting, benched in crunch time and admittedly out of shape down stretch of schedule.

Expectations: Jaguars believe last year — they lost 10 of 12 to end season — was fluke caused by mounting injuries on offense and poor quarterback play. They insist it won't happen again and believe Foles replacing Bortles will be key to becoming more consistent on offense. It would be tough not to be better considering Jacksonville ranked 27th in yards and 31st in points in 2018.