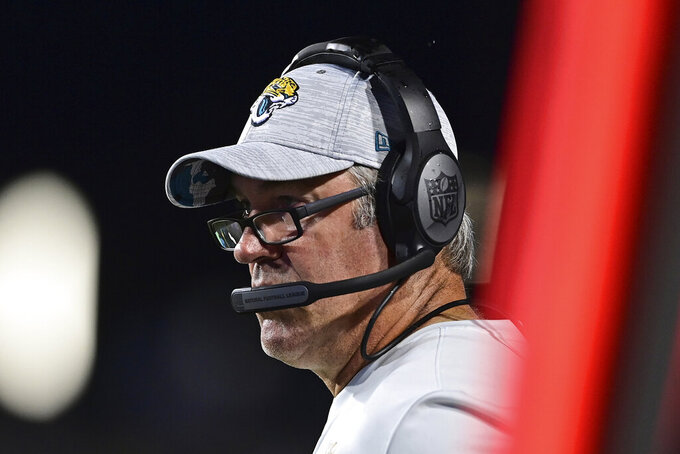 Jacksonville Jaguars coach Doug Pederson watches from the sideline during the first half of the team's NFL football exhibition Hall of Fame Game against the Las Vegas Raiders on Thursday, Aug. 4, 2022, in Canton, Ohio. (AP Photo/David Dermer)

JACKSONVILLE, Fla. (AP) — Coming off a career year and still well shy of his 30th birthday, Malcom Brown should be able to help an NFL team this season.

It just won't be Jacksonville.

The Jaguars released the veteran defensive tackle Wednesday, a move that will save the franchise $3 million in 2022. The decision had little to do with finances and more to do with others at the position. They signed journeyman linebacker Wyatt Ray to fill Brown's roster spot.

The 28-year-old Brown, the 32nd overall pick by New England in the 2015 draft, had fallen well behind starting nose tackle DaVon Hamilton, who's been one of the camp surprises, and had seemingly lost whatever edge he had on second-year backup Jay Tufele.

Jacksonville got an extended look at Tufele in Friday's preseason game against Cleveland, and the 2021 fourth-round pick finished with four tackles.

Brown was entering the final year of a two-year, $11 million deal with Jacksonville. He was scheduled to count $7.5 million against the salary cap this season. Instead, he will cost $4.5 million in dead money.

Moving on now gives Brown a chance to land elsewhere and possibly make a 53-man roster.

Brown started 17 games for Jacksonville in 2021, finishing with a career-high 57 tackles and two sacks. He spent four years with the Patriots before landing in New Orleans for two seasons (2019-20). The Jaguars traded a seventh-round pick in 2022 to the Saints for Brown in March 2021.

Brown's final practice in Jacksonville was one of the hottest and longest of the team's training camp and resulted in seven players leaving the field with heat-related issues.

All of them ended up in the “cool zone,” where team trainers and medical personnel worked to get them out of shoulder pads, in front of high-powered fans and feeling better out of Florida's sweltering summer heat and humidity.

“That's one of the hotter ones we've had,” quarterback Trevor Lawrence said. “That was a long one today.”

A potential cause of the heat issues: the Jaguars went a week between daytime practices. They practiced last Wednesday at the high school, had a walkthrough Thursday, a home exhibition Friday night against Cleveland, enjoyed two down days Saturday and Sunday and then practiced at night Monday before another day off.

Temperatures were closing in on 90 degrees near the end of practice Wednesday, with humidity around 80%.

“I thought I had it figured out until today,” tight end Evan Engram said.