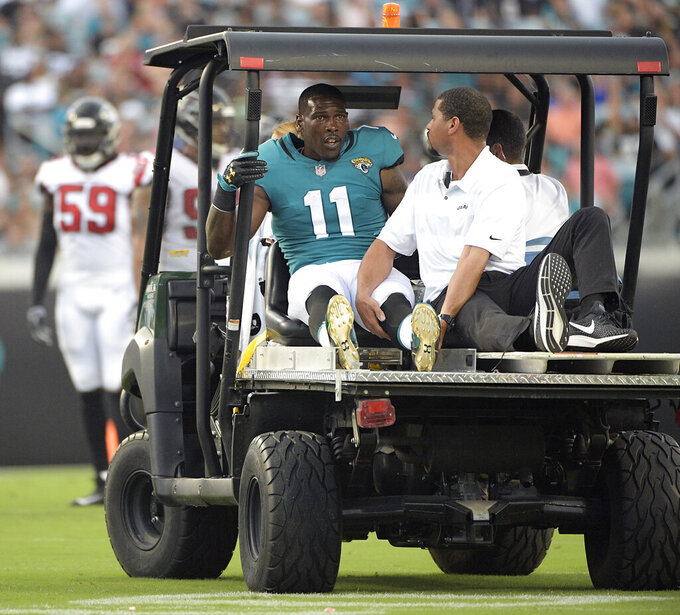 FILE - In this Aug. 25, 2018, file photo, Jacksonville Jaguars wide receiver Marqise Lee (11) leaves the field on a medical cart after he was injured during the first half of an NFL preseason football game in Jacksonville, Fla. The Jaguars waived oft-injured receiver Marqise Lee on Monday, April 20, 2020, to create nearly $5 million in salary cap space. (AP Photo/Phelan M. Ebenhack, File)

The move had been expected for weeks. The Jaguars were waiting for Lee to get fully healthy before letting him go, giving him the best chance to pass a physical with another team.

The 28-year-old Lee had been due to make $6.25 million this season and would have counted $8.75 million against Jacksonville’s salary cap. That’s a huge payout for a 28-year-old wideout who has three receptions for 18 yards the last two years combined.

Jacksonville with take on $3.5 million in dead money in 2020 by cutting him. The team also waived running back Taj McGowan.

Lee missed the entire 2018 season after tearing three ligaments in his left knee during a preseason game. He injured his shoulder last October and missed the final eight games.

He had become a role player by then, falling behind DJ Chark, Chris Conley and Dede Westbrook on the depth chart. Jacksonville likely will add a receiver in the NFL draft, especially with Conley, Westbrook and Keelan Cole entering the final year of their contracts.

Lee has 174 catches for 2,184 yards and eight touchdowns in six NFL seasons. He’s only played one full season (2016), missing time with a variety of injuries.

Nonetheless, the Jaguars re-signed him in 2018 and gave him a four-year, $34 million contract that included $16.5 million guaranteed. His base salaries the first two years were fully guaranteed.