Jake Butt says he was tempted to quit during latest comeback 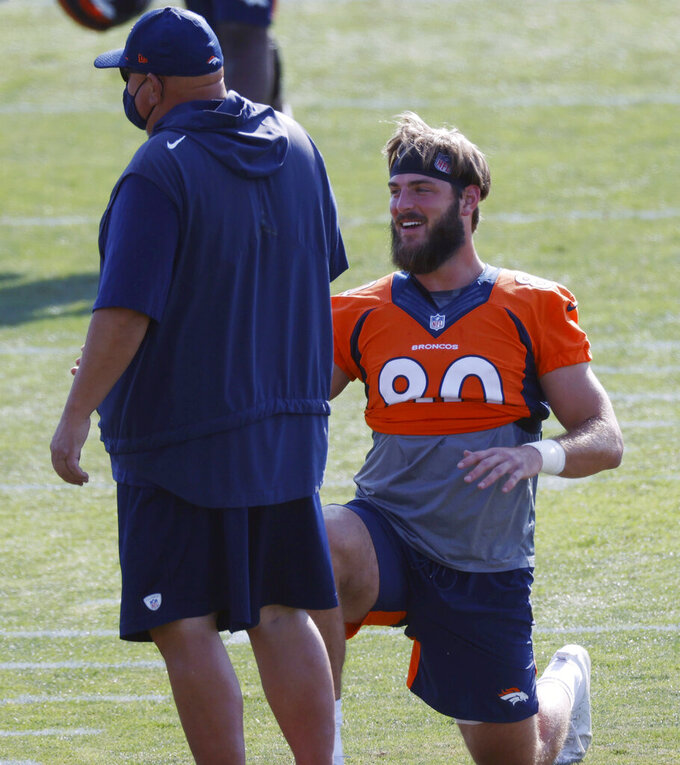 In three seasons with the Denver Broncos, the star-crossed tight end from Michigan has played in as many games (three) as he’s had major knee surgeries, each of which required a clean-up procedure.

So, that’s six operations to go with his eight career catches for 85 yards.

Just months after contemplating walking away from football, Butt has drawn high praise from his head coach and his quarterback this week with Drew Lock declaring, “There’s nobody in our locker room that doesn’t want to see Jake Butt succeed.”

Butt appreciates the sentiment but wants to put his health issues behind him.

“Man, it means a lot quite honestly,” Butt said Wednesday after another spectacular practice. “Guys have seen what I’ve been through and if you’ve been through an ACL you know how hard one is. When you go through three, it means a lot to get that recognition from your comrades, your teachers, your coaches. But for me, I’m healthy. It’s part of my story but I’m out there, I’m out there playing ball, I’m not looking back. I don’t have any excuses.”

Butt first tore an ACL during spring drills his sophomore season at Michigan and he tore the other one in his final game for the Wolverines, in the Orange Bowl. The Broncos drafted him three months later but he spent his rookie year on IR.

In 2018, he played in three games before suffering a third torn ACL, and last year his comeback was interrupted by yet another operation to clean out a torn meniscus. He hoped to return for the final month in 2019 but Lock got the activation nod instead after recovering from a thumb injury.

Butt has spent more of his pro career in the training room than he has on the football field.

“You’re still part of the team but you also feel miles away,” Butt said. “I would say honestly that’s probably the hardest part about rehab is it can get a little bit lonely and that’s where you start to build yourself up mentally. And throughout all three of my ACLs I think I’ve come out of the rehab more mentally tough than I was going into it.”

Yet, Butt acknowledged there were some dark days during his latest comeback that made him seriously contemplate walking away from football.

“There were a lot of days I really wanted to quit,” Butt said. “There was a lot of days I was really down on myself, questioning myself, questioning why I’m even doing this kind of thing? And for me it’s my support group, my teammates, my friends and maybe just a little bit of craziness that I’ve had implanted from my parents and my family growing up that you can’t quit and just show up tomorrow.

“I’m really happy I stuck with it because I do feel really, really good out there," Butt added. "I feel like I can still play in this league and I can contribute, I can even get much better than I am right now. So, I think that’s a lesson that I’ve definitely learned through this that everybody can learn is that bad days are going to come, tough days are going to come, but you can’t quit, you’ve just got to keep showing up.”

Notes: Four players were absent from practice Wednesday, including Fant, who was sick. Fangio made a point of saying, “not COVID sick, but normal sick, that’s what he’s got.” ... Also out were OLB Bradley Chubb (rest), CB Davonte Harris (bruised knee) and Vannett (concussion).

By Cliff Brunt an hour ago
By Juan A. Lozano an hour ago
5 hrs ago
By Arnie Stapleton 14 hrs ago
23 hrs ago