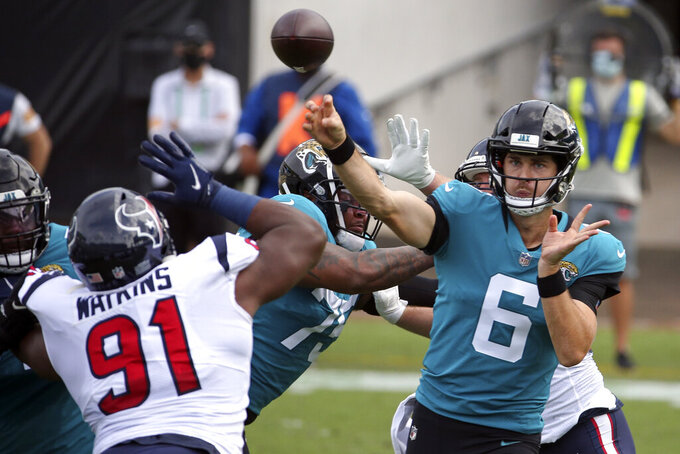 JACKSONVILLE, Fla. (AP) — Jake Luton’s first NFL start won’t be his last. The Jacksonville Jaguars don’t think it will be his best, either.

The sixth-round draft pick from Oregon State could end up supplanting Gardner Minshew (thumb) for the rest of the season. Coach Doug Marrone certainly liked what he saw from the rookie in a 27-25 loss to Houston on Sunday.

“I was impressed with a lot of things,” Marrone said. “I thought he made some really nice throws. I thought there’s some that obviously he’d like to have back. When it’s your first time starting and you’re down by a score and a 2-point conversion and lead your team down the field to potentially tie the game, I think that’s another checkmark.

“There’s a lot of checkmarks.”

Luton completed 26 of 38 passes for 304 yards, including a perfectly placed, 73-yard touchdown pass to DJ Chark on the game’s opening possession. He became the first rookie in franchise history to top 300 yards passing in his first start.

His strong arm was evident.

His athleticism was surprising.

Luton scrambled for 13 yards to make it a two-point game with 1:39 remaining. He stiff-armed rookie Jon Greenard and then spun away from Keion Crossen and into the end zone.

“I wouldn’t say it’s my strength, but it’s something I can do,” Luton said. “It’s not something I choose to do, but when the opportunity arises, I’m going to try to go out and make a play with my feet and was able to do that. It was fun. It was pretty cool to have that play.”

He took more pride in the stiff arm.

“The spin move, I didn’t really know what I doing,” Luton said. “I was trying to make something happen.”

His day wasn’t all good, though.

Luton threw an interception and had a fumble that a teammate recovered. But those were somewhat expected, especially considering he was playing against Texans star J.J. Watt, who notched his 100th career sack in Houston's sixth straight victory in the series.

Luton also had a chance to tie the game, but his 2-point conversion pass to Chark landed at the receiver’s feet in the end zone.

“It was just a bad ball,” Luton said. “Really no other excuse for it.”

Still, the Jaguars saw enough to think Luton has something they can build around.

“It’s just being comfortable and confident in himself,” said James Robinson, who ran 25 times for 99 yards and a score. “He showed everyone that he can do that, so I like it going forward.”

Added Chark, who finished with seven catches for a season-high 146 yards: “He stepped into a divisional game and he never showed any nerves. He just played football and did what was asked of him. He wasn’t afraid. He was fired up out there. He was excited. It’s good, definitely, for your first start in the NFL and not expecting it to come the way it did. Hats off to him for that.”

Luton had close to 30 friends and family members on hand for his debut. All of them traveled from Marysville, Washington, north of Seattle, to be at his first professional game.

“Every family member I have pretty much is here,” Luton said. “A couple of really good friends made the trip down, trying to surprise me, but I found out. A ton of support. I’ve got an awesome system that supports me. This just shows it.

“I’m as far away from home as I could be and they dropped everything at the drop of a hat to come support me.”

They will have a chance to see him against next week in Green Bay. Marrone said Minshew still is unable to throw, so “there’s no decision really to make right now.”