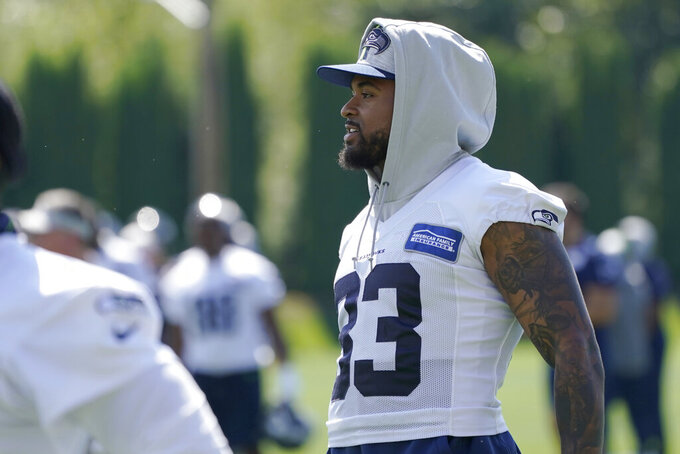 RENTON, Wash. (AP) — Jamal Adams walked out to the field about an hour into the first Seattle Seahawks practice of training camp in the role of spectator.

Coach Pete Carroll said that would have been the case for Adams even if there weren’t ongoing talks about a contract extension, citing a handful of offseason surgeries the standout safety needed to get healthy.

“He wouldn’t be working yet,” Carroll said after the first practice wrapped up Wednesday. “So it’s OK at this time right now. He’s out for the walkthroughs. He’s in the meetings and all that kind of stuff.”

While Carroll may be covering a little bit for Adams in the short term, the coach remained optimistic that the lingering contract situation could be resolved in the near future.

Adams is entering the final year of his rookie deal and ever since his trade from the New York Jets to Seattle a year ago, the Seahawks have known the time was coming when he would expect to get paid.

Adams did undergo offseason surgery on both hands and a shoulder. But if a deal gets finalized to secure his future, don’t be surprised to see Adams on the field soon after.

“The (contract) conversations have been ongoing for some time and been very amicable,” Carroll said. “He’s in a good place. They’ve worked really hard to this point. I’m very hopeful that it’s going to get taken care of here soon.”

Adams was one of a handful of Seahawks who were just watching Wednesday. Left tackle Duane Brown was also a spectator but Carroll said he took part in the team’s walkthrough earlier in the day. The 35-year-old Brown has indicated he wants a new contract as he gets set to begin his 15th season.

Rookie second-round pick D’Wayne Eskridge may take longer to take the field. He was placed on the physically unable to perform list due to a toe injury.

Carroll said the problem first emerged during the team’s offseason workouts in May and June but may have been something that bothered Eskridge in the past, just not to this level. Eskridge, a wide receiver from Western Michigan, could play a significant role as the No. 3 wide receiver option behind DK Metcalf and Tyler Lockett.

“We don’t want to rush it because it’s been kind of a nagging thing a little bit and so we’ll see what happens,” Carroll said. “We hold a really good thought that we can get him back out here in a week or two.”

The Seahawks went last season without a positive COVID-19 test and Carroll said there were no positives in the first two days after players reported to camp.

“The guys made an extraordinary effort to take care of one another in the statement they made. Particularly the guys who were uncertain about what to do, they made a decision based on their team as well as themselves and they wanted to do what was best for everybody and what will be safest for everyone,” Carroll said. “That’s a marvelous statement that our guys made.”

Carroll said he believes the league should be testing more often than is currently required given the increase in positive cases due to variants of the virus.

“I think the once every 14 days is not enough and we’re not going to do that. We’re not doing it. That’s not enough. We need to look after these guys,” Carroll said. “Really, it’s shifted. I mean that would have been fine two weeks ago, but things have shifted and we have to respond.”

NOTES: C Ethan Pocic is dealing with a sore hamstring and missed the first day. Carroll didn’t deem it serious, but it is providing extra time for Kyle Fuller with the starting offensive line. ... DE Aldon Smith participated after missing the offseason program following his arrest in Louisiana. Arraignment on his battery charge is scheduled for late August. Carroll did not comment on Smith’s legal situation.