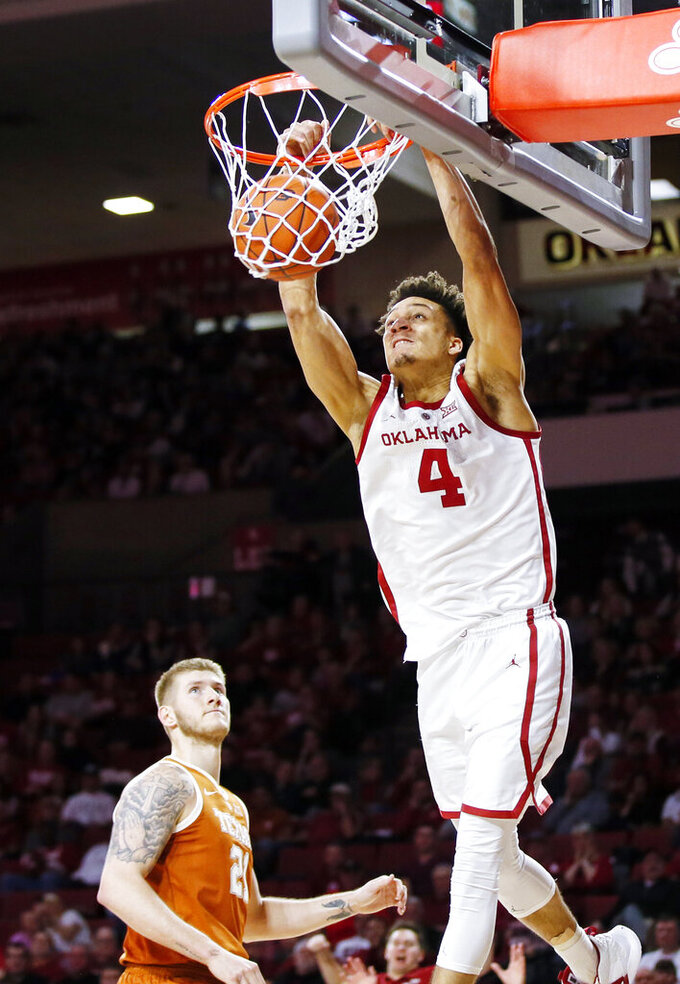 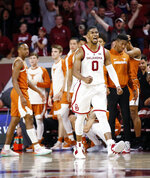 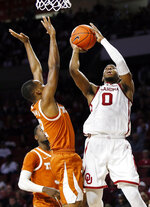 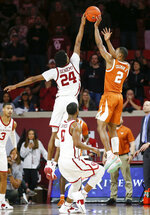 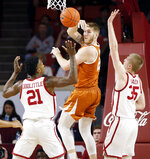 In Saturday's return matchup, Bieniemy was the hero.

The freshman point guard blocked Matt Coleman III's potential game-winner at the buzzer to give Oklahoma a 69-67 win over the Longhorns.

Coleman's chance to win came right after Oklahoma let an opportunity to put the game away slip by, as Kristian Doolittle missed the front half of a one-and-one and gave Texas one more chance.

Though Texas had a timeout remaining, coach Shaka Smart decided to put the game in the hands of his players, as Coleman got the ball immediately after the rebound and ran up the court.

Bieniemy picked him up just as Coleman crossed midcourt. When Coleman elevated over the 6-foot-4 Bieniemy at the 3-point line, Bieniemy reached his right hand up and knocked the ball away, sealing Oklahoma's second consecutive win and keeping alive the Sooners' NCAA Tournament hopes.

"Everyone works on that exact situation — late game, from the free-throw line," Sooners coach Lon Kruger said. "(Coleman)'s so fast and so quick and is such a good player. I thought Jamal battled him and made a big-time block."

Smart said looking back, he'd have called a timeout after Doolittle's miss.

"I felt like we could be able to get the ball up the floor faster than we did," Smart said.

In the first meeting between the teams, Bieniemy hit three 3-pointers in the final four minutes before missing one with 11 seconds left that helped Texas escape with the win.

As Texas (15-12, 7-7 Big 12) fights for its NCAA Tournament life, the Longhorns for now have to do it without leading scorer Kerwin Roach II.

Roach was suspended indefinitely Friday for a violation of team rules.

The senior guard was averaging 15 points, 4.5 rebounds and 3.1 assists.

Jase Febres started in Roach's place and hit five 3-pointers including two critical ones in the final three minutes but missed one in the final 10 seconds.

After Febres' missed 3-pointer in the final 10 seconds, Oklahoma defenders fought for several seconds for the rebound, eventually resulting in a shot-clock violation that gave the Sooners the ball back.

Texas was forced to foul on the inbounds, giving Oklahoma the chance to put the game away with two free throws, though Doolittle missed to give Texas one final chance.

Oklahoma: The Sooners' NCAA Tournament chances got a big boost with the win. Oklahoma's 12-1 nonconference record has kept the Sooners in the discussion despite a sub-.500 Big record.

The Sooners figure to need to beat West Virginia at home on March 2 and win at least one of their other three remaining games — at Iowa State and Kansas State and at home against Kansas — to have a chance to make the field, and two of those three to feel secure with their spot.

Texas: The Longhorns' lost for the second time in three games and their NCAA Tournament hopes took a hit in the process. Texas still has a solid chance to at least make the field, but Roach's indefinite suspension could have a lasting impact on their chances with tough games at Baylor and at home against Iowa State coming up.

Texas: Travels to Baylor on Wednesday. The Longhorns beat the Bears, 84-72, on Feb. 6 at home.

Late in the first half, former Oklahoma quarterback Kyler Murray was honored after winning the Heisman Trophy last season.

Murray, who recently walked away from a contract with baseball's Oakland A's to pursue an NFL career, said he hadn't decided if he would work out at next week's NFL Combine in Indianapolis.

Murray said he was content with his decision to choose football. Asked whether there was a chance he'd go back to baseball — the A's have reportedly kept the door open for Murray's return — Murray reiterated his decision.

"I mean, they can hold out all the hope they want to," Murray said. "I'm going to play football."