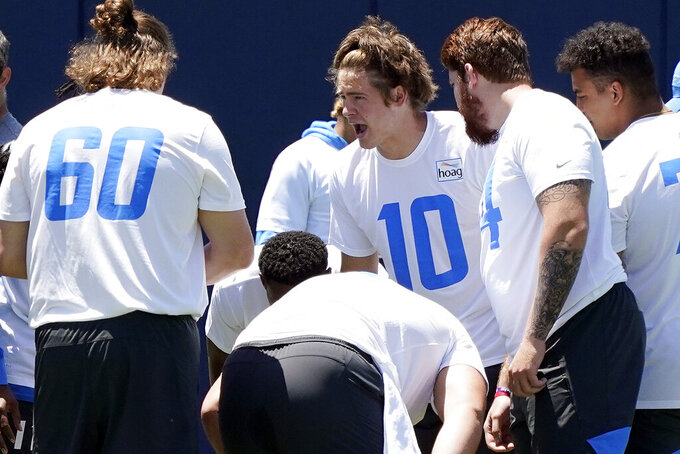 COSTA MESA, Calif. (AP) — Derwin James won't have to wait until the start of training camp to begin practicing with the Los Angeles Chargers.

The talented but often injured safety is taking part in on-field workouts as new coach Brandon Staley and his staff begin installing their defense.

James — who was cleared to return last Friday — was an All-Pro selection was a rookie in 2018, but has played in only five games the past two seasons. He missed the first 11 games in 2019 because of a stress fracture in his right foot and all of last season because of a torn meniscus in his right knee.

It was the second time in five seasons that James had to rehab from a meniscus tear, but he feels more confident working his way back this time.

“This time, I just feel a lot stronger and more stable, so I’m ready,” he said. “It was a relief to be finally, physically, all the way cleared medically. It just reminded me how much work and dedication it took to get back to this point.”

James has been around Staley from the time he was hired. He met Staley shortly before the coach's introductory news conference and has had a chance to get to know him better while rehabbing at the team facility.

Staley, defensive coordinator Renaldo Hill and secondary coach Derrick Ansley are already putting James to work by lining him up in a variety of spots. James has the versatility to play linebacker and line up close to the line of scrimmage.

There may be some cases though where James will line up deep, which is something he rarely did in former coordinator Gus Bradley's system.

Staley is also hoping that James and Nasir Adderley can work together at safety.

“They can see in the deep part of the field, the quarterback in their peripheral, as well as the formation and the routes as they express themselves,” Staley said. "Once they reach that comfort zone within the scheme, which they’ve already shown a pretty high comfort zone in a short amount of time, I feel like those guys will be a really nice tandem back there.”

James and the rest of the secondary won't be seeing a lot of intense competition during the next four weeks. Staley said the approach during the on-field workouts and next month's minicamp will be working at full speed during individual position drills, but that 11-on-11 work will be at a walkthrough pace.

Keeping players healthy during offseason workouts and training camp is the biggest goal for any team, but is paramount for a team such as the Chargers, who have suffered significant injuries the past two years.

James hasn't made it to the opener after his training camp injuries, which has resulted in the Chargers finishing with losing records the past two seasons. A healthy James was one of the main reasons why Los Angeles was 12-4 in 2018 and made it to the divisional round of the playoffs.

Offseason workouts have also been an issue for the NFL Players Association, as many players said they would not attend the voluntary workouts because of injury and coronavirus concerns.

“What we’re trying to do is create that same game-like mental intensity, ‘playing a game,’ but without doing so physically,” Staley said. "Our guys’ health is at the center of everything that we’re doing. Hopefully, we took a step in the right direction.”