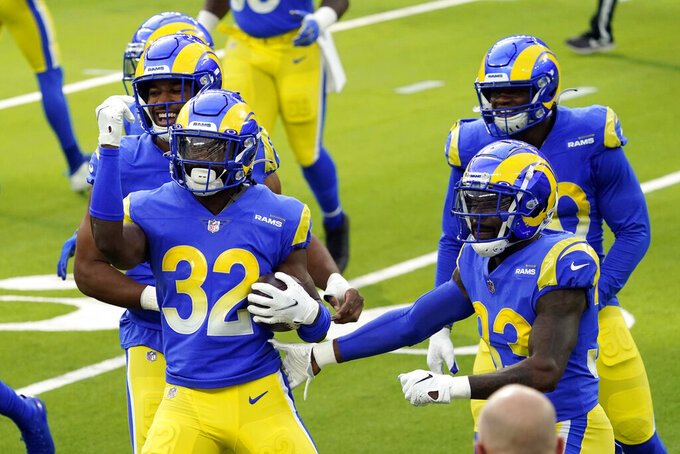 LOS ANGELES (AP) — Just when the Los Angeles Rams appeared to be solidifying into a Super Bowl contender, another loss to their toughest opponent exposed a major crack in their foundation that's been growing for a month.

Their quarterback has a turnover problem, and even his head coach is calling him out on it.

Jared Goff threw two ugly interceptions and lost a fumble Sunday in the Rams' 23-20 loss to the San Francisco 49ers. The fifth-year pro with the $134 million contract has thrown six picks and fumbled five times — losing four of those — in the Rams' past four games.

Sean McVay has become notorious for his strident refusal to assign blame for the Rams' failings to anyone but himself, even when those failings are obviously the fault of a player missing an assignment or not executing properly. But after Goff's struggles in LA's dispiriting first loss at SoFi Stadium, McVay surprisingly named the obvious reason for the Rams' turnover woes.

“Our quarterback has to take better care of the football," McVay said Sunday.

McVay didn’t back down from his strong words about his quarterback Monday, saying he spoke up for a reason.

“I wouldn’t say things if I didn’t know there was broad shoulders to be able to handle it,” McVay said. “I know we can all be honest about the expectations. I’m not going to apologize for the high expectations I have of him, and maybe while it was a little bit different approach (to talk about it publicly), I think it’s something that was honest, and that I know he’s capable of correcting.”

Goff committed only four turnovers in the Rams’ first seven games, but the only quarterback in the NFL with more turnovers than Goff’s 14 this season is Philadelphia’s Carson Wentz. While he's had long stretches of steady play in his four years as a starter, Goff also has committed 62 turnovers since 2017, more than any quarterback in the league except Jameis Winston.

Goff's turnovers only led directly to seven points against the 49ers when r ookie Javon Kinlaw returned his interception for a touchdown. But Goff's mistakes alter the entire offensive strategy of the Rams, who already aren't lighting up scoreboards as regularly as they did in 2017 and 2018.

McVay increasingly seems reluctant to call plays that rely on Goff to hang in the pocket and to make difficult decisions on downfield throws. Goff's rash of interceptions only encourages McVay to rely on short passes and screens — a weakness that every opponent's defensive coordinator can attack.

"They need to be eliminated,” Goff said of his turnovers. “That’s part of my job. I may be good at other parts of the job right now, but that’s the main part, and that’s something I need to be a lot better in.”

The Rams' defense is still dominant, and it covered for Goff's mistake with a touchdown of its own Sunday on Troy Hill's fumble return. But Los Angeles likely can't be taken seriously as an elite NFC team with an offense that has failed to score 30 points in six consecutive games — the Rams' longest stretch without hitting that mark in McVay's four seasons.

Los Angeles' defense continues to provide every opportunity to win. The Rams even improved on their mediocre defensive performance in their first loss to the 49ers, allowing just 348 yards and one offensive touchdown in the rematch. The defense was a couple of key stops away from winning mostly by itself.

The running game managed just 37 yards in the first half, and the Rams picked up nearly half of their 126 yards rushing for the afternoon on one 61-yard run by rookie Cam Akers. Without that sprint, Los Angeles averaged 2.4 yards per attempt.

Defensive end Morgan Fox made a solid impact with three tackles, a sack, a fumble recovery and a number of heady plays in just 30 snaps of action. The Rams' defensive line continued to look sharp overall, with San Francisco managing less than 3.5 yards per rush.

Turnovers aside, McVay is taking a beating from Kyle Shanahan, his San Francisco counterpart and fellow coaching golden boy since they were hired several weeks apart in early 2017. After McVay won three of their first four matchups, the 49ers boss has now won four straight in the friendly rivalry.

Jalen Ramsey only played 50 of the Rams' 72 snaps because he had “a hip thing” bothering him in warmups, McVay said. The $105 million cornerback hadn't missed a single snap in his previous nine games this season. ... Rookie LB Terrell Lewis is “week to week” with his troublesome knee injury after missing Sunday's game, McVay said.

9 — The number of touchbacks on new kicker Matt Gay's 10 kickoffs this season. That's a huge upgrade over previous kickers Samuel Sloman and Kai Forbath. Gay also made both of his field-goal attempts Sunday, and the Rams didn't miss a field goal or an extra point for only the second game all season.

A trip to Arizona for another division showdown with the Cardinals (6-5). LA has won six straight over the Cards, and another victory would guarantee four straight non-losing seasons for the Rams franchise for the first time since the Eric Dickerson era.