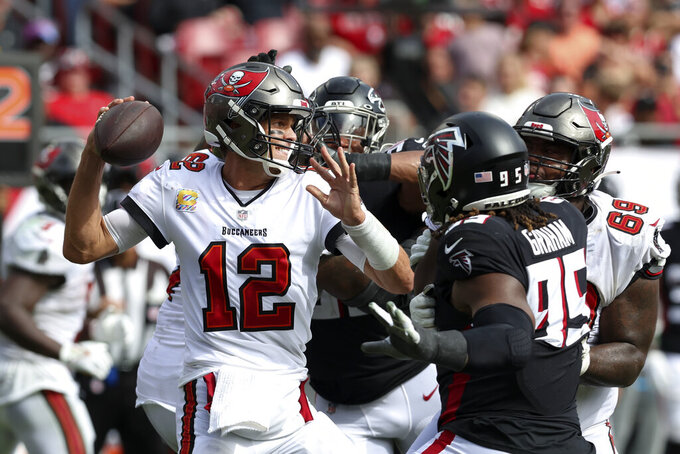 TAMPA, Fla. (AP) — Grady Jarrett and the Atlanta Falcons didn't want to touch the subject of whether NFL quarterbacks are being given extra protection in the wake of the concussion that sidelined Miami's Tua Tagovailoa.

Especially when the quarterback in question was Tom Brady.

Jarrett was flagged for roughing the passer after what many observed to be a typical sack late in the fourth quarter of Atlanta's 21-15 loss to the Tampa Bay Buccaneers on Sunday.

The 6-foot, 305-pound Jarrett wrapped up Brady from behind on third down and spun him to the ground — a tackle similar in style to the one that injured Tagovailoa, but not nearly as violent.

The Falcons were stunned when referee Jerome Boger threw his flag. Head coach Arthur Smith doubled over with his hands on his head.

“That was not roughing the passer,” tweeted Hall of Famer Shannon Sharpe, reflecting reactions from many around the sport.

“What I had was the defender grabbed the quarterback while he was still in the pocket, and unnecessarily throwing him to the ground,” Boger told a pool reporter after the game. “That is what I was making my decision based upon.”

Boger was also asked if the call was a specific measure ordered by the league in response to takedowns like the one that injured Tagovailoa.

“No, not necessarily,” he said.

Jarrett declined comment after the game, but his actions exposed his frustration. He slammed a garbage can and beverage cooler while repeating an expletive several times in the tunnel and hallway on the way to the locker room. He said he'd discuss the call on his Tuesday radio show.

Buccaneers coach Todd Bowles didn't think Brady, a seven-time Super Bowl champion, was getting special treatment on the play. But he thought the fallout from Tagovailoa's concussion — suffered amid a series of events that prompted changes this week to the league's concussion protocol — may have influenced the call.

“I saw that one being called. I saw it against Tua. I saw it in the London game this morning,” Bowles said. “I think they are starting to crack down on some of the things like slinging quarterbacks. Right now, the way they are calling it, I think a lot of people would have gotten that call.”

“League safety is at an all-time high, as it should be,” he added. “Anything close, which we understand going into the ball game, they’re going to call it.”

The Falcons saw it differently.

“From my vantage point it looked like it was a bad call, but that’s why you put the refs out there to make these calls,” defensive back Casey Hayward Jr. said. “They pay these guys to make those calls. It looked bad on my standpoint, but I was in the back end."

Smith said he was “not going to get into that.”

The 45-year-old Brady also stepped around the subject.