Jason Verrett not ready to compete for starting job in camp 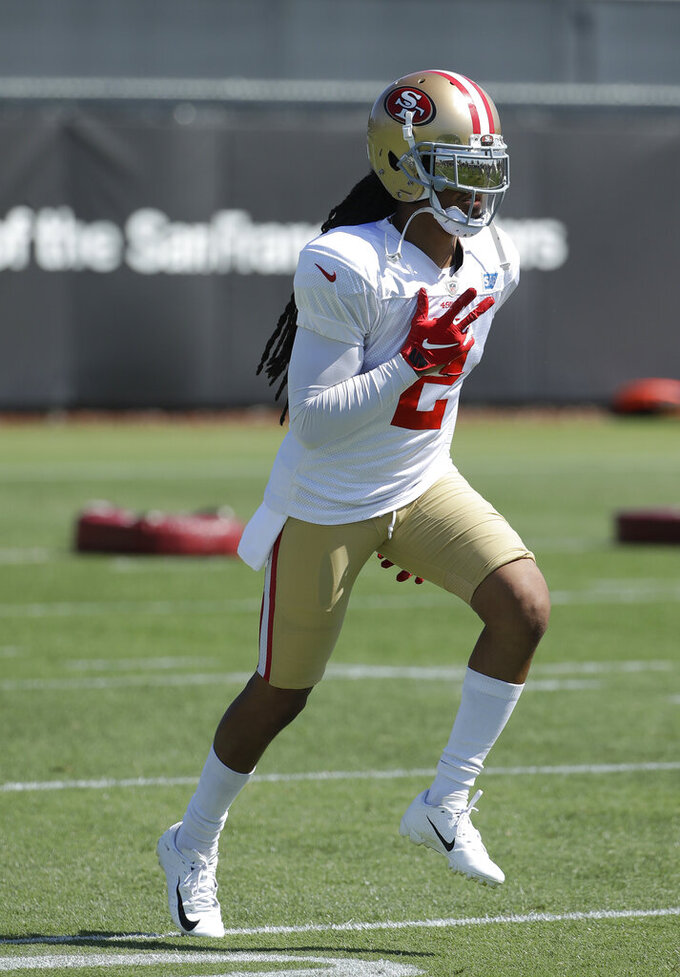 SANTA CLARA, Calif. (AP) — Jason Verrett has made strides during his recovery from an Achilles tear but he isn't ready to compete for a starting job at cornerback just yet.

The 49ers have placed Verrett on what they call a "pitch count," meaning they've limited his workload during the early portions of training camp. On Tuesday, Verrett played right cornerback with the second-string defense. When starter Ahkello Witherspoon tweaked his knee and left practice early, Verrett did not replace him — Greg Mabin did instead.

"We're managing (Verrett) to make sure he doesn't have to be an All-Pro player yet," defensive coordinator Robert Saleh said after practice. "Just continue to climb the ladder and get better every day. We will continue to increase his workload as (camp) goes on. Excited about where he's at, and he's only going to get better. He hasn't even scratched the surface of what he's capable of."

Verrett was a first-round draft pick in 2014 by the Chargers. He earned a trip to the Pro Bowl in 2015 when he broke up 12 passes and intercepted three in 14 games. But since that season he has missed 43 of 48 games. He had ACL surgery in 2016, another ACL surgery in 2017 and Achilles surgery in 2018. And while the Achilles injury occurred more than a year ago, Verrett still doesn't feel like his old self.

"I'm working toward that every day," Verrett said. "It's going to be a marathon getting my feet back under me, but I like the pace I'm at now. My Achilles feels good. It's just about physically being out there and gaining confidence."

Verrett made a confidence-boosting play during Tuesday's practice. Backup quarterback Nick Mullens handed the ball to backup running back Raheem Mostert, who cut his run to the outside and ran directly toward Verrett. Verrett stood his ground, lowered his shoulder and knocked Mostert on his back. After the play, Richard Sherman sprinted onto the field from the sideline to congratulate Verrett. "Get a little contact in, baby!" Sherman shouted.

Verrett also impressed starting strong safety Jaquiski Tartt. "He has been looking smooth," Tartt said. "He was thinking he was a little slow. I was like, 'What are you talking about?'"

Before signing a one-year, $3.6 million contract with the 49ers in the offseason, Verrett spent the offseason training at Proactive Sports Performance in Los Angeles along with 49ers middle linebacker Fred Warner. "Been chatting (Verrett) up ever since," said Warner, who knows Verrett a little better than the rest of his teammates. "He has already proven he can be dominant in this league. I'm looking forward to him getting more and more reps. He is starting to pop off the (video) tape a little bit out there with the limited reps he's getting."

Verrett said he hopes to play in the 49ers' preseason opener against the Dallas Cowboys on Aug. 10.

But Saleh indicated Verrett may not be ready for that game. The 49ers plan to take Verrett off his pitch count and let him practice fully when the team flies to Colorado for a week of joint practices with the Denver Broncos, before the two teams play each other Aug. 19.

"We're only in Day 4 (of training camp)," Saleh said. "You've got preseason games. You've got a big week (of joint practices) in Denver coming up. You've got your third preseason game, your fourth preseason game. So, there are a lot of days left to get all of that figured out. I anticipate over the next week or so that guys will start going full-go, and the picture will start to clear."