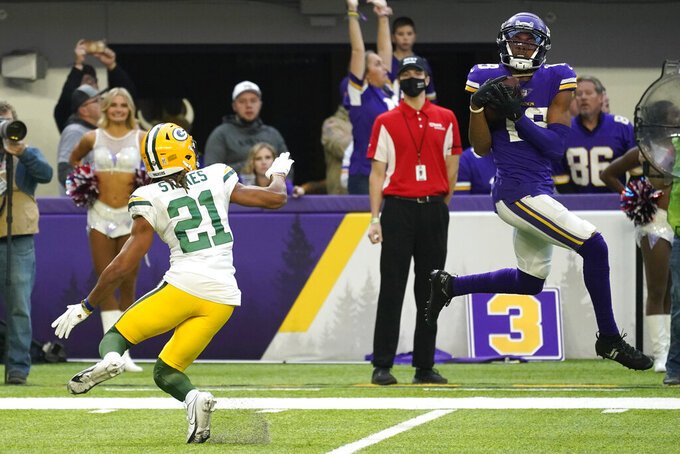 MINNEAPOLIS (AP) — Justin Jefferson strutted onto the field for pregame warmups wearing a black-and-purple T-shirt bearing the likeness of his Hall of Fame predecessor Randy Moss.

That was quite the bold statement by Minnesota's precocious wide receiver, particularly before the Vikings played rival Green Bay.

“Just trying to be a legend, trying to make big plays. Why not carry after him? He’s one of the best in the game. I just love playing the game, love the rivalry and love these intense big games,” Jefferson said.

His performance on Sunday afternoon was even more audacious: eight catches for 169 yards and two touchdowns in a 34-31 victory over the Packers.

“I heard him say the other day that he lives for games like this,” coach Mike Zimmer said.

The Vikings would be wise to let their lanky star continue to feast on those high stakes. With their record evened at 5-5 to take the lead in an especially large and unremarkable crowd of competitors for the NFC's final two wild-card spots, the Vikings have in Jefferson the type of game-breaking player who can mean the difference between making the playoffs and staying home.

“He’s very confident. I don’t think any of this stuff bothers him. He thinks he’s a great player, and he is a great player,” Zimmer said. “He really doesn’t have any prima donna in him as far as not working in practice or being late or anything like that. He just goes about his business. I think he just loves to go play and loves to practice, and I think he loves the limelight, too. I think he loves catching the ball and scoring touchdowns. Hopefully he can continue to do that.”

In the five games the Vikings have won, Jefferson has been targeted 54 times by Kirk Cousins and totaled 634 receiving yards. In their five losses? Just 35 targets. Only 310 yards.

“I’m sure he gets frustrated, we all get frustrated, but he never shows it. He’s just the same guy day in and day out," pass-catching sidekick Adam Thielen said. "He’s always got a smile on his face, is always having fun, but he also knows when to lock in.”

Vikings offensive coordinator Klint Kubiak has deftly moved Jefferson around the formations, including in the backfield multiple times against the Packers. One of his touchdowns came on an option route he turned into a skinny post after lining up behind Cousins at the snap.

“It just stresses your defense in a lot of different ways, and then it adds a layer to that when you can move him around,” Packers coach Matt LaFleur said.

In the past two games, both wins, Cousins has sent 54% of his passes toward either Jefferson or Thielen. In the two games before that, both losses, the target rate was 40%.

There's always an asterisk by the big numbers allowed by a defense when they were produced by Aaron Rodgers, but LaFleur and the three-time NFL MVP took full advantage of the Vikings' vulnerabilities while attempting to pass on 35 out of 54 plays.

Zimmer said the breakdowns in the second half, while the Packers scored touchdowns on all three possessions that averaged 85 yards apiece, were mostly his fault for calling the wrong coverages and rushes.

Cousins posted his 25th game with at least 300 passing yards and three touchdowns, passing Rodgers (24) for the second-most such games in NFL history in a player's first 10 seasons. Only Dan Marino (26) had more, and Cousins has seven more games to pass him.

Cousins is third in the league in passer rating (106.3) with 21 touchdowns and just two interceptions this year.

Defensive ends Everson Griffen and D.J. Wonnum combined for just one tackle. Backup defensive tackle Sheldon Richardson generated some solid pressure while taking some turns at end, but the Vikings need more of a rush from their front four.

The season-ending injuries to defensive end Danielle Hunter and tight end Irv Smith Jr. still sting, but the Vikings are much healthier than they were a week ago.

Safety Harrison Smith, linebacker Anthony Barr and cornerback Patrick Peterson all returned for the defense against the Packers. Garrett Bradbury was cleared to play after his COVID-19 recovery, but Mason Cole stayed in the lineup at center. Defensive tackle Michael Pierce will miss at least two more games with his elbow injury.

Facing another strong defense at San Francisco this Sunday, Cousins must continue to strike the balance being turning the ball loose to his stars Jefferson and Thielen without doing so carelessly. Cousins said in hindsight a half-dozen of his throws against Green Bay were probably "too aggressive," an assessment by the meticulous quarterback that might have raised some red flags with the coaching staff.

“I want him to keep doing it like he’s doing it. He can’t second-guess himself. If he throws an interception, that’s life," Zimmer said. "But you keep going for the jugular, it’s going to open up a lot of other areas in the running game. It’s going to open up other players. We’ve just got to keep being that way.”