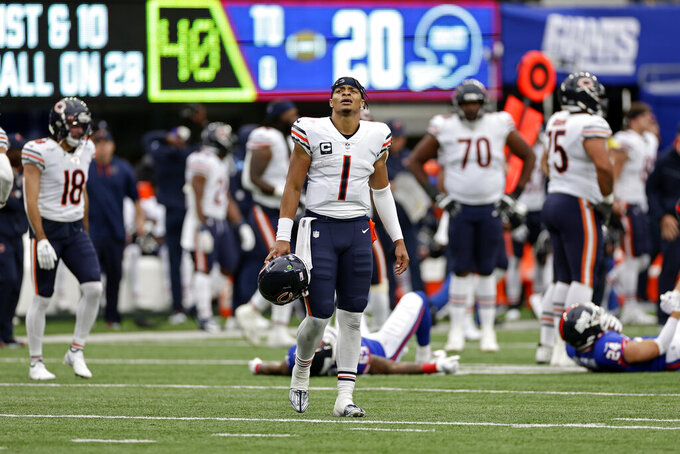 OPENING LINE: Vikings by 7, according to FanDuel SportsBook.

TURNOVER DIFFERENTIAL: Bears even; Vikings plus-1.

VIKINGS PLAYER TO WATCH: OLB Danielle Hunter. The Bears have allowed a sack on nearly one-quarter of their pass attempts. Hunter has just one sack in four games.

KEY INJURIES: Bears RB David Montgomery (ankle) and CB Jaylon Johnson (quadriceps) were both held out of the previous game and did not practice on Wednesday. LG Cody Whitehair (knee) went on injured reserve this week. ... Vikings OLB Za'Darius Smith (knee) was limited to 24 of 60 snaps against the Saints. He practiced on a limited basis on Wednesday.

SERIES NOTES: This is the first time in 16 years that the Bears have played at Minnesota before Thanksgiving weekend. Six of the past eight matchups in Minneapolis were the regular-season finale. ... After losing his first three starts with the Vikings against the Bears, QB Kirk Cousins has won three of his past four. ... Fields passed for 285 yards at Minnesota last year, his second-highest total in 14 career starts. He went 26 for 39, both career highs.

STATS AND STUFF: Fields has 34 completions, by far the fewest in the league among starting QBs. ... Montgomery has 354 total yards and three TDs in three games at Minnesota. ... Bears DE Robert Quinn has 3½ sacks and two forced fumbles in his past three games against the Vikings. ... Jackson leads the NFC with three interceptions. ... Cousins has the NFL's longest active TD pass streak with 34 straight games. ... Vikings RB Dalvin Cook has 1,824 total yards and 11 TDs in his past 12 home games. ... Jefferson has seven games of 140-plus receiving yards, the most in the league since he entered in 2020. ... Vikings LB Jordan Hicks is the only NFL player with at least 35 tackles, one forced fumble, one interception and one sack this season. ... Greg Joseph made five FGs against the Saints, a single-game high in the NFL this season. He became the ninth kicker in Vikings history with five-plus FGs in a game.

FANTASY TIP: Bears RB Khalil Herbert has shined in relief of Montgomery with 317 rushing yards and three TDs. His average of 6.1 yards per rush is second in the NFL among players with a minimum of 40 attempts. The Vikings have allowed seven rushing TDs in four games.