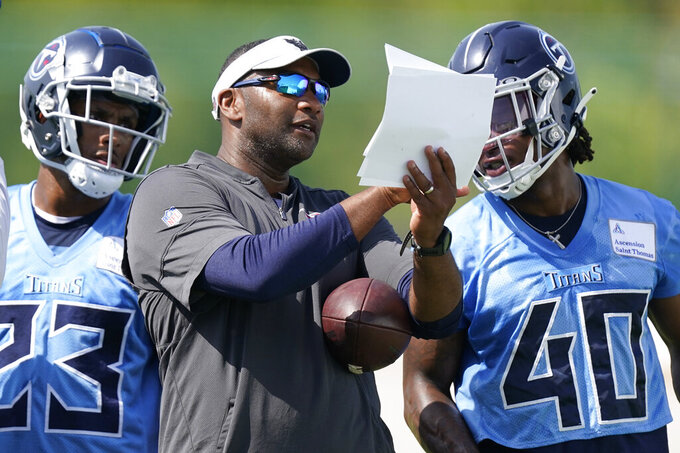 NASHVILLE, Tenn. (AP) — Jeffery Simmons showed off some of the slippery moves he uses to dodge offensive linemen when chasing opposing quarterbacks.

Yes, he wants to be a leader and play his best for the Tennessee Titans.

No, he wasn't on the field for either of the Titans' mandatory minicamp practices Tuesday or Wednesday, simply billed as “unavailable.” Both Simmons and coach Mike Vrabel said the lineman was following the Titans' plan for someone coming off the best year of his young career.

And the 19th pick overall out of Mississippi State in 2019 is leaving contract talks — if any happen — to his personal team that includes his uncle Jason Hatcher who played 10 years in the NFL. Simmons said he's focused on football.

“My focus is not on my contract,” Simmons told reporters Wednesday. "That’s why I’ve got a team around me to actually they can focus on all the contract talk and whatever it may be. If it is contract talks. So like I said, my focus is on football right now.”

Simmons does not currently have an agent listed on the NFL Players Association website. He said he has to figure out who his agent will be, news that should come out soon if he signs with someone.

The defensive lineman remains under contract with the Titans for two more seasons after Tennessee picked up the fifth-year option for 2023. Simmons is scheduled to make $2.2 million this season and $10.7 million in 2023.

Simmons is coming off the best season of his young career.

He earned his first Pro Bowl nod, and only Aaron Donald of the Rams and Pittsburgh's Cam Heyward received more votes than Simmons among interior defensive linemen in balloting for The Associated Press 2021 NFL All-Pro team. Simmons tied Chris Jones of Kansas City with 10 apiece.

Simmons started all 17 games at defensive tackle and led Tennessee with 58 quarterback pressures. He ranked second with 12 tackles for loss and third with a career-high 8 1/2 sacks. He either led or tied for the team lead for sacks in five different games. He had a team-high three sacks in the Titans' divisional playoff loss.

Donald got his contract reworked earlier this month for a hefty raise in a deal guaranteeing $65 million in the next two seasons. The Titans have a history of signing players to new contracts around the start of training camp including Derrick Henry, All-Pro safety Kevin Byard and left tackle Taylor Lewan.

Asked if he can follow Donald as the NFL's next top defensive lineman, Simmons made clear he plays football his own way.

“The way he plays the game and disrupts the game is different than everyone else,” Simmons said. “So I would say I consider myself a different player than Aaron Donald of course. And so, like I said, my job is to be the best version of Jeffery Simmons for the Tennessee Titans.”

The Titans traded wide receiver A.J. Brown, their second pick in that 2019 draft, to Philadelphia during the first round of the NFL draft in April. Lack of agreement over an extension led to the trade with Brown’s agent asking for tens of millions more in guaranteed money than the Titans originally offered.

NOTES: The Titans wrapped up the on-field portion of minicamp Wednesday, using only two of the three possible days. They are scheduled to report July 26 for the start of training camp.