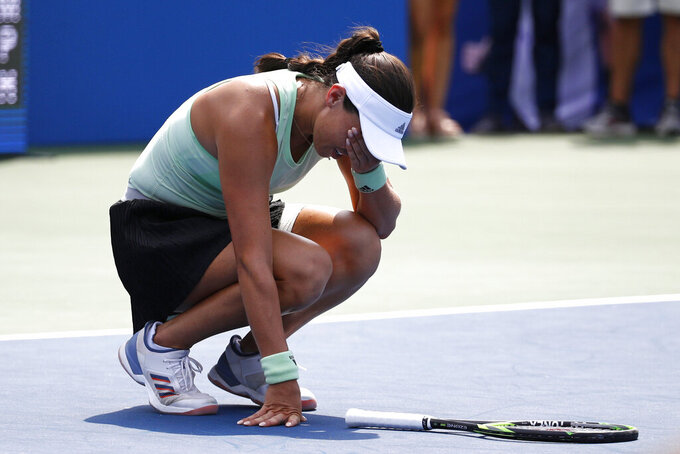 WASHINGTON (AP) — Jessica Pegula's parents are used to seeing the athletes they root for come up short: Mom and Dad own the NFL's Buffalo Bills and the NHL's Buffalo Sabres. On Sunday, their daughter was the one holding a trophy after winning her first WTA title.

Pegula, a 25-year-old American ranked 79th, picked up the biggest win of her professional tennis career by beating Camila Giorgi of Italy 6-2, 6-2 at the Citi Open.

"It's been extremely gratifying. This is what you work for: to win tournaments. It sounds cliche, (but) the journey makes it all that much sweeter," said Pegula, who recently began working with David Witt, Venus Williams' former coach.

"This week, though, it felt different. This final, I felt like I was just ready," said Pegula, who dropped to her knees on court after the final point, then celebrated with her dog, Maddie, during the trophy ceremony. "I was like: You know what? You're going to go out there and you're going to win."

She had a 4-8 record and hadn't reached the quarterfinals anywhere this season until winning five consecutive matches at Washington's hard-court tournament.

Injuries to her ankle, knee and hip have slowed her progress.

"We always say she's our first sports team — and our favorite. People often ask us which team we like better, which sport we like better, and so she's always been our first team and our favorite team," Pegula's mother, Kim, said after the Bills' practice at their training camp site in suburban Rochester, New York. "I said: She set the tone for the season now, right?'"

The Bills have made the postseason just once since 2000; the Sabres have an eight-year playoff drought.

The 62nd-ranked Giorgi was bidding for her third title.

Pegula said that Witt didn't so much make any "big changes" to her game as he gave her "a couple little things to focus on."

"Kind of helped me realize to compete for every single point and not really take off any games, take off any points," she said, "and just keep that same mindset the whole time."