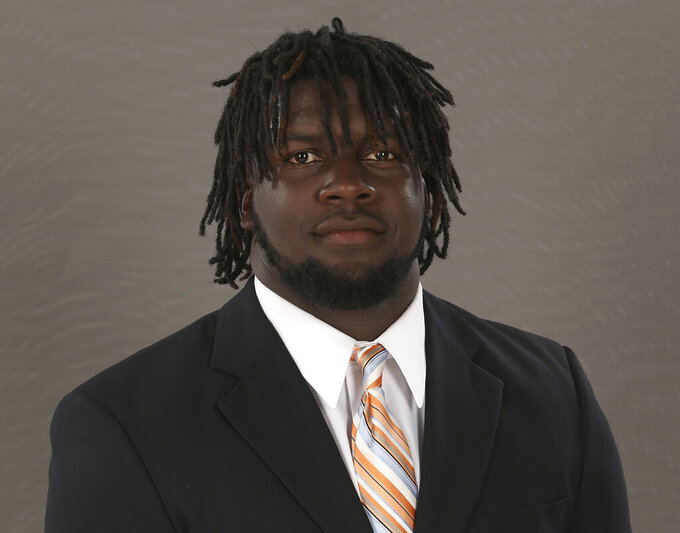 The Jets just hope the 21-year-old Polite has outgrown the maturity questions many teams had about him. He was once considered a likely early selection, but he struggled during what he called a "bumpy" pre-draft process — both physically and mentally.

"I've accepted all my flaws," Polite said during a conference call. "I've been just working on that all offseason."

Polite had 11 sacks in his junior season with the Gators, playing mainly off the edge, and is considered still a bit raw. He tweaked his right hamstring during the 40-yard dash at Florida's pro day last month and was slowed the rest of the day. The injury previously hampered him at the NFL combine in February in Indianapolis, where he ran the 40-yard dash in an underwhelming 4.84 seconds and posted a vertical jump of just 32 inches before choosing not to do any additional drills. His weight became an issue as he got up to 258 pounds, but was in the 240s when he visited the Jets.

He also made headlines for what he perceived as teams — Green Bay, in particular — "bashing" him during the interview process at the combine.

"I regret saying that (anyone) was bashing me, because they weren't really bashing me," Polite said. "They were just trying to interview a guy to come play for their team. They just wanted to see how I reacted. It was all my fault, and I learned from it.

"It was an incident that got misjudged. Things were said that didn't happen and weren't meant that way. It wasn't really that bad, if you ask me."

Jets general manager Mike Maccagnan was aware of Polite's off-field concerns, but said the team did its homework leading up to the draft. He added that a member of the scouting department also had familiarity with Polite when the two were at Florida.

"He might not have had the best spring he would've ideally wanted," Maccagnan said. "But there were definitely things there that we felt good about, in terms of the opportunity to kind of work with him and develop."

New York also drafted USC offensive tackle Chuma Edoga in the third round, trading with Minnesota to move up a spot to take him with the 92nd overall pick. The Jets gave the Vikings the 93rd pick and No. 217 overall (a seventh-rounder).

Polite led the NCAA with six forced fumbles last season, despite starting just five of 13 games. He had a team-leading 19½ tackles for loss and was selected to the AP All-America second team.

The Jets selected Alabama defensive tackle Quinnen Williams with the third overall selection Thursday night, giving New York's defensive line two promising new additions. With Williams expected to provide power in the middle as a run-stuffing pass rusher, Polite will be counted on to get to the quarterback as a mismatch on the outside, potentially as a 3-4 outside linebacker.

"This is a perfect place for me to fit scheme-wise," Polite said.

He'll also start fresh in the NFL, and is eager to put all the negative talk in the past.

"I have a lot of people to prove wrong," Polite added. "I'm ready to work. Growing up, there's always been a lot of negative things about me, and I've just worked my whole life."

The 6-foot-3, 308-pound Edoga was a teammate of current Jets quarterback Sam Darnold at USC in 2017, and he'll be tasked with helping protect the second-year signal caller on New York's offensive line.

"I blocked for Sammy D in college and now I get to block for him in the NFL, it's a blessing," Edoga said during a conference call. "It's a dream come true."

Edoga played in 44 games, including 26 starts, with the Trojans — mainly as a right tackle, where he was selected to the All-Pac-12 second team last season. Both left tackle Kelvin Beachum and right tackle Brandon Shell are scheduled to be free agents after this season, so Edoga could be groomed to replace one of the two in 2020, if not sooner.

He played both tackle spots during the Senior Bowl week, something he thinks he will be able to do in the NFL. Maccagnan added that Edoga could also potentially play guard.

Edoga also impressed teams by flashing some of the on-field characteristics that moved him up draft boards.

"I just like to use my athleticism and play with aggressiveness," Edoga said. "Try to get off the ball and hit somebody in the mouth."

After the trade with the Vikings, the Jets will enter the final day of the draft Saturday with just two more picks: a fourth-rounder (No. 105 overall) and a sixth-rounder (No. 196).

NOTES: Maccagnan disputed published reports that he and new coach Adam Gase have clashed at times during the offseason. "I think Adam and I have worked very well together," he said. "I'm sure, like in any process, there are times ... when we have different opinions on a player. From my standpoint, I've actually had a very good working relationship with Adam. Quite frankly, he has a very good sense of humor and kind of makes me laugh quite a bit."