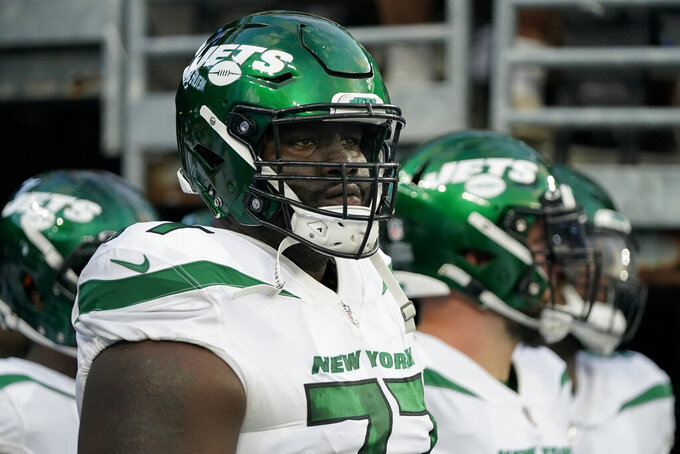 FILE - New York Jets offensive tackle Mekhi Becton waits to take the field before an NFL preseason football game against the New York Giants, Aug. 14, 2021, in East Rutherford, N.J. Becton will “more than likely” miss the entire season because of another injury to his surgically repaired right knee, coach Robert Saleh announced Tuesday, Aug. 9, 2022. Becton was having a second evaluation after suffering a chip fracture to his kneecap, Saleh confirmed, during the second play of 11-on-11 team drills Monday. (AP Photo/Frank Franklin II, File)

FLORHAM PARK, N.J. (AP) — Mekhi Becton's third season with the New York Jets is officially over before it even started.

The starting right tackle was placed on season-ending injured reserve Tuesday with a chip fracture in his right kneecap suffered during practice on Aug. 8.

Becton traveled to Los Angeles for a consultation with Dr. Neal ElAttrache, who performed arthroscopic knee surgery on quarterback Zach Wilson to repair his torn meniscus. Becton is expected to have surgery and will miss the upcoming season, which the Jets believed would be the case.

The move Tuesday came as the Jets got their roster down to the mandated 85-player limit. They also waived wide receiver Rashard Davis, offensive lineman Derrick Kelly, defensive end Tim Ward and defensive back Luq Barcoo.

It will be two consecutive lost seasons for Becton, the No. 11 overall draft pick in 2020, who dislocated his right kneecap and had cartilage damage in the knee in the opener at Carolina last year. He missed the rest of the season.

Becton was adjusting to moving to right tackle this summer after previously playing on the left side when the latest injury occurred during the second play of 11-on-11 team drills. The initial prognosis was optimistic, but an MRI later that day revealed more damage to the knee than first expected.

George Fant was projected to play left tackle after filling in for Becton last season. But Becton's injury prompted the Jets to sign five-time Pro Bowl selection Duane Brown to a two-year, $22 million deal. Brown, who has played left tackle his entire career, will remain there with the Jets while Fant will slide to the right side.