Jets' Bell has no regrets, no animosity toward Steelers 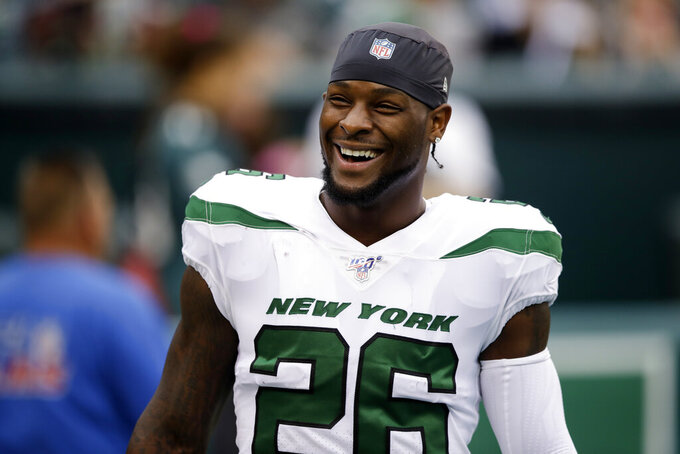 FILE - In this Oct. 6, 2019, file photo, New York Jets running back Le'Veon Bell watches before an NFL football game against the Philadelphia Eagles in Philadelphia. Bell will see lots of familiar faces when he faces his old team on Sunday. The Jets running back spent his first six seasons with the Pittsburgh Steelers, including last year when he sat out all of it in a contract dispute. (AP Photo/Matt Rourke, File)

FLORHAM PARK, N.J. (AP) — Le'Veon Bell will jog onto the field at MetLife Stadium on Sunday and spot plenty of Jets fans in the stands wearing his green and white jersey.

The New York running back knows lots of well-traveled Steelers fans will also make the trek from Pittsburgh, where he spent his first six NFL seasons. Some might even be decked out in his old black and gold No. 26, rooting for their team while also paying homage to one of the Steelers' best players in recent years.

Others might, well, remind Bell he's an enemy now.

“I think it’ll probably be 50-50," Bell said Thursday of the reception he expects from visiting Steelers fans. “I think it’ll be half that are happy to see me and still love me, and half that hate me, despise me. It is what it is.

“I’m going to show love, regardless, to everybody wearing my jersey on both sides and things like that, so that’ll be fun."

Bell facing familiar foes makes for a juicy storyline to a late-season showdown between the team he once played for that's trying to keep pace in the playoff hunt and the struggling squad he's on now that has been ravaged by injuries and inconsistency.

Still, the man nicknamed “Juice” refused to add any extra to the matchup, maintaining a reserved approach while talking about the Steelers.

“Going out there against guys that I practiced with for a long time and actually get a chance to compete against them," Bell said, “it’s going to be fun."

There's no animosity from either side, with the Steelers players also not taking any cheap shots at their former teammate.

“I love the dude," Pittsburgh defensive tackle Cam Heyward said. “Even though he's on a different team, we play football and we're trying to get after him. In the right mind, we appreciate what he's done here. He's going to be going at us, too. We don't expect him to be going light.

“We have to make sure we bring our hard hat because he's going to be trying to get some payback. I know that."

Bell was drafted by the Steelers in the second round out of Michigan State in 2013 and quickly established himself as one of the NFL's most versatile running backs.

He made three Pro Bowls during his first five seasons and put up monstrous numbers on the ground and as a pass catcher out of the backfield. Bell used a deliberate running style to become a dynamic force for Pittsburgh — and a fan favorite.

Then, came contract squabbles. First in 2017, when the Steelers placed the franchise tag on him. Then, last year, when they did it again and Bell refused to sign it. He ended up sitting out the entire season, then signed a four-year, $52.5 million contract with the Jets that included $35 million guaranteed.

But the numbers wouldn't necessarily show it.

Bell has rushed for just 676 yards and three touchdowns with an average of 3.3 yards per carry, which is a career low. He has yet to run for more than 100 yards in any game, with last week's 87-yard performance at Baltimore his season high. Bell is second on the Jets with 57 catches for 404 yards and a score, but he has not been the elite playmaking presence most expected when he came to New York.

And, because of that, some label Bell a free-agent bust.

“People look at stats and just go off the stats, which is OK," he said. “I mean, it’s not their fault. I think people who understand football and break down the film and watch it, they know exactly what’s going on, what type of player I am, how I’ve been performing.

A few things have contributed to the subpar stats, including the offensive line lacking chemistry in front of Bell early in the season. Quarterback Sam Darnold missed three games with mononucleosis, putting more on Bell's shoulders to try to right the offense in his absence. There were also reports that coach Adam Gase wasn't in favor of then-general manager Mike Maccagnan spending so much money on a running back.

Bell has been unable to completely silence the doubters with a true breakout performance. The running back also insists he hasn't gotten enough consistent opportunities to do so.

“I feel like the last few outings, though, it’s looked more like we thought it was going to look like," Gase said. “It’s hard to explain. I think when he’s got stuff there, we’re getting good yards. He’s done a good job, especially the last two or three games, of taking what they’re giving him instead of trying to create big plays. He’s keeping us ahead of the sticks."

Still, Bell refuses to look back at any of the decisions he made.

He enjoyed his time in Pittsburgh. He also looks forward to building success in New York.

“I don’t regret anything that happened," Bell said. “I’m happy where I am today."

NOTES: The Jets signed WR Josh Malone from the practice squad to the active roster. “This is a guy in practice and on the practice squad, he is absolutely killin' it out there," wide receivers coach Shawn Jefferson said earlier this week. “He's making plays everywhere. So, I'm excited one of these days to get him up and just put him in the game and see if he'll bite.” ... WR Robby Anderson (illness), OL Tom Compton (calf) and WR Demaryius Thomas (hamstring/knee) sat out practice.